NSW captain Peter Nevill could make a return to his side for this week’s Sheffield Shield final against Brisbane, depending on the arrival of his second child.

Nevill was a shock inclusion in the NSW’s 15-man squad on Monday after indicating last month he would miss the remainder of the season to be with his wife Sammy, as they awaited the birth of a baby.

He will make his return for the final against Queensland, which begins in Brisbane on Thursday, if his second child safely arrives ahead of the match. 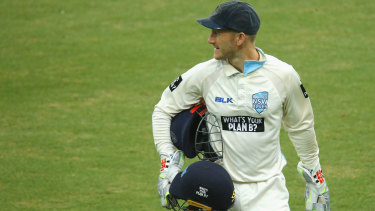 Peter Nevill could return in the Sheffield Shield final.Credit:AAP

After splitting the webbing in his right hand earlier this year, Abbott made his return on Sunday for the One-Day Marsh Cup final, which NSW won by 102 runs over Western Australia. He finished up with 4-23 from seven overs.

Nine out of eleven NSW players who featured in the Marsh Cup victory were named in the 15-man squad for the Sheffield Shield clash.

“Obviously it is a massive game for us against another good side who are in some good form,” Abbott said. 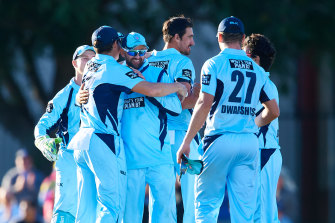 Jack Edwards, who was named player of the 50-over final after hitting 108, was also named in the Blues’ wider squad for the red-ball final.

“Super excited. I was talking to (Daniel Hughes) before and we got the Big Bash title with the Sixers and now the one-day (title), so hopefully against the Bulls we can get that third one for the season, that would be pretty amazing,” Edwards said.

Youngster Tanveer Sangha has been included as a potential debutant for the Blues but is unlikely to get a start without injury. If selected in the final the 19-year-old will receive Baggy Blue cap No. 756.

Meanwhile, Queensland will be without injured star bowler player Mark Steketee for the final. The Bulls will welcome back Jack Wildermuth, however, after the arrival of a baby to his family last week.

After finishing top of the table, Queensland earned the right to host the Shield final, which will be played at Brisbane’s Allan Border Field from April 15 to April 19.