When Leicester face Liverpool on Saturday, the most complete midfielder on the pitch will be wearing the blue of the home team at the King Power Stadium rather than the red of the champions.

Youri Tielemans has been at the heart of his side’s success.

Jurgen Klopp had a title-winning midfield packed with players who worked hard and were tactically astute. He signed Thiago in the summer in the hope of adding technical ability. But Tielemans fuses the lot and is now excelling in a deeper role under Brendan Rodgers.

Everyone in football knew of Tielemans’ potential. He had made his Anderlecht debut at the age of just 16, after all. But he arrived in the Premier League with something to prove.

“When he came in from Monaco, he was a talent, but ultimately he was not playing at Monaco, which is why the club was able to get him in,” Rodgers tells Sky Sports.

He impressed quickly and was seen as a bargain when his loan move was made permanent in the summer of 2019. An old head on young shoulders, he had actually been captain briefly at Monaco, and soon established himself as part of Leicester’s leadership group.

One has to be reminded that he is still so young. “He is 23 years of age but if you watched him you would think he was 28 or 29,” says Rodgers. “He has got a wonderful football brain. For a player of 23, I trust him in the game. Tactically, he is so strong. Technically, he can play fast because his vision is so good.” 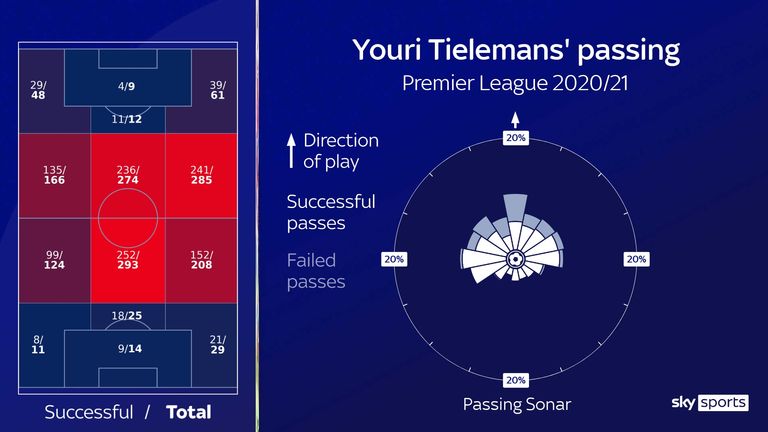 It was Tielemans’ quick thinking that allowed Kelechi Iheanacho to score Leicester’s late winner over Brighton in the FA Cup fifth round on Wednesday evening. There were many examples of his quality at Wolves on Sunday too.

Within four minutes, there was a Cruyff turn away from trouble. Moments later he brought the ball out of the sky with ease. Later in the first half, he fired a first-time left-footed volley forwards to maintain the attacking pressure on the opponents. Towards the end of the game, there was another memorable moment when his first touch allowed him to glide away from Ruben Neves.

But perhaps his most telling involvement came on the hour mark when he put in a smart tackle on Adama Traore to prevent the Wolves winger from breaking away on the counter-attack.

That defensive side of his game has evolved with time.

“What we have talked about a lot with him is the physicality of the Premier League so that we can demonstrate his qualities more,” says Rodgers. “As he has adapted to the Premier League and the speed of the game, you just see his football. It is sensational.

“He is competitive and can compete physically now. That has taken that bit of time because of the speed of the game when you come in from Europe. It is a totally different intensity.”

Tielemans covered more ground than any other Leicester player at Molineux, just as he had in outrunning everyone on the pitch in the win over Fulham prior to that.

He has become physically robust, starting all but one Premier League game and coming off the bench in the other. That ability to cope physically has allowed Rodgers to deploy him in a deeper role this season, only helping to showcase the range of his talent. 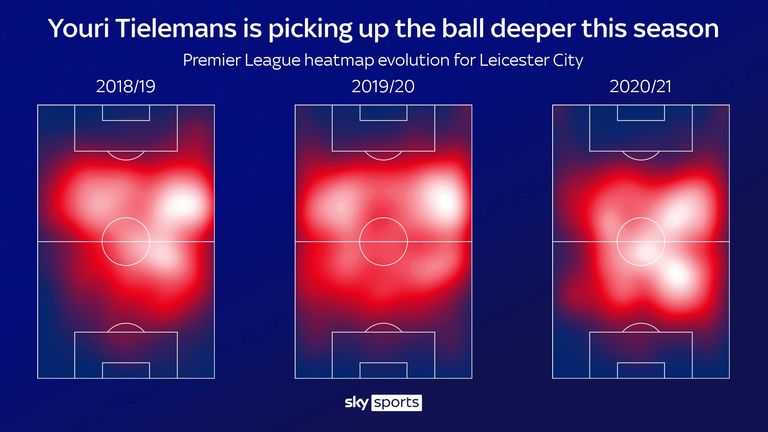 “When I first came in he was playing as an eight and I played him up there with James [Maddison],” says Rodgers.

“Then we had a slight adaption because when we did not have the physicality of Wilf [Ndidi] in the team in the early parts of the season, we came back to playing with a double pivot so that him and Papy [Mendy] could cover the ground.”

Defensively, Tielemans has done the job well. He ranks second in the Premier League for ball recoveries by midfielders, behind the more obviously destructive Pierre-Emile Hojbjerg. 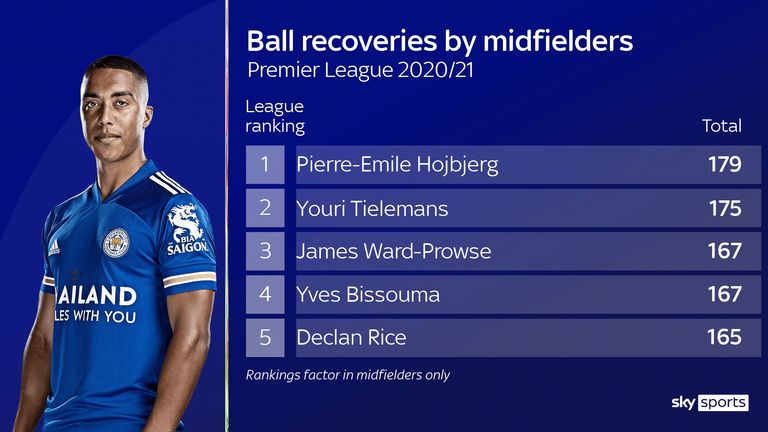 The fact that Tielemans can now do that made the positional change possible, but it was not the only factor in Rodgers’ thinking. Playing deeper also suited him when in possession.

“It was also to allow his range of passing so he could take the ball from a deeper position and serve the ball. From time to time he could still break forward and release himself to score. That role suits him perfectly. We have seen him play it with Belgium. He is a wonderful playmaker and he really gets the whole team playing.” 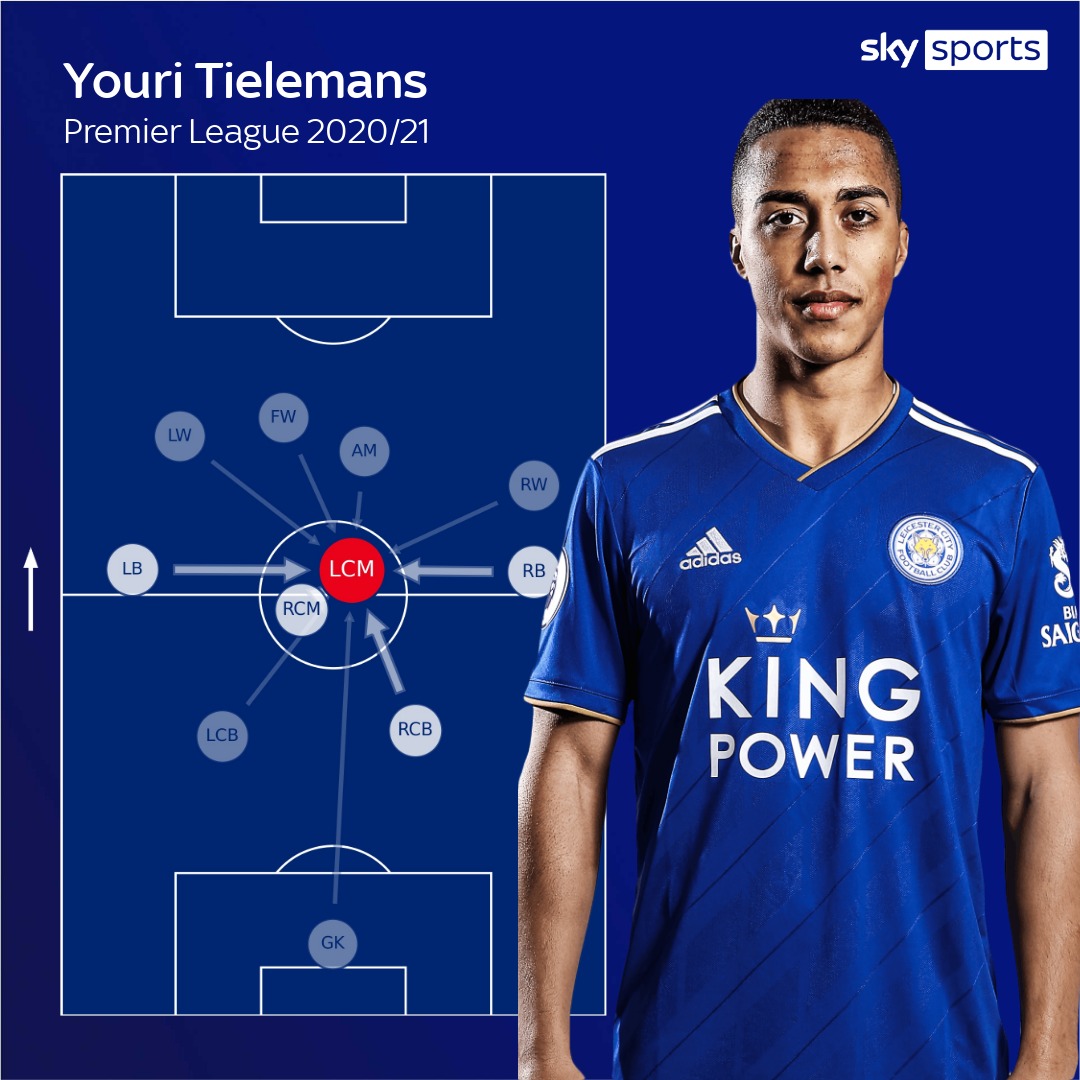 Tielemans ranks among the top five midfielders in the Premier League for touches, passes into the final third and through-balls. He is the prompter from the middle of the pitch. Rodgers sees it as just the start. He can be at the top of the game for another decade.

“He clearly had talent but he is a young player who I have really enjoyed seeing his growth in this league. He is a super professional. Leads his life to be a player. Looks after his young family. Comes here to prepare and is solely concentrated on football and family.

“He is a real joy to work with and has become a very, very important player. He is up there with the very top midfielders in the Premier League and he is only going to get better.”

Liverpool, and every other club in Europe, can only look on in envy.