Wolves 1-2 Manchester United: Ole Gunnar Solskjaer’s side warm up for the Europa League final in three days with narrow win while manager Nuno Espirito Santo bows out at Molineux

So Manchester United head for the Europa League final in Gdansk with a win and an unbeaten record in the Premier League this season.

For Wolves and their manager Nuno Espirito Santo, it ends here. United ruined his farewell to Molineux after four years in charge thanks to Anthony Elanga’s first goal for the club and possibly a last one from Juan Mata.

It meant a third straight defeat for Wolves, equalling their worst run under the Portuguese coach. Many of the supporters allowed back in for the final home game of the season gave him a rapturous reception when he stepped off the team coach and chanted ‘Nuno’s the special one’. 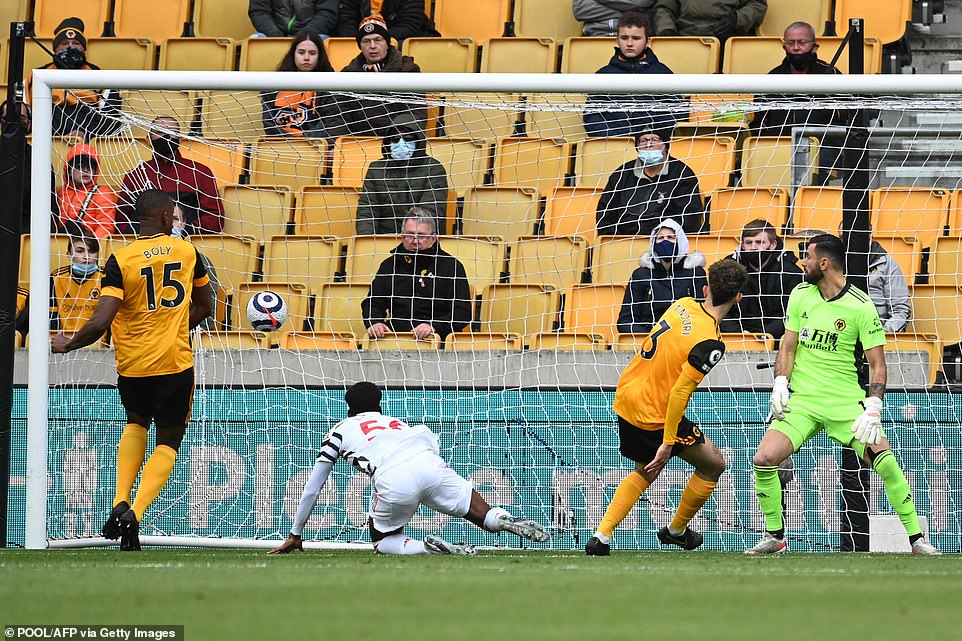 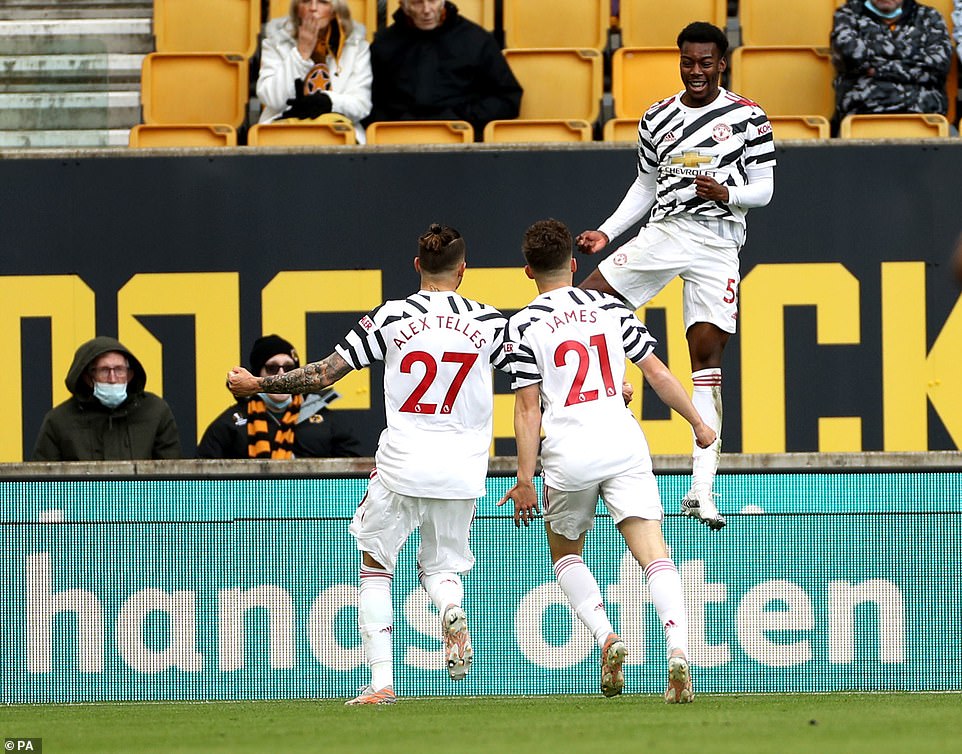 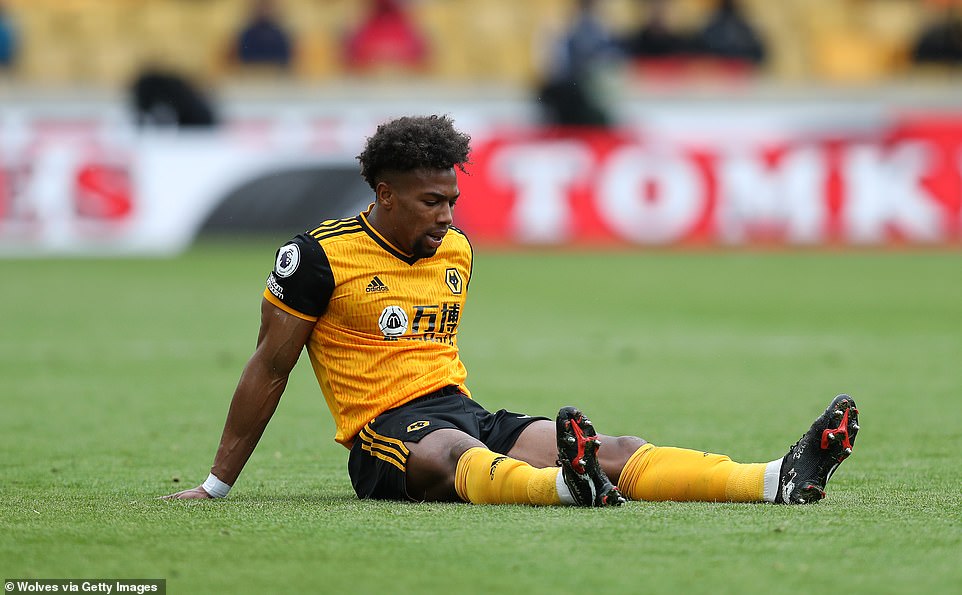 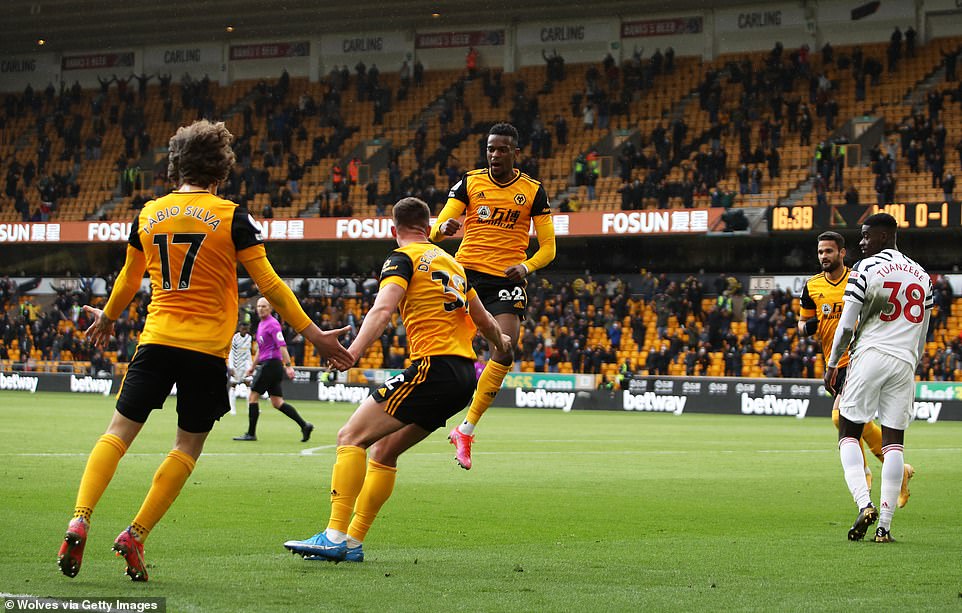 Sadly for him, it hasn’t been a special season and the owners will now look elsewhere. United haven’t been in the best of form either, two defeats and a draw at home preceding this win as they have stumbled those final few steps to a second place finish.

Wednesday’s final against Villarreal in Poland has taken precedence for some time now with Ole Gunnar Solskjaer using the opportunity here to rest many of his key players.

It put United’s club record unbeaten away run in greater jeopardy but it now stands at 26 games. They have matched the Arsenal teams of 2002 and 2004, and Preston in 1888-89, in going an entire top-flight season unbeaten away from home.

Curiously, United become only the second team from Europe’s top leagues to achieve this and not be crowned champions – a dubious record they now share with the Perugia team of 1978-79.

While Nuno took charge of his last game as Wolves boss, Solskjaer made wholesale changes with Wednesday in mind. Eric Bailly and Dan James were two players the United boss felt needed game time, while Dean Henderson’s appearance in goal here surely confirmed that David de Gea will play in the final.

Remarkably, the absence of Bruno Fernandes was the first time he has not featured in a Premier League match-day squad since making his debut against Wolves at Old Trafford 15 months ago.

‘Some of these players need minutes,’ said Solskjaer before kick-off. ‘Of course Sunday-Wednesday, we don’t want to take any risks. I thought La Liga did really well to move all the games forward for Villarreal. Why don’t we look after our own?’

United started brightly on a blustery day at Molineux and Elanga had already missed a couple of half chances when he put them ahead with an emphatic header in the 13th minute.

The goal owed much to a fine run down the left and pin-point cross from Dan James who picked out the teenager on the edge of the six-yard box. Rayan Ait-Nouri had tracked Elanga’s run but the latter showed more hunger to get to the ball first and power it past Rui Patricio.

Almost all of Wolves’ best early moves came down the right through Adama Traore and they threatened when he beat James and whipped in a cross for Fabio Silva to head wide. 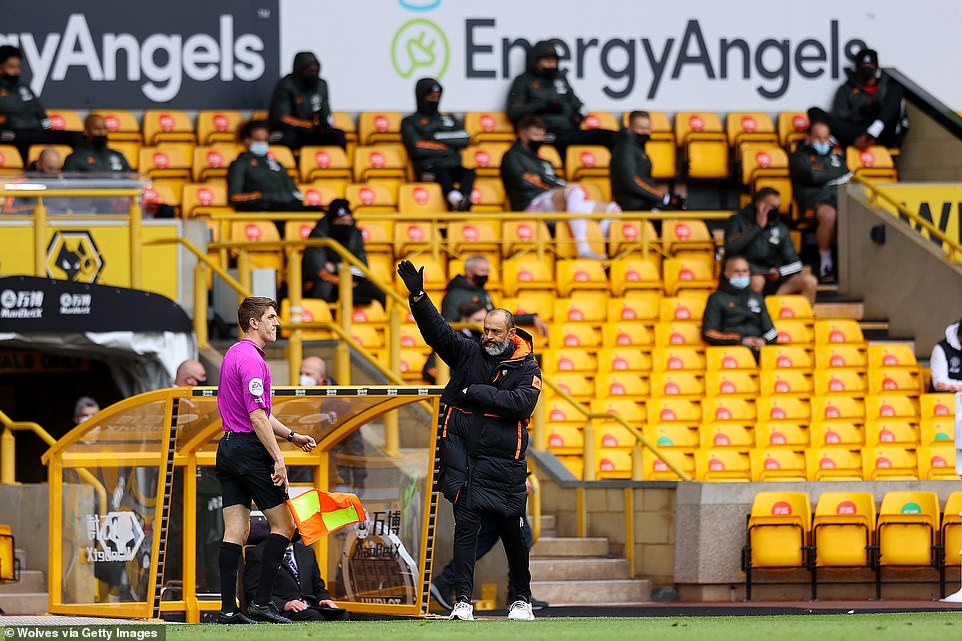 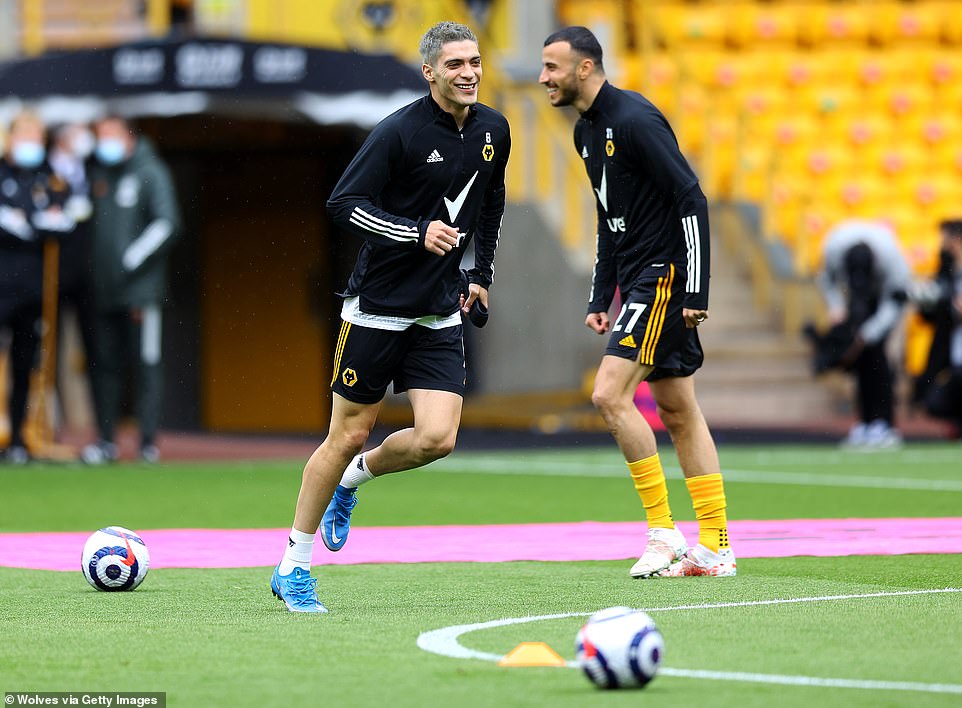 The hosts received another pre-match boost, with talismanic striker Raul Jimenez (left) warming up after a long absence

But shortly after the Spaniard had failed to win a penalty from referee Mike Dean, he went down with a hamstring problem before limping off to make way for substitute Willian Jose.

Even so, Wolves were still able to find an equaliser in the 39th minute as they opened up United with a fine move. It ended with Silva slipping the ball inside for Nelson Semedo who swept it beyond Henderson with his right foot.

The home side deserved to be all square at the break but United raised their game again and regained the lead in added time at the end of the half.

Donny van de Beek had just been guilty of completely fluffing a volley in the windy conditions when he set off on a run across the penalty box. Romain Saiss appeared to clip the Dutchman first before Semedo’s challenge sent him tumbling to the ground. 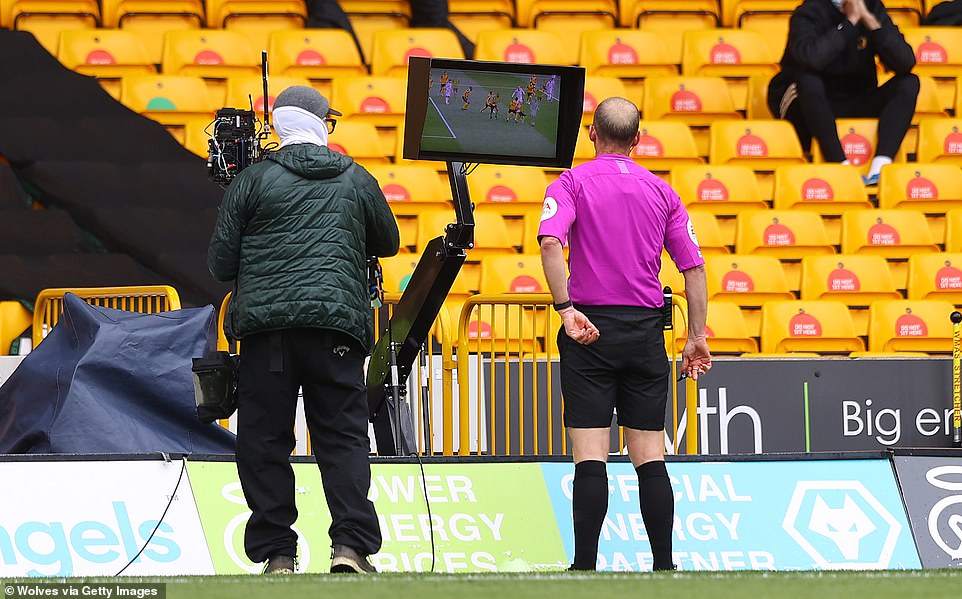 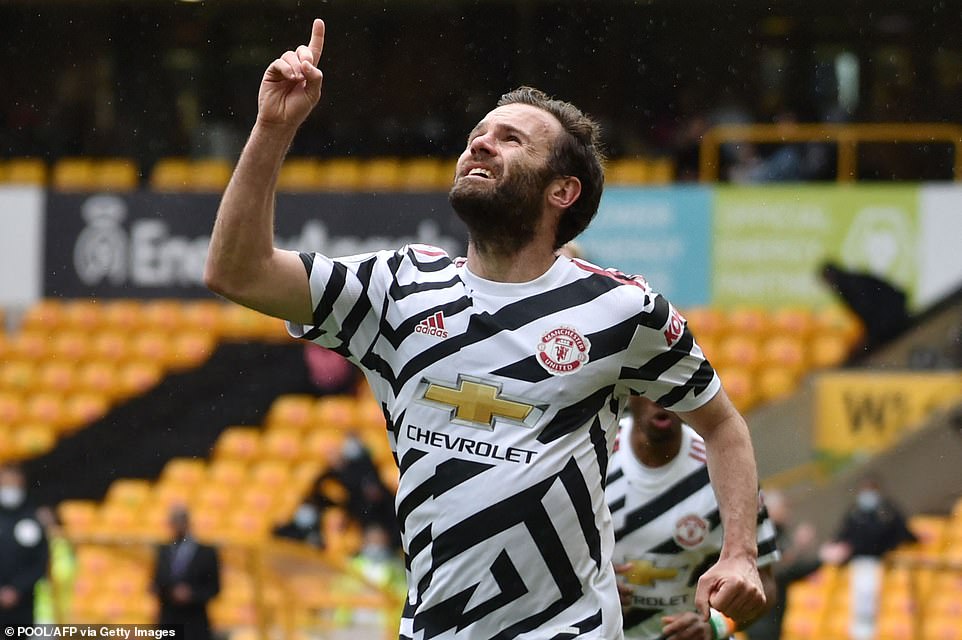 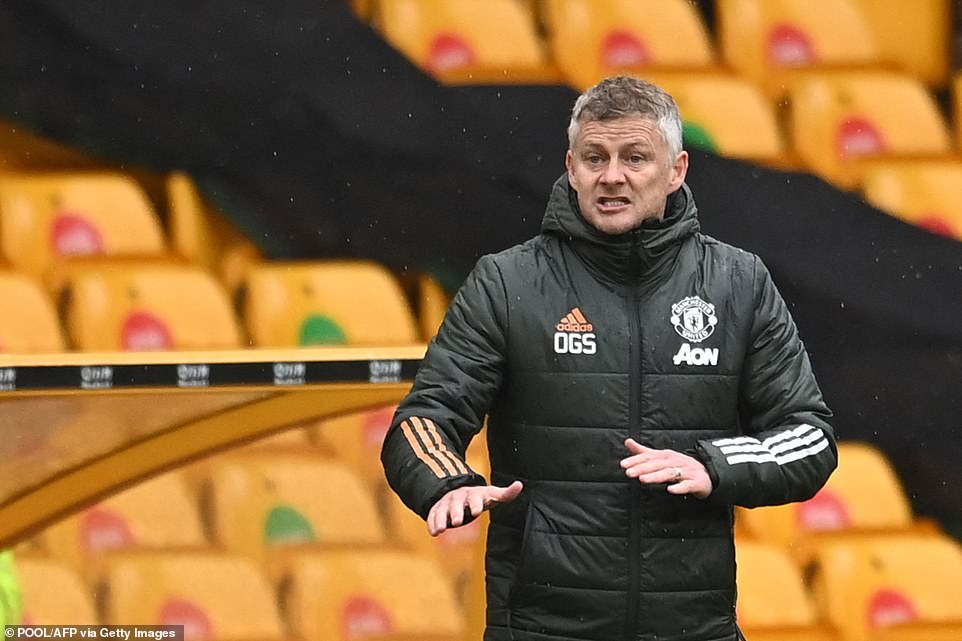 It didn’t look as though Dean was going to award a penalty but VAR had another look and Andy Madley advised his colleague to check the pitch-side monitor. Dean pointed to the spot and Mata never looked like he was going to miss.

He has been a fantastic servant for United if this does prove to be his farewell game after more than seven years at Old Trafford, it’s just a shame when he departed in the 82nd minute there were no United fans there to acknowledge it.

James wasted the best chance of the second half when he was sent though by Amad Diallo but tried to dink the ball over Patricio and ended up scuffing it wide.

But United had done enough. They go to Gdansk on a high note even if it will be a very different team and occasion on Wednesday night.