Sven Mislintat has made a career out of finding value in places where others don’t bother to look. Take, for example, the signing that cemented his reputation as one of football’s top talent-spotters: Shinji Kagawa.

Kagawa was toiling away in Japan’s second division at the age of 21 – barely known within his own country, let alone outside it – when Mislintat came calling. Having scoured videos of the midfielder playing for Cerezo Osaka, and after six visits to the Far East, he convinced Borussia Dortmund, where he was chief scout under then-manager Juergen Klopp, to trigger his meagre $543,480 (€350,000) release clause. 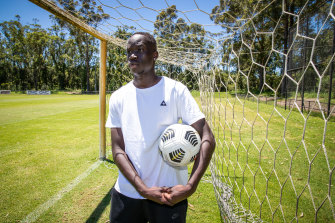 Alou Kuol is heading to Stuttgart at the end of this season after a breakout campaign for the Central Coast Mariners.Credit:Edwina Pickles

He was a revelation. As Dortmund won the next two Bundesliga titles, Kagawa scored 21 goals and laid on 13 assists in 49 games. Then they sold him to Manchester United for a reported $21 million.

It was brilliant business, but just the start for the man who has since earned the nickname “Diamond Eye”. Robert Lewandowski is regarded as one of the best strikers on the planet – but it wasn’t until Mislintat brought him to Dortmund from Polish side Lech Poznan, the same summer they signed Kagawa, that others started to see it.

Ousmane Dembele, Christian Pulisic, Pierre-Emerick Aubameyang, Mats Hummels – the list goes on. All are global superstars now, but all were diamonds in the rough, uncovered by Mislintat. Each deal made Dortmund a tidy profit, too.

So what choice did Alou Kuol really have when the emerging Central Coast Mariners star received an offer from VfB Stuttgart, where Mislintat is now sporting director?

“I researched him and I knew straight away, he was the one,” Kuol said.

“Their sporting director Sven, the one that wanted me there, his resume is too big for me to turn down. Someone like him coming to knock at my door, I couldn’t say no. It’s ridiculous.”

Kuol, 19, never planned on leaving the A-League this soon – he has played only 550 minutes this season, primarily as a bench weapon. But opportunities this good are rare for Australian footballers.

His agent, John Grimaud, has a long-standing relationship with Mislintat, who needed little convincing that Kuol was another gem once he found out about him.

“There was a Belgian side that was interested in me and I was really keen on signing with them,” Kuol said. “Then [Grimaud] came back to me like two days later, saying there’s another side in Germany that’s interested. I thought it was going to be a league two side or three, and then next minute, it’s Stuttgart. I was shook. 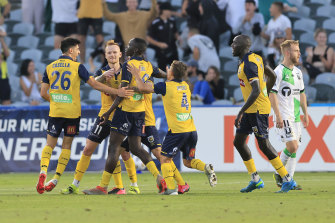 Alou Kuol celebrates a goal for the Mariners in February.Credit:Getty

“They told me about their plans and ambitions for me. They want to see me develop – all things I like to hear. They were really keen, so I was happy enough to want to join them.”

Many fans reacted to the news of Kuol’s impending transfer with caution. It’s been a while since an Australian player moved to a club so big at such a young age and made a success of it. Some said it was way too early, others predicted he’ll be back in the A-League soon enough with his tail between his legs.

Kuol isn’t interested. “I reckon I can do it,” he said.

“I don’t really care about what they say. At the end of the day, I’m doing it for myself – I’m not doing it for them. I’m happy with this move, so I don’t really care if they’re not happy. That’s their issue. I’m not even worried. This will really test how well I can adapt to high-level football. We’ll see how we go but I reckon I’ll definitely be ready for it.”

The prospect of moving to another country doesn’t faze him – being a refugee probably helps with that. Nor does throwing himself into the notoriously cut-throat European football environment.

“It’s come very quick, but I don’t get frightened by these situations. You make friends along the way,” Kuol said. “I find it a lot easier to make friends. Language barrier will probably be one thing, but I’m not just like a regular foreigner. I know what it feels like to move to a new country. I can adapt easier than others.”

Kuol will move to Stuttgart at the end of this season, and is likely to spend his initial period in the club’s reserves, honing his technical ability and tactical awareness. Importantly for him, the deal will be a massive financial boost for his hard-working family, while the Mariners will receive a six-figure training compensation fee and a guaranteed slice of future transfers.

The good news for A-League fans is the Kuol legacy will live on after he leaves. Two of his younger brothers have signed youth deals – Teng, 17, is at Melbourne Victory, while Garang, 16, is in the Mariners’ youth program.

“He’s flying. He’s loving it here. He hasn’t looked back once, he’s that into it,” Kuol said of Garang. “Half the family might move up to the coast to support Garang and live up here.” _

In the meantime, it’s all about smashing the Duolingo app on his phone, and giving everything he has while he still can to the Mariners, who gave him a chance when the three clubs from his home state, Victoria, overlooked him.

“We’ve had a recent dip in form but we’re really working hard to pick it back up,” said Kuol, who will face Sydney FC at Central Coast Stadium on Saturday.

“We really want to finish this season in first [position], that’s my first goal, and then to win the finals. That’s how I want to end it here. I’m working hard to achieve that with the team.

“This community has welcomed me with open arms. Since I’ve been here, I’ve loved every moment of it, I really love this place. I really appreciate all the fans and everybody here who’s supported me. And I really love the coast – one of my favourite places in the world.”