He's the David Beckham of Japanese soccer. Except Beckham hung up his boots at 38, and these days lives a comfortable life as a fashion model, luxury brand ambassador, business mogul and part-owner of two clubs.

Kazuyoshi Miura is a few of those things, too. Like Beckham, he also married a pop singer. But unlike Beckham, he's still playing. 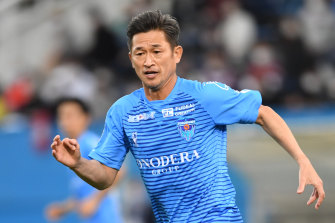 When the new J.League season kicks off next month, Miura will be 54 – making him comfortably the oldest active professional footballer on the planet.

"My aspirations and passion for soccer are only increasing. I want to work hard and play more games," he said earlier this month when he penned a new one-year contract with Yokohama FC.

Miura is old enough to have fathered most of his teammates. In fact, he's four years older than his coach. He played his first senior match in 1986 – the same year Alex Ferguson first took over Manchester United.

Why is he still going? The short answer is because he can – thanks to good genetics, an unwavering commitment to fitness and conditioning, and a love for the game that runs as deep as his famed humility. 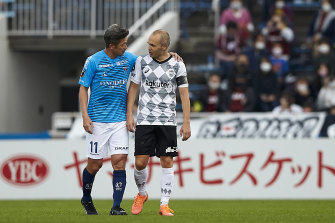 "For sure, it takes me longer than the younger players to recover," he told the BBC last year. "But even though it’s very hard, I have this passion of wanting to play, so that keeps me going."

The longer answer points to a perfect storm of unique circumstances – physical, cultural, financial – that have prolonged a career that nobody in Japan wants to see end.

Miura – or 'King Kazu', as he's better known – is the country's second-highest all-time scorer and first true soccer superstar. At the age of 15, he moved alone to Brazil to forge a career with famous clubs including Santos and Palmeiras, before returning home to Japan, where his rise to national prominence coincided with the launch of the J.League in 1993.

Pretty much ever since, he's been unable to walk the streets in peace.

His name may ring a bell to A-League fans. That's because in the competition's very first season, Miura signed a guest contract for Sydney FC in 2005.

Lou Sticca, the Australian agent who helped broker that deal, received an unsolicited offer from a colleague: Dentsu, Japan's biggest advertising agency, were offering to pay for Miura, who was 38 at the time, to play for Sydney in the FIFA Club World Championship in Japan to generate interest from local media and fans.

"It was too good to be true," Sticca said. "It might have sounded a bit gimmicky at the outset. But we thought we had nothing to lose." 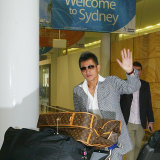 ‘King Kazu’ brought some glitz and glamour to Sydney FC in their first season.Credit:Getty

When Miura touched down in Sydney, wearing an audacious checked blazer and carrying Louis Vuitton luggage, it was a frenzy. Japanese tourists flocked to training sessions and A-League matches to catch a glimpse of him.

"He brought his own masseuse out here," Sticca said. "I'd go and see him in his hotel and while everyone else was out and about, he'd be icing his legs for four or five hours a day. But I suppose that's why he's still running around today."

A few weeks later, Sticca was part of Miura's entourage in Japan as they caught a bullet train at Tokyo Station before one of Sydney's matches.

"I'll never forget this until the day I die," he said. "There were thousands of people on the platform. When they realised it was Kazu, it was like Moses parting the Red Sea. They didn't push, they didn't scream, they didn't yell. He just walked through. The way that people just peeled away, I've never seen anything like it, ever."

Not much has changed, nearly 16 years on. Miura is still a megastar, even though it's been so long since his peak that many fans have forgotten – or perhaps are too young to have ever known – just how good a player he was.

He can still hold his own on the field, although his contributions are extremely limited. He hasn't scored a goal in three years and is used only a handful of times per season off the bench. 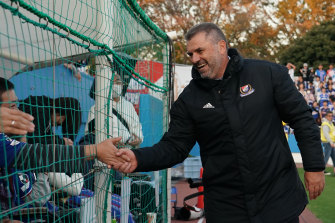 It took a while for Ange Postecoglou to come to terms with the unique aspects of Japanese culture that have enabled Miura’s career to last for so long.Credit:Getty Images

Each time, though, it's an event not to be missed.

"They have a real respect for their legends of the game. Players of Kazu's stature, they decide when they retire. It's not the club.

"It is unusual but probably Japan's the one country where that kind of thing doesn't turn into a circus. It's not a marketing stunt, it's just the way they treat people in their game. Every team in the J.League will have a player in their ranks that's 39, 40 – it's quite normal.

"He's such a nice guy. You always say to players, don't give up the game for as long as you can – well, he's taken it to an extreme, that's for sure."

While it may not be purely a stunt, there is a heavy marketing aspect to it. For Yokohama FC and the J.League at large, Miura is still a money-spinner. Every time he signs a new contract, foreign media latches onto the story, and Yokohama FC sells more jerseys, memberships and sponsorships.

As Dan Orlowitz, a football writer for The Japan Times, explains, while others might see it as degrading, Miura has made peace with his reputation as a kyakuyose panda – someone so famous they can pull a crowd on their own, like the panda bear that draws customers to the zoo.

"Right now, there aren't enough negatives to outweigh the positives," said Orlowitz, who has lived in Japan for the past 14 years.

"Whatever they're paying him, they're getting back way more. The J.League loves it, they get to milk him for all he's worth. Of course nobody wants to give that up. But I don't think people are going to prop him up because of that – that's his choice.

"At this point, we're all resigned to having to do the Kazu story every year. When we do it for the last time it will be a dark day, but it will also be like, 'OK, thank you for your service, now we can move onto the next thing.'"