Manchester United midfielder Paul Pogba is excited about the prospect of Jadon Sancho joining the club this summer, according to French football expert Julien Laurens. Pogba is claimed to be “convinced” by the United project and believes Sancho would be helping take the club in the right direction. The France star looks set to stay at Old Trafford and could be handed an extension to his current contract.

Pogba’s agent Mino Raiola stated the 27-year-old would not be leaving United at the weekend.

Laurens says there is no club who would be able to afford Pogba right now anyway.

But the midfielder thinks the coming season could be “exciting” for United, especially if Sancho arrives from Borussia Dortmund.

“If you’re Raiola or Pogba, there might not be anyone bringing the money to United right now to come and get you,” Laurens said on the Gab and Juls podcast.

JUST IN: Arsenal explored two signings before Gabriel as Man Utd miss out 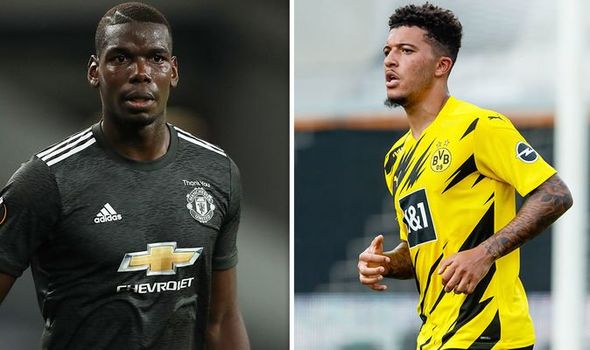 “Real Madrid is his dream but they’re not going to spend £100m on him this summer, they don’t have that money and they don’t want to anyway.

“So it’s good for your own strategy in a way to say: ‘Okay, we’re going to stay, let’s open talks for a new deal’.

“I think he’s convinced also by the project. If they go and sign Sancho, plus what they’ve built this season, I think he knows this could be an exciting thing to be part of.”

Raiola confirmed talks are set to be held with United over a new contract for Pogba.

“United will not accept any bid this summer,” Raiola said.

“We’re going to speak about a new contract soon, no stress.”

And Sky Sports reporter Dharmesh Sheth claims the two clubs are as far away from a deal as ever.

“It’s gone a little bit quiet as far as Jadon Sancho is concerned,” Sheth said on The Transfer Show.

“The information that I got this morning was that if United do not sign Jadon Sancho in this transfer window, there is a chance that Jadon Sancho will never become a Manchester United player.

“It should be said that Jadon Sancho is willing to move to Manchester United and not only that, he’s ready to move to a club that is the biggest rival of the club that he left when he went to Dortmund, in Manchester City.

“But as it stands, we are as far away from Jadon Sancho going to Manchester United as we’ve ever been.”