Manchester United star Bruno Fernandes was spotted practicing his knee-slide celebration in training ahead of the club’s vital Premier League clash with Leicester on Sunday. The Red Devils go into that showdown with their hopes of securing Champions League football hanging in the balance. Ole Gunnar Solskjaer’s side will return to the big time with a victory or draw at the King Power Stadium – something that seemed unfathomable back in January.

Manchester United have overturned a 14-point difference to sit above Leicester going into Sunday’s blockbuster Premier League clash at the King Power Stadium.

The Red Devils are unbeaten in the top flight since January, when they slumped to a 2-0 defeat to Liverpool at Anfield.

Fernandes has been key to United’s resurgence, scoring seven goals and registering seven assists since his arrival from Sporting Lisbon seven months ago.

And, ahead of the match against Leicester, the 25-year-old was spotted practicing his knee-slide celebration.

United players seemed to be in good spirits in training, with many smiling and appearing relaxed in front of the cameras.

Paul Pogba was one of the players with a grin on his face, despite making a horrendous error in the 1-1 draw with West Ham on Thursday. 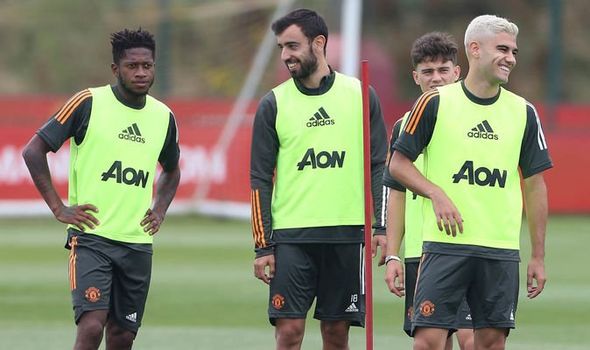 And whether United can end their season on a positive note is something only time will tell.

Speaking ahead of the match, Solskjaer admitted that he and his players were looking forward to locking horns with Leicester.

“We’re looking forward to the game,” said the Norwegian.

“We’ve given ourselves a good chance of being in the Champions League next year. We can’t go into a game thinking about what the outcome could be.

“We just have to go and perform and perform to a high enough level for us to get a result. We want to go there and dominate the game – we wanted to get to this position having to go Leicester to need to beat them. 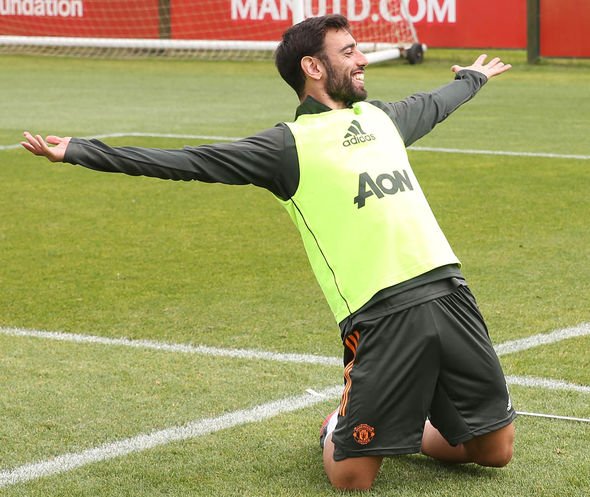 “We’re not going to change our approach. We want to go there to try and win the game.”

While United have been in fine form since the turn of the year, they’ve recently hit a rough patch going into the biggest match of their season.

They slipped to a 3-1 FA Cup semi-final defeat to Chelsea last weekend, easily being outplayed by the Blues on a chastening night at Wembley.

And, after that, they could only manage a 1-1 draw with West Ham in their Premier League clash.

Despite United suffering a dip in form of late, Solskjaer has expressed a belief that confidence levels within the squad remain high.

“Confidence levels are high because we’ve given ourselves a great chance of going into the last game,” he said.

“And you’d expect when the last game of the season is in front of you, you’d expect any team to have some bruises, aches and tiredness.

“It’s natural in any player. Even though this season has been different, it still has been a draining season one for everyone, but we’ve got enough energy for 90 minutes. There will be injury-time as well!

“It’s been a great effort by everyone getting to this position and now it’s just a game to go.”