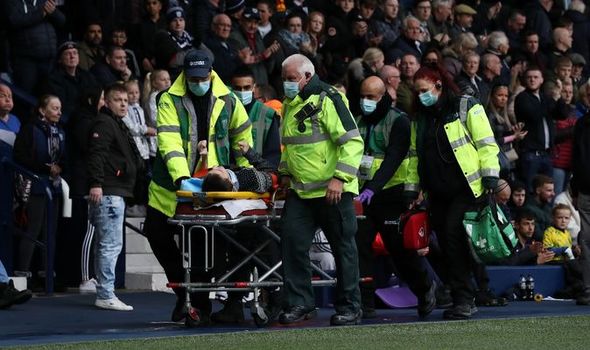 A medical emergency inside The Hawthorns forced West Brom’s game to be postponed by 15 minutes after a fan received medical attention. The Baggies were getting ready to face off against Bristol City when a “medical emergency” occured in the stands with a supporter requiring attention.

An alert paramedic team were quickly on the scene to put him on the stretcher, but there were positive signs as he was carried away.

The supporter was spotted ‘smiling and clapping’ to the reception from the crowd as he was stretchered out the ground.

It was not immediately clear what had happened to the supporter in the stands.

But the incident meant kick-off was delayed by 15 minutes with West Brom and Bristol City both providing an update on social media.

West Brom tweeted: “Owing to a medical emergency involving a fan inside the stadium, kick-off has been delayed by 15 minutes.

“Our thoughts and prayers are with the supporter. We’re all with you.”

While Bristol City wrote: “Kick-off has been delayed 15 minutes because of a medical emergency involving a supporter.

“The thoughts of #BristolCity are with those affected.”