Cortnee Vine declared during the week that Matildas coach Tony Gustavsson was ignoring a whole generation of players in their early-to-mid 20s and on Saturday afternoon, she showed why she felt so strongly.

With Gustavsson watching his first A-League Women’s match from the stands, the 23-year-old put in a dazzling display in Sydney FC’s 3-1 win over the Jets at Netstrata Jubilee Stadium, setting up two goals and scoring another in the opening round of the season. 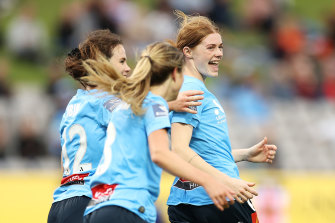 Cortnee Vine celebrates her goal against the Jets.Credit:Getty

While Vine was the stand-out performer in a dominant win over Newcastle, she was not the only Sky Blue to impress. Central defenders Ally Green, 23, and Natalie Tobin, 25, gave quality auditions for a spot in the Matildas’ backline while Remy Siemsen showed why she already has a Matildas cap to her name with a fine goal. On another day, she could have been celebrating more.

She was denied an early opener when Jets goalkeeper Claire Coelho somehow blocked her half volley from inside the box. Siemsen was the most lively in the first half as Sydney FC pulled the strings in possession, opening up space out wide and even threatening from distance. Princess Ibini rattled the upright from 25 metres out.

The Sky Blues eventually got their breakthrough seven minutes after the restart. A clever back heel through ball from Vine put Siemsen into space and the Matilda outmuscled Jets defender Hannah Brewer to slam a powerful shot into the back of the net.

Vine was on fire in her comeback match after a knee injury, proving the architect for Sydney’s second six minutes later. She set-up Ibini for an easy tap-in at the far post with a clever square ball across the box. Coelho was seemingly all that kept Newcastle in the contest after the hour, producing yet another superb save against a powerfully struck shot from Siemsen.

Just as the visitors looked to be in damage control, they pulled one back with a swift counterattack against the run of play. Taking down a long ball, substitute Lauren Allen held off a challenge from Sydney’s Taylor Ray to squeeze a shot underneath goalkeeper Jada Whyman.

However, any hopes of a comeback were dashed within minutes. Having provided two, Vine nabbed a deserved goal of her own. Ordinary marking on a corner opened space for Vine to finish from close range and make it 3-1 in the 69th minute.

The last embers of hope of a result for Newcastle were put out when Tiana Jaber was dismissed in the 79th minute, receiving a second yellow for a late challenge on Ibini.