Sevilla defenders Diego Carlos and Jules Kounde have been backed for a big move to the Premier League by former Manchester United midfielder Owen Hargreaves. Carlos and Kounde lined up at the back for Sevilla for the Europa League semi-final against United on Sunday. And ahead of the match, Hargreaves was full of praise for the duo.

Carlos, 27, only joined Sevilla from Nantes in 2019 but has been linked with a move to Premier League champions Liverpool, as well as Chelsea and Arsenal.

Meanwhile, Kounde, 21, came through the ranks at Bordeaux before also moving to the Spanish club last year.

Hargreaves believes there will be plenty of interest in the pair following the United clash and reckons Chelsea or Arsenal could be two of the clubs in for them. 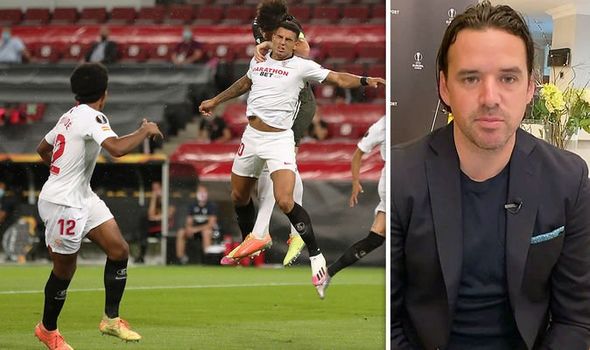 “I think he is a fabulous player, Brazilian, 27, is rugged, can compete, really good player.

“They’ve got a young Frenchman, Kounde, who plays right next to him, only 21.

“These two guys are fabulous and I promise, I think after this game everyone’s going to: ‘How come Chelsea or Arsenal don’t sign these players?’, everyone. These guys can play.

“I think everybody’s going to be looking at these players.

“Monchi signs players that other teams don’t sign and then in the end they sell them to bigger teams.

“These guys after this game, against the brilliant front three of United, if they play as well as they normally do, I think everybody’s going to be looking at them for a big move, they’re that good.”

Both Chelsea and Arsenal are in the market for a centre-back this summer.

Chelsea are interested in Brighton captain Lewis Dunk, who is valued at £40million.

Serie A side Napoli are also interested in signing the 22-year-old.