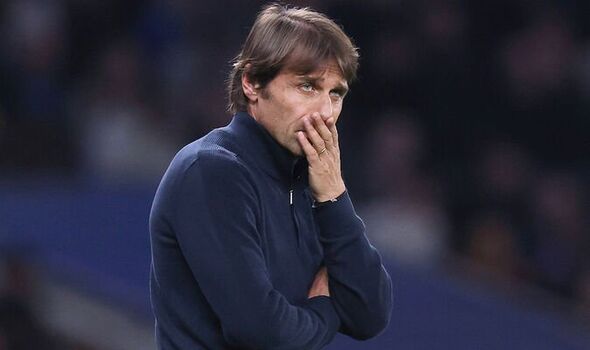 Tottenham forwards Harry Kane and Son Heung-min have been tipped to finally leave the club if Antonio Conte fails to win a trophy this season. Former Aston Villa captain Gabriel Agbonlahor says the duo may quit Spurs as they seek silverware.

Conte’s main mission this season is to end Spurs’ wait for a trophy. The north Londoners last tasted trophy success in the League Cup under Juande Ramos in 2008.

Tottenham are third in the Premier League, with Manchester City strong favourites to win their fifth title in six seasons. They were unable to secure qualification out of their Champions League group on Wednesday but can still do so with a point away at Marseille next week.

Domestic cup competitions may be their best shot at competing for honours. But if success doesn’t arrive, Agbonlahor can see the two star players forcing a move away.

He said on talkSPORT: “We spoke about Harry Kane as well, he could be one that looks at a Bayern Munich move. I didn’t think he’d want to go because of the goals record but Son wants to win trophies.

“He wants to win stuff and I don’t think he’s going to do that at Spurs. Harry Kane might have the option to go to Bayern Munich, he might have to choose that as well to win trophies.

“What if they don’t win anything this season? And you come to the summer, don’t you think Son and Kane are going to be thinking ‘we need to move now’.”

Kane has scored 11 goals in 17 appearances for Spurs so far this season. Son is the club’s second-leading scorer with just five strikes to his name.

WIN A FREE ENGLAND SHIRT FOR THE WORLD CUP!

Kane, who has long been linked with a move away from his boyhood club, sees his contract at Tottenham expire at the end of next season. Spurs will want to keep hold of their talismanic forward but also ensure he does not leave for free in 2024.

Son’s deal does not come to an end until 2025. But ex-Spurs striker Alan Brazil says the South Korean is far more likely to leave than Kane.