Wales start their campaign against Switzerland in Baku on Saturday and Gareth Bale insists his side are under no pressure to match their results from 2016.

Bale became a national hero when leading his country to a semi-final in 2016.

Bale is one of eight survivors from the Wales squad that reached the last four in France when Chris Coleman was in charge, and the Real Madrid star is looking no further than the crunch first game against the Swiss – a game being played in far away Baku.

“I think it’s similar,” said Bale when asked at his pre-match press conference about Wales’ expectations heading into Euro 2020 compared to last time out. 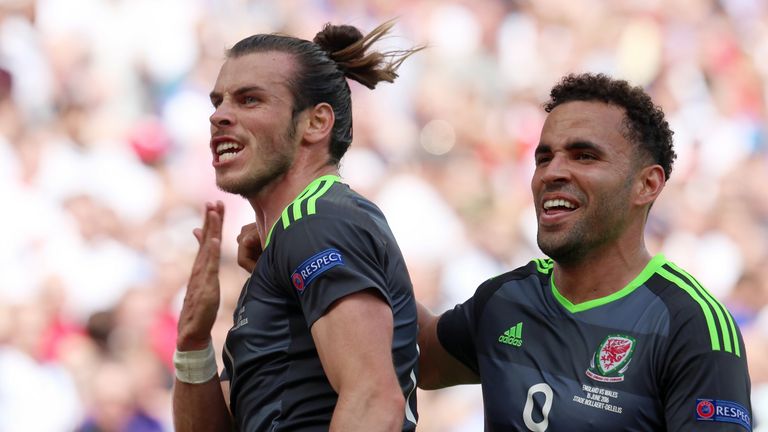 “Coming on the back of 2016 people will argue that maybe we should be doing things, but we have a different team and it’s a different tournament.

“We have a very difficult group to get out of, which we had last time.

“We know the qualities of Italy being such a big nation with the history. Switzerland are a top-ranked team and Turkey have proven over the last 12 months they’ve beaten some big teams as well.

“It’s difficult to say who the favourite is, but we’ve got some very difficult games ahead and we’ve prepared for everyone.

“Our mentality is to try and get out of the group – and we’ll take it from there.”

Wales have had a difficult build-up to Euro 2020 off the pitch with Robert Page in interim charge. He has won four of his eight games at the helm – the only defeats coming against the world’s top two ranked teams Belgium and France – but Bale has yet to score under him.

Page has been at the helm since November with manager Giggs on leave to address court charges, which he denies.

“Of course, I’ve been in touch and he wishes us all the best. He sent well wishes and he is fully supportive behind the team.”

Denmark host Finland in the day’s second fixture in Group B. Despite the lack of a big-name striker, the free-scoring Danes have netted 17 goals so far in 2021 and conceded only once, in a recent friendly against Germany.

Finland’s chances will be dependent on whether or not goal-poacher Teemu Pukki, who scored 10 goals as the Finns came second in their group to qualify, will be fully recovered from an ankle injury.

Coach Markku Kanerva says his side is relishing the challenge. “Denmark are a really tough team and they get to play on home soil, but we have proved we can challenge even bigger countries than Denmark,” he told UEFA.com.

With group rivals Belgium and Russia meeting later on Saturday in St Petersburg, the Finns know that a good start will be essential.

Wales vs Switzerland: Aaron Ramsey has won his fitness battle for Wales’ Euro 2020 opener. Ramsey sat out Wales’ penultimate training session on Thursday after building up his fitness in recent weeks, but he will be involved at Baku’s Olympic Stadium.

Denmark vs Finland: Denmark should be able to name their strongest side, with Kasper Schmeichel, Simon Kjaer, Christian Eriksen and Martin Braithwaite all expected to start. Teemu Pukki should be fit after playing 30 minutes in Finland‘s last friendly, while captain Tim Sparv is expected to return after missing the defeat to Estonia.

Belgium vs Russia: Belgium boss Roberto Martinez has ruled out Kevin De Bruyne for his side’s opener following the facial injury he picked up in the Champions League final. It’s also unclear whether Eden Hazard is fully fit to start, having been a substitute in both of Belgium’s warm-up friendlies. Artem Dzyuba is expected to lead the line for Russia, but they will be without defender Fedor Kudryashov due to a calf problem.

Gareth Bale: Eight clean sheets in 11 games since the start of 2020 points to Wales’ defensive strength, and this will lay the foundation to any success this summer, but they will be reliant on Bale to provide the star quality in attack.

The player has been coy over his future at club level – stating that he knows his next move but says revealing it would “cause chaos” ahead of the tournament. Reports on his pending retirement appear premature, but should this prove his swansong in the game, he will want to bow out in style.

Christian Eriksen: Key to Denmark’s success in 1992 was their team ethic, and that will form the blueprint to further success this time around. What will certainly help is that all three of their group games are in Copenhagen and on paper this would appear a straight battle with Russia for second spot.

It will be match round three by the time the two nations meet, so a clear picture of what is required will be known come June 21. Hjulmand has a strong spine, but he will rely on Eriksen for artistry in the No 10 position. The Inter Milan playmaker seems to reserve his best performances for his national team, scoring 36 goals in 106 appearances.

Romelu Lukaku: Is this the year for Belgium’s golden generation? A plethora of star-studded names fill Martinez’s squad, but with Eden Hazard having struggled for form and fitness at Real Madrid, it is likely to fall on Lukaku to hit the ground running in the group opener against Russia.

Kevin de Bruyne is facing a race against the clock to be passed fit after he fractured his eye socket and nose in the Champions League final. With the fixture made harder by it taking place in St Petersburg, Belgium will require a clear vision, and Lukaku has shown at Inter Milan and throughout his career that he is capable of winning games on his own.

Switzerland are unbeaten in their last five games at the European Championships (two wins followed by three draws); they had lost six of their first eight games in the tournament.

Teemu Pukki scored 10 goals in the Euro 2020 qualifiers, that’s eight more than any other Finnish player (Fredrik Jensen, 2 goals). This tally is the most ever scored by a Finnish player in a single qualification campaign for a major tournament (World Cup + European Championships)

Belgium are one of only two European teams (alongside France) to have reached the quarter-finals of each of the last three major tournaments (World Cup + European Championships, reaching the last 8 at World Cup 2014, Euro 2016, World Cup 2018).

Denmark hope having thousands of passionate fans back in the stands in Copenhagen on Saturday will help them to victory over a Finnish side making a first appearance at a major tournament finals.

On Thursday, Denmark’s government approved having up to 25,000 fans at Saturday’s Group B clash, but the football association said it would not be able to change capacity ahead of the Finland game, when around 16,000 are expected to attend.

Regardless of numbers, coach Kasper Hjulmand expects the fans – known in Danish as “roligans” in a play on the word hooligan but meaning calm and fun – to help his side maximise the advantage of playing their three group games at home.

“That boost and the margins that all these matches will be about, I believe the Danish fans in Parken (stadium) can tip the balance in our favour. They are the ones who help us when we really need it, the ones who cheer when we put in a tackle and score a goal,” Hjulmand told reporters.

What are the other home nations up to?

England are undergoing their final preparations ahead of facing Croatia at Wembley in their opening Group D fixture.

Meanwhile, Scotland will continue their build-up to their opening game of the tournament which is on Monday against Czech Republic.

And finally… How Finalnd made history under Kanerva… 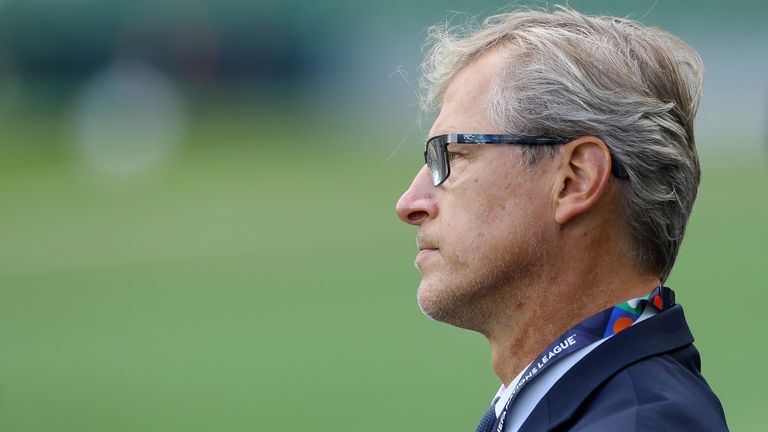 In an exclusive interview with Sky Sports ahead of Euro 2020, Finland coach Markku Kanerva discussed his rise from schoolteacher to taking his country to their first-ever major tournament.

Sky Sports Football Euros Podcast: Gary Neville on England’s chances, why France are favourites, and how Euro 2020 can lift the nation

Sky Sports pundit Gary Neville (5:07) joins Peter Smith on the Sky Sports Football Euros Podcast to build up to the big Euro 2020 kick-off. Neville has his say on England’s strengths and weaknesses, what they’ll need to do to beat favourites France to the title, and how this talented young group of England players can raise the spirits of the entire nation.

During the podcast, we also get the lowdown on how Scotland and Wales (22.54) are shaping up from the Sky Sports News reporters following their campaigns, Charles Paterson and Geraint Hughes. Plus Valentina Fass from Sky Italy and Uli Kohler from Sky Germany (56.39) give us the view from the continent on how their own nations are looking.

Sky Sports deputy football editor Kate Burlaga and football writer Ben Grounds will also be sharing their top tips for the tournament, including who will be lifting the trophy on July 11 – and which players will light up the tournament (1.09:35).