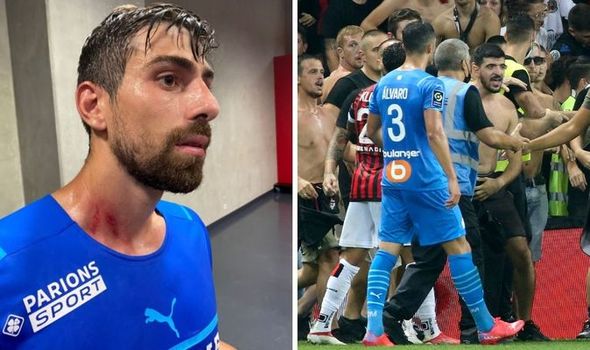 The pitch invasion from some angry Nice fans on Sunday night has left three Marseille players injured, according to reports. Nice held a slender lead over rivals Marseille heading into the closing stages of the match.

But the game desceneded into chaos in the 75th minute when some Nice fans overstepped the mark.

Video footage showed Dimitri Payet being struck in the back hard by a bottle from the crowd.

He went down in some pain before jumping back up in anger, reportedly launching it back into the angry crowd.

Soon, dozens of the Nice supporters raced down to pitchside to try and confront the Marseille star.

Players from both sets of teams soon moved to where the commotion was and there was a mix of those trying to calm the situation down and some who didn’t.

Security inside the stadium struggled to hold back the Nice supporters who soon broke through the barrier to approach the players.

Nice captain Dante was spotted trying to get the supporters off the pitch and back into the stands.

But there were still some who were getting up close to the Marseille players and it appears as though some have been injured in the process.

According to RMC Sport, Payet was left ‘shocked’ after being hit by the bottle.

And both Luan Peres and Matteo Guendouzi have been pictured sporting some rough marks on their necks.

It took several minutes before all the players had left the pitch and returned to the changing rooms.

The match was officially suspended and Marseille president Pablo Longoria made it clear in the tunnel that he didn’t want his players to return to the pitch.

“We are not played,” Longoria was reported to have said repeatedly.

Nice players had returned to the tunnel more than 45 minutes after the match was suspended in anticipation of the game being restarted.