A horrified John Hutchinson was watching America tear itself apart when he sent the email that changed his life.

As the coronavirus deaths tallied up and the streets heaved with violence and anger last year, Hutchinson was ready to quit his job as an assistant coach at Major League Soccer’s Seattle Sounders and retreat with his family to the relative safety of Australia. 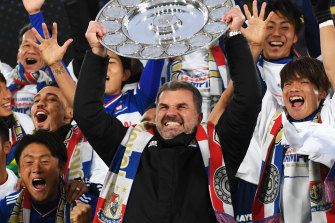 Ange Postecoglou raises the 2019 J-League trophy in triumph in Yokohama.Credit:Getty

But first, he needed external affirmation. So he turned to an obvious yet unlikely source: Ange Postecoglou, another Aussie coach stranded overseas mid-pandemic.

It was a little out of the blue. Hutchinson had only ever met Postecoglou once before – aside, of course, from all the times he’d shaken his hand post-match after Brisbane Roar or Melbourne Victory had given his Central Coast Mariners the runaround in the A-League. But he knew enough to know it was worth a shot.

“It was a strange one,” he said. “But I always saw that he gave Australian coaches time. People who knew him told me about how much of a great man he was and always helping Aussie coaches out.

“I just sent him an email and said ‘look, I just need some help, I’m struggling in Seattle with my family,’ and America at the time was going through some problems of its own. I actually didn’t know what to do, the job was really difficult at that stage. 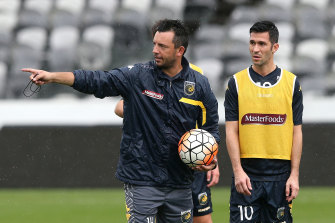 “He replied that night. I got this nice long email back from him … he was super busy in the middle of his season and here he is replying to me, telling me to hang in there and stay overseas and giving me this kind of inspiration through email.”

It wasn’t that particular exchange that changed Hutchinson’s life, but it got the ball rolling. Postecoglou’s follow-up message came a few months later, asking if he’d be interested in joining him as his lead assistant coach at Yokohama F. Marinos.

“I would have left the next day if I could have,” he said. “It was a whirlwind – 50 minutes on the phone, then I walked into the loungeroom and told my wife, ‘I think we’re going to move to Japan.’

“There was no way I was turning it down.”

To be honest, that was my PhD in football.

Hutchinson, 41, is still stuck in Melbourne, with Japan’s current state of emergency blocking him and other foreigners from entering the country for now. But he’s been working remotely for nearly two months – formulating and analysing pre-season training sessions via Zoom, text messages and phone calls – and is fully aware of how fortunate he is to be doing even that.

He is merely the latest in a long line of coaches to have worked under Postecoglou, whose unofficial internship program is not only changing the way football is played in Australia, but how Australian football is perceived abroad.

Hutchinson joins Shaun Ontong, another young and up-and-coming Australian coach, on staff at Yokohama F. Marinos, who were due to kick off their J.League season on Friday night against champions Kawasaki Frontale. It’s Postecoglou’s fourth year in Japan, and surely one of his last before the seemingly inevitable move to a big European club.

Before Hutchinson and Ontong came Peter Cklamovski and Arthur Papas, who were each able to parlay their experiences with Postecoglou – arguably the most successful coach Australia has produced in any code, in history – into their own head-coaching opportunities.

And before them came a generation of others at the Socceroos, Melbourne Victory, Brisbane Roar and South Melbourne – including Ante Milicic, Kevin Muscat, Rado Vidosic, Ken Stead and Mikey Petersen – who have all furthered Postecoglou’s mission and commitment to aggressive, attacking football in their own ways.

Getting the tap on the shoulder from Postecoglou is the closest thing in Australian coaching to receiving a letter from Hogwarts. Fittingly, it also tends to come out of the blue, and shifts the course of the recipient’s career in an instant.

“To be honest, that was my PhD in football,” Milicic said.

Like Hutchinson, Milicic had no real personal relationship with Postecoglou when he was offered the chance to join the Socceroos as an assistant before the 2014 World Cup. He is now the coach of A-League newcomers Macarthur FC.

“What I got out of it was so much more than just coaching and being around football teams. It’s a real holistic approach to being a modern-day football coach with a clear philosophy and identity,” he said. 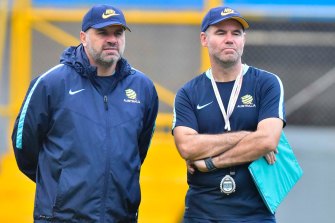 Ange Postecoglou and Ante Milicic watch the Socceroos train in Honduras in 2017.Credit:AP

“You don’t last with Ange unless you are continuously, every single day, wanting to learn, wanting to get better, [meeting his] high standards. When he asks you something, you want to have the right answers.

“It’s not just football – the logistics, the travel, the meeting times, the video, players in off-season, how they’re thinking, how they’re feeling, body language, injury replacements, meal times, recovery. So much detail goes into it.

“By going through all that, that’s what gives you your confidence as a coach moving forward, because you know that he’s prepared you to a level that no one else can get you to.”

Ontong was Postecoglou’s captain during his time in charge of the Young Socceroos, and decided to channel his energy into coaching when injuries curtailed his A-League ambitions at age 23. 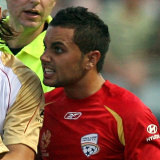 Shaun Ontong’s playing career was cut short by injury, but the former Newcastle and Adelaide midfielder is channeling his energy into coaching.Credit:Getty

In late 2019, thanks to his previous relationship with Postecoglou and Papas – a former colleague and close friend – he was granted the opportunity to watch Yokohama operate at close quarters on a brief visit.

Some weeks later, when Cklamovski told Postecoglou he was leaving to coach Shimizu S-Pulse, a permanent gig opened up.

“Ange gave me a call, and I mean … before the call even ended, I didn’t have to say no more, talk about anything more,” Ontong said.

“I know what it was like as a player, playing under him. Then transitioning into coaching … if it meant I’d be picking up his cones for a year, that was good enough for me. I dropped everything and was literally out the door.”

Ontong said no single person had a bigger influence on his career than Postecoglou, whose dogged belief in Australian football’s ability to match the world’s top nations is legendary and pervasive.

“It’s very hard to explain – I’ve tried to work that out myself about what it is that is so powerful about him and his messages,” Ontong said.

“The one thing I know is that it’s completely authentic. It is real. The things he believes in and how he wants to play, he truly believes it, and it wears off on everyone around him, including the players and all the staff.

“There’s not a day that goes by that I take my situation at the moment for granted. I really don’t, because he could work with anyone. I am exactly where I need to be right now. How can you take that for granted?”

Cklamovski spent the better part of 16 years working by Postecoglou’s side, and while his first stint on his own didn’t work out, he remains one of Australia’s most promising tacticians and is on the radar of A-League clubs. 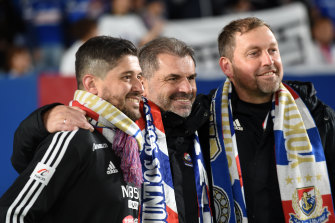 “From early doors I kind of fell in love with his football. It just resonated with me, ignited a flame within me,” Cklamovski told the Herald last year.

“He’s a serial winner, mate. There’s an obsession that goes with that that I admire and I also learnt from that. We’re both different people in a sense but have similarities in mindset and that’s probably the connection, and it’s a powerful connection too.”

Papas is certain he wouldn’t be about to take charge of third-tier Japanese outfit Kagoshima United if his two years under Postecoglou hadn’t opened that door for him. As he told The Asian Game podcast, Postecoglou shares his own powerful blueprint for success with his proteges, but also helps them construct their own.

“The most important thing is to be yourself,” Papas said.

“Ange is Ange, and no one [else] can be Ange. You’ve got to be yourself. We share very similar ideas on how football can be played, and then we have our own unique identity, which is important that you don’t lose along the way.”

Postecoglou encountered plenty of roadblocks in his coaching journey. The reason he keeps bringing young Australians into his inner circle, as he once explained, is to help them confront those same barriers. They benefit individually but, as they advance their own careers, the game also benefits collectively.

This year, it’s Hutchinson’s turn. He admitted he had been in a “hurry” to find his own head coaching position somewhere in the world. Now he’s in no rush at all.

“It’s an education in everything,” Hutchinson said.

“If you look at the coaches that have gone on after working with him, it speaks for itself. There’s head coaches everywhere now, and the boss has to be rewarded for what he does in grabbing Australian coaches from anywhere and trying to give them a career.

“That’s where I feel lucky. For me it’s unbelievable.”