The ULTIMATE Invincibles! 26 games, 26 wins and 128 goals… after claiming the Spanish title with ease, Barcelona Women have Chelsea in their sights as they look to win their first Champions League trophy tonight

As Chelsea lifted the Women’s Super League trophy at Kingsmeadow last Sunday, their Champions League final opponents were celebrating in a rather different setting.

Basking in the Catalonian sunshine, Barcelona’s players and staff headed straight to the beach for a pool party after winning a record sixth Spanish title.

Their 1-0 victory over Granadilla Tenerife coupled with Levante’s 1-1 draw with Espanyol meant Barca were crowned champions with eight games to spare. But the competition in Spain has been non-existent. 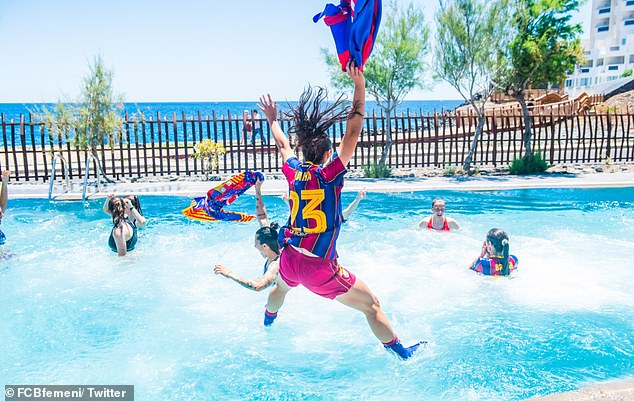 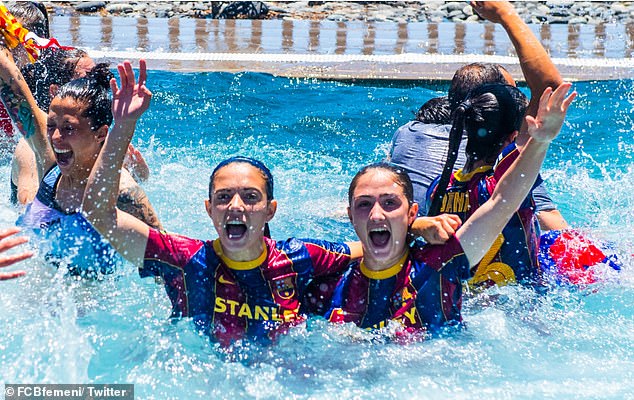 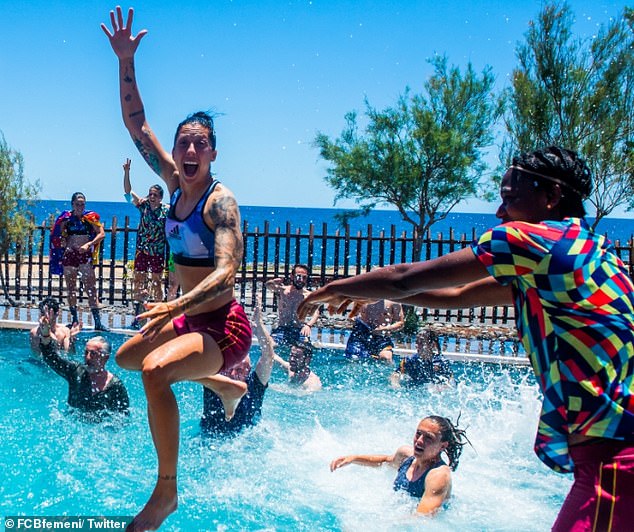 They have won all 26 of their league games, scoring 128 goals and conceding just five

Lluis Cortes’ side have won all of their 26 games, scored 128 goals and have conceded just five. They are 16 points clear of second place Levante, who they beat 7-1 in April, and also have three games in hand. Chelsea were only defeated once in the WSL this season but finished just two points ahead of Manchester City.

On Sunday, one of Barca and Chelsea will win the Champions League for the first time. Both clubs have emerged as powerful forces in the women’s game in the last five years, but their journeys have been distinctly different.

While Chelsea paid a record transfer fee for Pernille Harder last summer, Barca did not make a single signing. The Catalans are keen to emphasise their philosophy of building a first team full of academy graduates and have age groups all the way down to U11s. They have been built in the image of the men’s team and aim to replicate the ‘Barcelona DNA’ of a quick-tempo, through-the-lines passing game.

Markel Zubizarreta, son of former Barca and Spain goalkeeper Andoni, became the sporting director in 2017 and has overseen the development and growth of the team.

‘We wanted to do it in one specific way,’ Zubizarreta tells Sportsmail.

‘We didn’t want to sign the best players in the world, we wanted to take players from the academy and try to make them better every day with our way of thinking about the game. 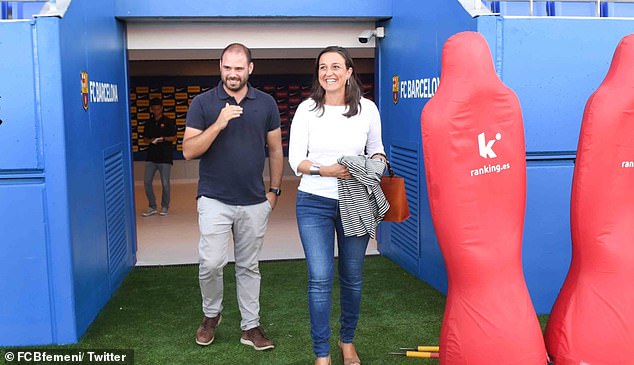 ‘In women’s football, we think our style of possession game is even more important because there are a lot of strong teams and physical teams so it’s important we can control the game with our way of playing. We think this is our best chance of winning trophies.’

Barca were finalists in 2019 but were beaten 4-1 by a dominant Lyon side. The Catalans feel they are ready and better prepared for this final.

‘When we lost the final we knew our weakness and how far we were from the goal of becoming champions of Europe,’ says Zubizarreta.

‘We saw the areas that we needed to improve more and that is what we have been doing in the last couple of years.

‘We have focused on our players and trying to make them better every day. This is what we have been doing with the help of the club and a bigger effort to reach our goal.’ 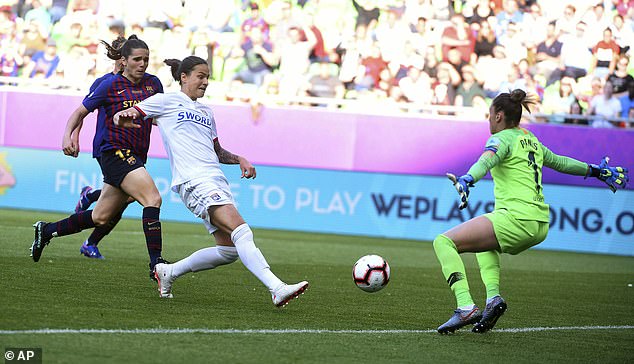 Barca did sign a star player in 2017 when they saw off competition from Europe’s top clubs to land Dutch international Lieke Martens.

The 28-year-old forward is thought to be the highest paid player at the club with an annual wage of around £172,000. It may not compare to Lionel Messi’s weekly wage of £500,000 but it is a respectable salary in the context of the women’s game. Even more so given players in the Spanish league went on strike in 2019 over pay conditions and lack of professional status.

All clubs now have to pay players a minimum wage and the league will finally become fully professional from next season.

‘Everyone is investing a lot more now and it’s really nice to see because I think we deserve it,’ says Martens.

‘We’re always on the pitch, working our a** off and I can only see in the future it getting better and better.’ 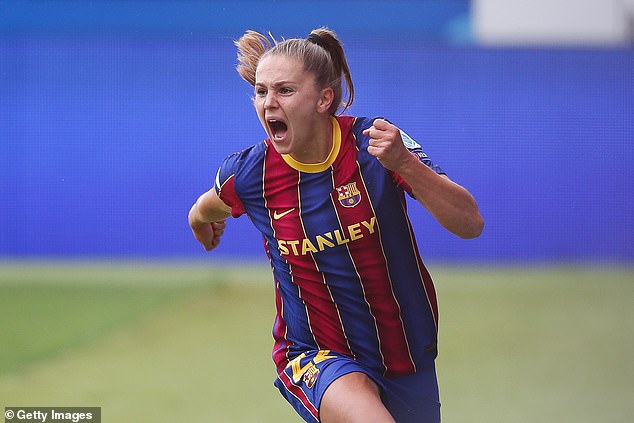 Martens was part of the squad that lost the 2019 final and believes Barca’s experience from that defeat can give them the edge over the Blues.

‘It really feels like this is our moment and it can be our year. The experience we have from the final against Lyon two years ago has helped us.

‘I remember after 50 minutes it was already 3-0. It was a really good experience for the team, we were a bit scared in the beginning and Lyon took over. We have learned a lot from there.

‘We know that Chelsea is a counter-attacking team so we’ve prepared for that. Maybe they will give us the ball, we will see. We’ve played many games in the league like this where we’ve dominated the ball. We want to keep the ball and create chances. Possession is the key.

‘Of course the league has been quite easy this year. We knew with the games in the Champions League we’d have to lift our level more and be at our best to beat Chelsea. Now it’s a new opportunity. I don’t want a silver medal, I want a gold one.’

This season’s standings in Spain show there is a clear gap between the best and the rest. It is not too different a story in England but there has at least been more competition between the clubs in the top five places.

Zubizarreta, though, does not believe Barca’s dominance means the Spanish league is weaker. 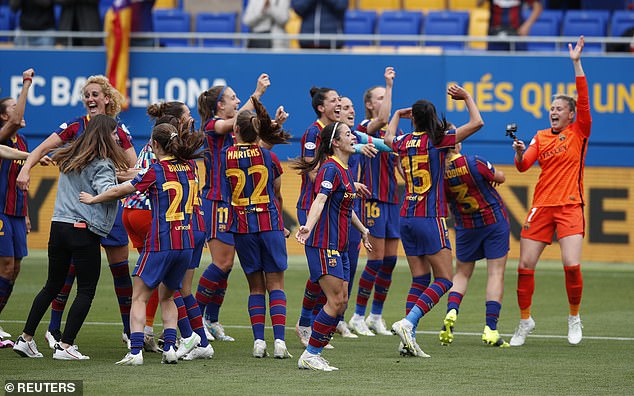 ‘Atletico Madrid are seventh in the Spanish league, they had a lot of chances to beat Chelsea (in the last 16) so I think that the level we have in Spain is not very far off (the WSL), or maybe there is no difference with the Spanish league in that sense.

‘It is not normal that we have won all the games. This shows the level we have reached this season. What is the big difference is the number of games. We have 18 teams in the league, this means that we have to play 34 games every season, in the WSL it is just 12 teams. We have been playing twice a week since January and have played more than any team in Europe right now.

‘We have a team that is really well prepared. We have a team where we don’t have 11 starters, we have 23 players that can play in the final of the Champions League. When you see our team training every day, you can imagine the levels we reach and this is something that makes the difference for us against the teams we face

‘We are training more than ever before, we are doing things that we could not do in the past and are reaching that level and finally against teams like Manchester City, Paris Saint-Germain or in the final against Chelsea, we don’t feel that we are less than them.’