The thought wouldn’t have crossed Ralph Hasenhüttl’s mind for a moment. But with one swift decision at St Mary’s Stadium, the Southampton manager instantly doubled Australia’s representation in the English Premier League.

When teenager Caleb Watts was sent onto the field in the 74th minute as a substitute for Theo Walcott, he became just the second Aussie to have played in the EPL this season. 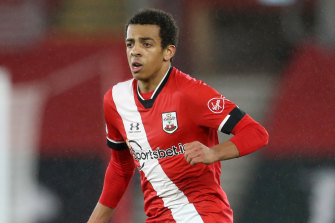 Caleb Watts made his EPL debut for Southampton on Wednesday morning against Arsenal.Credit:Getty

The other, Socceroos goalkeeper Mat Ryan, watched on from the Arsenal bench, an unused substitute.

Southampton were already two goals down when Watts entered the fray, and while they lost 3-1, the 19-year-old acquitted himself well in just his second appearance at senior level for the club, having made his professional debut to rave reviews last week in a 2-0 FA Cup win over Shrewsbury Town.

Some excited Saints fans have compared him to Aston Villa captain Jack Grealish, and not just because of how he wears his socks.

Socceroos boss Graham Arnold was among Watts’ many well-wishers on Wednesday morning – as was the national under-17s manager and interim Football Australia technical director Trevor Morgan, who coached him at the FIFA U-17 World Cup in 2019.

“He’s quite happy and quite humble. He said, ‘I’m hoping I get one or two more opportunities before the season’s over.’ It makes it clear for him that there’s a possibility of playing at the top level,” Morgan said.

“He played every game for us at the World Cup, and that was coming off the back of an injury and he was still able to turnout some really top performances against teams like France, where he was scared of nobody. I like his character a lot.”

Watts is eligible to play for both Australia and England, where he was born and raised, but has committed to representing the Socceroos and looms as an outside chance to play at the Tokyo Olympics.

It was his Australian father – a doctor who moved to London for work many years ago – who put him on Football Australia’s radar when he switched from QPR’s academy to Southampton and flagged his status as a potential player of promise for the national team.

“Although his chances this year have come due to an injury patch at Southampton, that’s a very good squad with a very settled way of playing, and for that club to give him the opportunity shows that they’re very curious to see how he’ll go,” Morgan said.

It might be slim pickings for Aussies in the EPL at the moment, with Watts only just breaking through and Ryan yet to play for Arsenal since sealing his loan switch from Brighton and Hove Albion, where he played alongside Aaron Mooy until his shock move to China last season.

But there is plenty of reason to believe that those numbers could swell in the coming years a a glut of impressive young players emerge in the A-League and in the youth set-ups at overseas clubs.

The one closest to a breakthrough in England’s top flight is Tyrese Francois, the 20-year-old midfielder who was born in Sydney’s south-west but is closing in on a senior league debut for Fulham after being named as an unused substitute several times this season.

“I’ve visited him a couple of times over there. I’ve watched him play for Fulham – he’s a smart player, great technique, good midfielder,” Morgan said. “If he was playing here in the A-League everyone would be enjoying watching him play.”