Southampton: Saints manager Ralph Hasenhuettl slumped to the ground, pulled down the bill of his cap, and wept after another big win for his team in the English Premier League.

On the receiving end this time were Liverpool, who also appear to be on their knees in what is shaping up to be the most open title races in years. 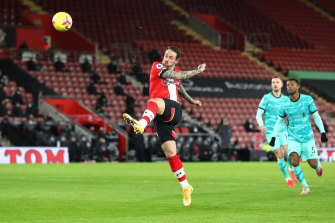 “When you see our guys fighting with everything they have, it makes me really proud,” the Austrian coach said. "You need to have the perfect game against Liverpool and I think we did have that.

“It was an intense game, my voice is nearly gone. The guys are tired, you have to be to win against such a team. The guys believed in what they were doing."

Few could have foreseen this sudden drop-off by Liverpool, who have failed to score in successive games for only the second time in Juergen Klopp’s five-year tenure.

Indeed, such has been Liverpool’s lack of cutting edge of late that Klopp’s team have managed just seven shots on target in the past three games. In the game before that, Liverpool beat Crystal Palace 7-0 away. 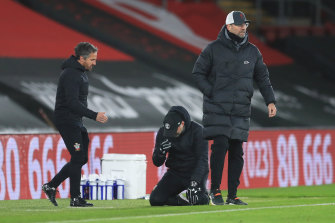 An emotional Southampton manager Ralph Hasenhuettl falls to his knees after the final whistle.Credit:Getty

“Our decision-making was just not good,” Klopp said. “That is how it is when you don’t have momentum. We should have had much more chances.”

But the Saints still had Ings, who latched onto a free kick by set-piece specialist James Ward-Prowse and lifted a bouncing ball over goalkeeper Alisson and into the far corner.

“We all know how good Prowsey is on set-pieces, and all the parts came together and luckily I got the goal," said Ings, who had an injury-plagued spell at Liverpool from 2015-18. “We had a chat before the game to see if there was a moment where we could get in quickly and luckily it paid off.”

It was attack v defence from then on but Southampton held firm, with centre-backs Jack Stephens and Jan Bednarek, in particular, outstanding.

“You know exactly what you are going to get from them," Klopp said of Southampton. "You cannot be surprised but we looked surprised.

“At the beginning how we played, where we lost the balls, it’s not rocket science. We should have done much better. We played into their hands with the start.”