Scott Munn remembers the times when marquee players like Harry Kewell had to stand, shivering, in wheelie bins full of ice in lieu of a proper bath because Melbourne Heart's training facility was so rudimentary that it did not have such an amenity.

Munn was the first person employed by Melbourne Heart chairman Peter Sidwell when the club was formed to become the A-League's third expansion franchise in 2010.

The then CEO had to convince players, officials and executives to join the fledgling club – even though it had no offices, no training ground and no infrastructure. 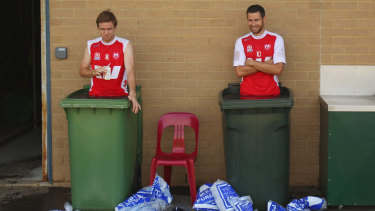 "The first two signings we made were John van 't Schip (coach) and John Didulica (then head of football operations and subsequently – until recently – the head of the players union PFA).

"We were operating out of Adriatic Furniture offices in Richmond," he says with a laugh.
(Adriatic furniture was the business of one of Heart's investors, Michael Catalano).

It was a world away from what Heart would become when it was bought by the City Football Group, the club now poised to land it's first A-League title if it can beat Sydney on Sunday.

"Looking back now it was an amazing time and those at the club will never forget but It certainly wasn't glamorous.

"We were based at Latrobe University from the start, but in a heavy winter it would flood and we had to find somewhere else (Epping) to train. It's a long way from then to now."

At the time he and his colleagues all felt that they would be expendable once the deal went through.

''I expected everyone would lose their jobs, me included. We were called into Crown, we were meeting Simon Pearce (City's vice chairman), Ferran Soriano (Manchester City's CEO) and Brian Marwood (now CFG's managing director, Global Football).

"We got up there, and they asked us one question each. 'What keeps you awake at night?'

"The financial controller, Paul Jeffery, said 'I've got no cash'. They said we will be put money in the bank tomorrow.

"JD said 'we have finished second last, we have sold all our best players.' They said no problems, we turn football clubs around, we will fix the list.

"Brad Rowse (now Melbourne City's CEO) said 'Westpac have just announced they are reducing their sponsorship and so we don't have a major sponsor.' 'They said, no problems, we think we can talk to Nike and Etihad.

"They then turned to me and I said 'if you can fix those problems I don't actually have any problems at all.'

The turnaround wasn't immediate, and there was some angst over the club's change of name and colours.

But ten years on, Munn is hoping City is now poised to win a first title and go on to be competitive in Asia.

"Our aspirations are to win trophies and play good football, but we are under no illusions, winning it every year is very difficult. We want to be competitive and always pushing for silverware."