Chelsea head coach Frank Lampard says people have “forgotten” how good Tammy Abraham was during the first half of last season and that the resurgent striker deserves more credit.

Having started the new campaign on the bench, Abraham has forced his way back into Lampard’s starting line-up and has scored in each of their last three games – victories over Sheffield United, Newcastle and Rennes, who Chelsea face once more in the Champions League on Tuesday.

Chelsea qualified for Europe’s top competition by finishing fourth in the Premier League last season, and Lampard believes a drop-off in the England striker’s form over the second half of the campaign caused many to forget the role Abraham played in the club’s success.

The 23-year-old scored 10 of his 15 Premier League goals last season in Chelsea’s opening 12 games, and often found himself on the bench with Olivier Giroud preferred up front following the restart in June.

The summer signing of Germany forward Timo Werner appeared to represent another obstacle in Abraham’s quest for first-team action, and when he was an unused substitute in Chelsea’s season opener against Brighton, his situation appeared bleak.

But Lampard believes Werner’s arrival may even have helped Abraham, saying: “The whole point of bringing in players like Timo is not only bringing in quality, but to lift others around him, by linking up on the pitch or by squad competition.

“I have more options in forward areas and I need good reactions. Tammy’s shown a brilliant reaction and he needs to be on that edge. All the young players need to be on edge daily to push themselves to try and play in this team.

“When they play like Tammy is at the moment, he starts making my decisions easier because he’s playing so well.

“Linking up with people like Timo will obviously help, but first and foremost, it always has to be about the player himself. Tammy should take credit for his start and understand that the next challenge is to remain consistent.” 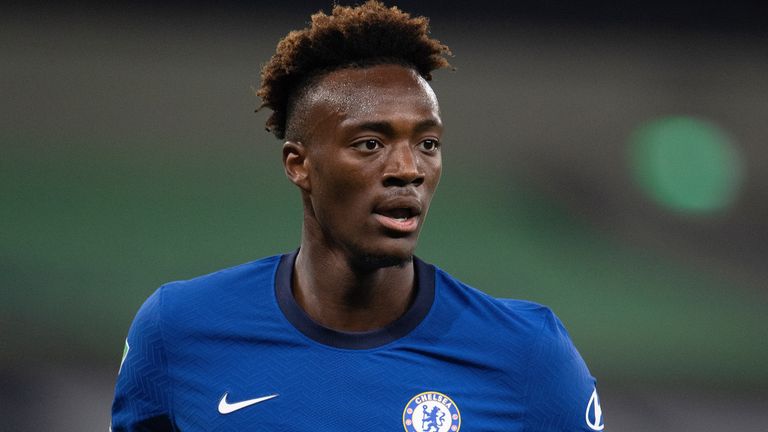 Despite Lampard acknowledging Abraham was not happy at starting the campaign as a substitute, the Chelsea boss insisted his forward maintained his professionalism throughout.

“With Tammy he hasn’t really come to see me,” Lampard said. “I’ve spoken to him regularly and sometimes you can see in his face, that they’re not happy.

“Particularly young players can’t hide it always, which is fine, because if he’s training well and he’s preparing well and he looks great and he doesn’t start, I understand why he would be frustrated, and he has been doing that.

“The flip of that is that they need to know that there’s competition at a club like Chelsea in forward areas… and it’s competitive. So everyone sort of has to take that one.” Chelsea could secure their place in the Champions League knockout stages with a win in France on Tuesday, and Lampard will be able to welcome back Thiago Silva and Kai Havertz after the duo missed Saturday’s win at Newcastle.

Winger Christian Pulisic will not travel to Rennes as he remains sidelined with a hamstring injury, but Lampard says the USA international should be available for Sunday’s clash with Premier League leaders Tottenham, live on Sky Sports Premier League.

“Pulisic is staying back, he doesn’t travel,” Lampard said. “But he’s had a good progression and will hopefully be fit for selection at the weekend and onwards.”