With an hour until kick-off at the VBS Community Stadium, the first travel-weary Harrogate supporters already tucked into a temporary away stand, Sutton United’s DJ loaded the inhouse CD player.

From his booth at the back of the main stand, he fired up the speakers dotted around this charming ground. His first song of choice? Mad World.

Could there be a more fitting soundtrack to this weekend of English football? How else to describe a Saturday where the EFL’s two newest members stand alone within the capital and its trimmings? 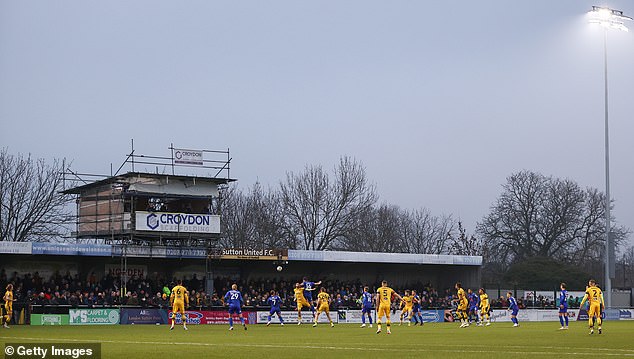 As Omicron rips through the country and games fall, this League Two clash was the final match left in Greater London. For now, normality reigns on Gander Green Lane. Well, almost.

Typically, supporters in this main stand would head downstairs, past the toilet twinned with a latrine in Malawi, and into the players’ bar. There they would mingle with Matt Gray’s side. It is those ties that bind this place together.

‘It’s such a great community club,’ says Gray. ‘I really encourage, in normal times, my players to go in and mix with the supporters, the ones who have paid to come and watch us, all as one club.’

Not today, though. And not for the foreseeable future as Sutton eye protection from the spectre of another shutdown.

‘It’s a great shame,’ said chairman Bruce Elliott. ‘But if it means we can continue playing football, then it’s a small price to pay.’ 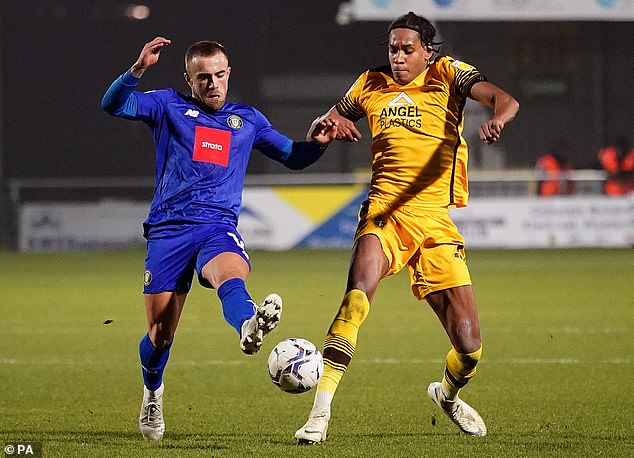 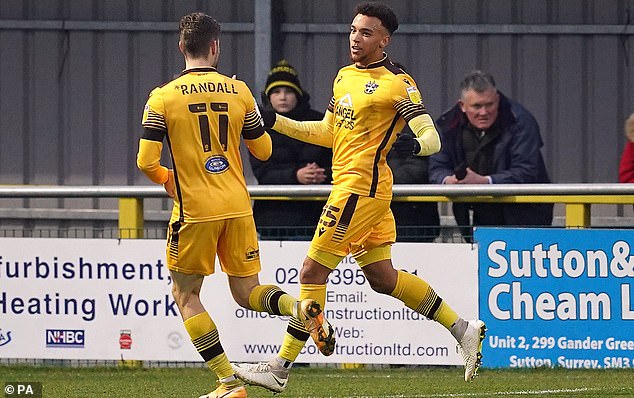 The stakes are that high. This 1-0 win, sealed courtesy of Donovan Wilson’s goal, took Sutton up to third – heady heights for a side who had spent their previous 123 years in non-League football.

Off the pitch, however, the health of English football’s pyramid is under threat once more. Red zones have been re-established; fans are asked to test for Covid before arrival.

From next week, players will at least have daily screening courtesy of the EFL. Until now, a nationwide shortage of tests has left clubs such as Sutton scrambling to manage possible outbreaks. In September, their trip to Colchester was called off after several cases among Gray’s squad.

The army of volunteers who prop up this place are not immune either. Kit man Clive Baxter, now in his seventies, joined Sutton as tea boy in 1961. He has been one of the unlucky few to catch Covid. Before this season Baxter had only missed five matches in six decades. 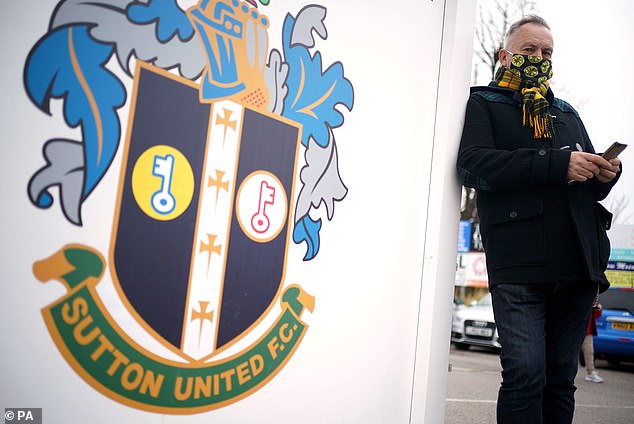 But no one here, or across the lower leagues, can afford many more free weekends.

Though clubs in the top-flight, where broadcast money is king, may want a festive firebreak, that would be catastrophic further down the leagues, where matchday income is a pillar of survival.

‘That is absolutely vital to us,’ says Elliot. ‘You might get away with a week or few weeks. But if it goes for a month, six weeks, two months, then I’m sure every club in the country will be struggling.’

That is only one reason why getting this game on was so critical. Sutton was already in mourning after four children died following a house fire just yards from the ground. 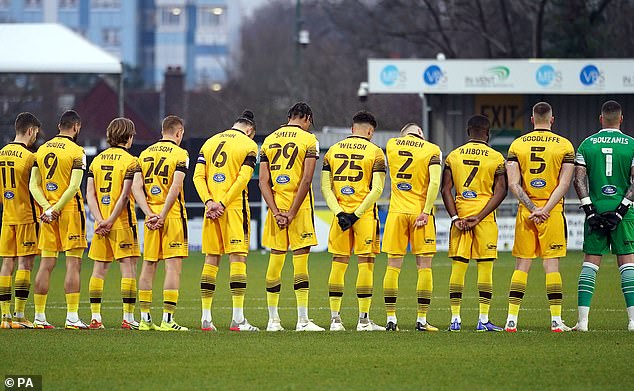 Offering locals fresh air and light relief was part of United doing their bit. The community responded, with 2,720 packed into the terraces, slightly more than normal. That included 90 veterans of the 230-mile journey from Harrogate.

This is Sutton’s first ever season in the Football League. For Harrogate it is campaign No2. Unfortunately uncharted territory brought unintended consequences.

Both sides were required to rip up artificial pitches; Sutton had to upgrade their floodlights and turnstiles too, while an improved away stand is still under construction. The result? Almost all of the £1million they earned for reaching League Two has been accounted for already.

‘The list is fairly endless as to the other work that’s had to be done here to conform to EFL requirements. And we’re not finished yet,’ says Elliott. ‘Off the pitch it’s been very difficult financially, there’s no question.’ 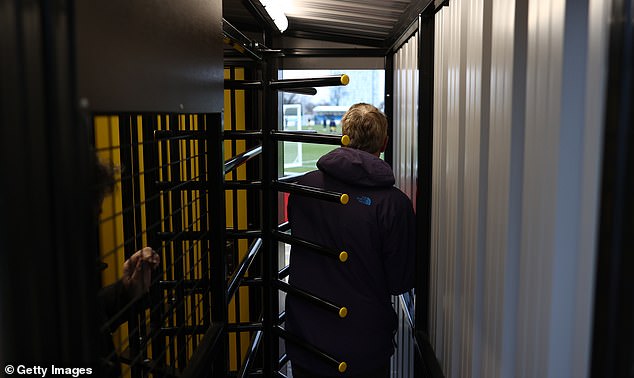 It could soon be even tougher. They had one of the smallest budgets in the National League before promotion. Their 3G pitch brought in about £200,000 a year.

Sutton survived the first lockdown thanks to loans, grants and £50,000-plus of supporter fundraising. There is no contingency pot for a second. Should football shut down, ‘it wouldn’t be very long’ before paying players would require outside help.

All of which only highlights the brilliance of Gray’s side on the pitch.

Supporters already missed most of their finest ever league campaign, surely they cannot be starved of a second unlikely promotion push?

Maybe keeping a social distance from the bar might be worth their while.