United went close to taking the lead when Paul Pogba’s looping header from a Bruno Fernandes free kick hit the top of the bar, before Anthony Martial’s effort from close range was cleared off the line by Mohammed Salisu. Pogba then had a free header from Luke Shaw’s delivery but could not keep the effort down.

Southampton took the lead in the 30th minute when Jack Stephens stripped Fernandes of possession and Che Adams’ shot took a wicked deflection off Fred and beat David De Gea. Their advantage did not last long following the restart, however, as Mason Greenwood scored his second goal of the season when he fired a shot under Alex McCarthy following a touch from Pogba.

Southampton striker Adam Armstrong missed a golden opportunity to give his side the lead but was denied by a big stop from De Gea, as the hosts finished the match on top.

Here are five things we learned.

Manchester United equalled Arsenal’s top-flight record of 27 games unbeaten away from home as they came from a goal down to take a point – but this is not a draw that Ole Gunnar Solskjaer’s side will be celebrating.

Last season, United went the whole Premier League campaign unbeaten from home with many of those matches featuring slow starts and second-half comebacks, most notably on their last visit to St Mary’s when they won 3-2 after being two goals down at half-time.

With the return of full stadiums and home advantage, Solskjaer warned before United’s first away match of the season that they could not afford to keep falling behind on their travels, and yet this performance contained all of the hallmarks of the inconsistencies of the last campaign. 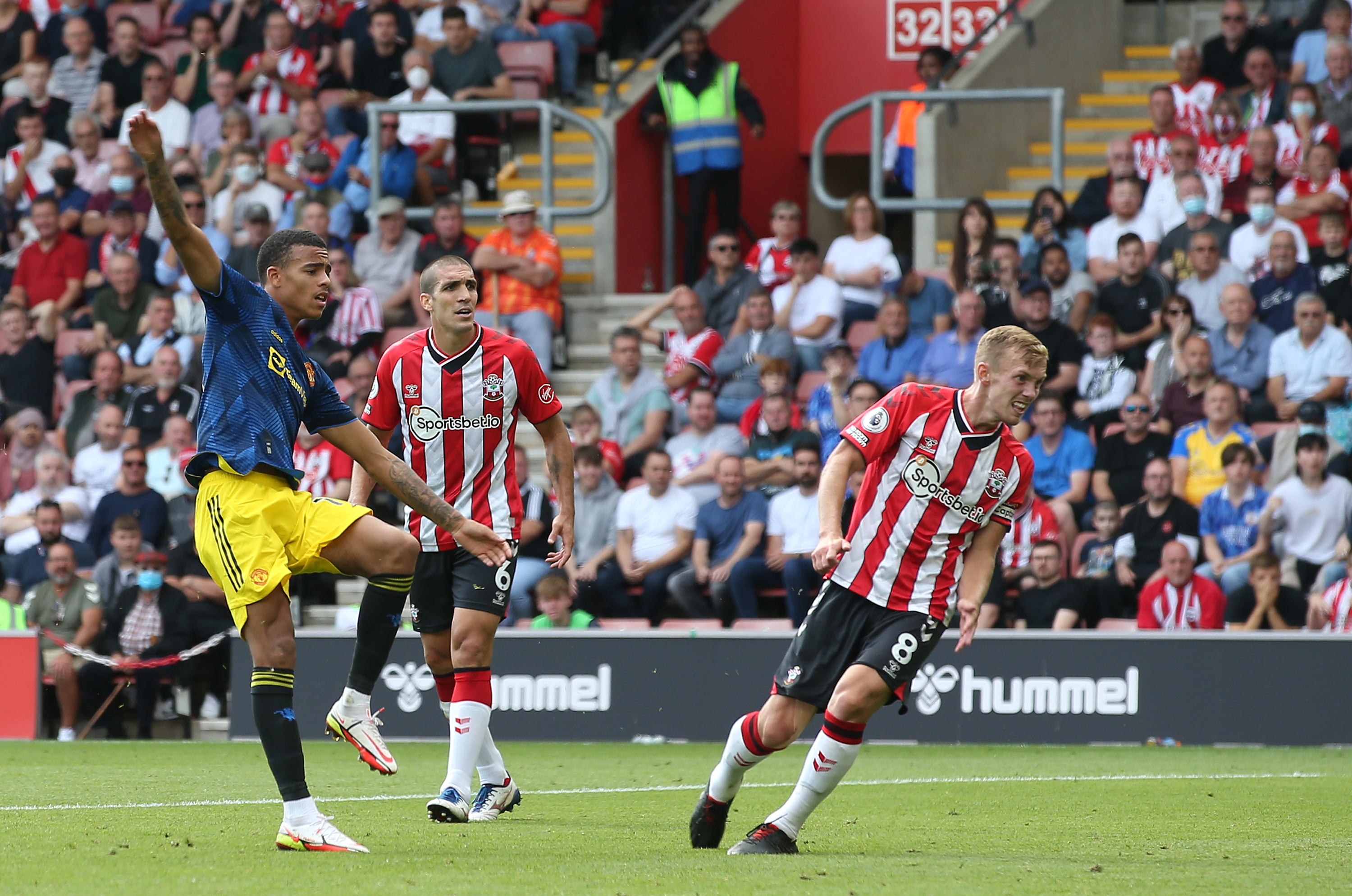 In both halves at St Mary’s, United’s performance levels lifted and dipped in a matter of moments. They were punished for some of their sloppiness in the opening period but when Greenwood fired in United’s equaliser, Solskjaer’s side had drastically improved and looked certain to score a winner.

Loose passes and classlessness creeped into United’s game once again, however, and they found themselves under pressure as the home crowd roared on the Saints. United had plenty of warnings last season that they cannot afford to keep having slow starts, and this was a further wake up call.

They may have lost a half-time lead for the second week in a row, but there were plenty of encouraging signs from Southampton in securing their 1-1 draw against United.

The performances of Mohamed Salisu and Valentino Livramento will boost the confidence of a new-look backline, and the way Southampton resisted the pressure from United before growing back into the game themselves is a sign that Ralph Hasenhuttl’s side still retain plenty of belief and fight despite losing a couple of key first team players this summer.

Salisu, in particular, made several vital blocks and challenges and his outstanding display came at a good time following the departure of Jannik Vestergaard to Leicester City.

After captain James Ward-Prowse signed a new long-term contract at the club, the mood around Southampton has now shifted significantly following the disappointing 3-1 defeat to Everton last weekend.

3. Martial fails to grasp his opportunity

With Jadon Sancho not yet ready to start his first match for United, Anthony Martial had the opportunity to stake his claim as Solskjaer’s first-choice number 9 as he was handed a surprise start at St Mary’s.

Mason Greenwood was moved to United’s right – the position that will be filled by Sancho when he is fully fit – with Martial coming in from the start in one of two changes from the opening win over Leeds.

It was an opportunity that the Frenchman failed to grasp, however, as his struggles from last season continued. Martial was close to being anonymous in the first half and only David De Gea had fewer touches than the striker.

Southampton defender Stephens was quicker to the ball than Martial on a couple of occasions and he was not ruthless enough when he did have an opening. With Greenwood out on the right, it meant United were also missing the 19-year-old’s threat from central positions, after his impressive performance in the 5-1 win over Leeds.

Greenwood showed what United were missing when he scored United’s equaliser shortly after half-time, with the forward drifting in from the right to be in the right place at the right time to dispatch a loose ball. And when Sancho was brought on for his second Premier League appearance moments later, it was no surprise to see Martial’s number raised, on what was a disappointing afternoon for the 25-year-old.

When Jack Stephens stepped across Bruno Fernandes to win the ball back high up the pitch, the Manchester United midfielder was appealing for a free kick before he hit the ground. 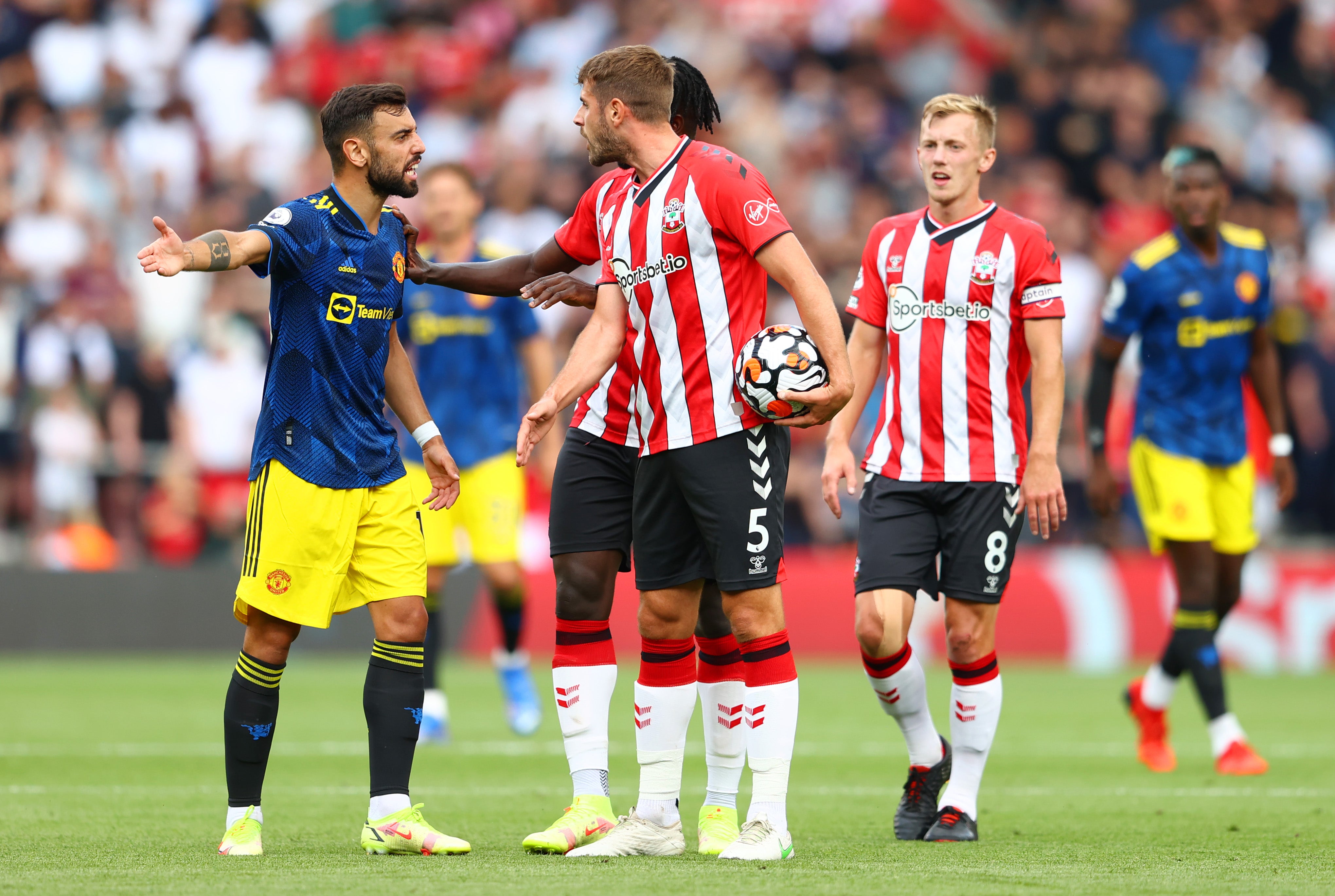 Bruno Fernandes was left frustrated by the decision

There was still plenty for Southampton to do as they worked the ball into Adams and the striker’s shot deflected off Fred and into the net, but United were furious that a foul had not been awarded for the earlier challenge.

Fernandes was booked for his protest of the decision, which also seemed to split opinion on social media, but it was a reflection of the fact that the bar has been raised by referees in an attempt to cut down on soft free kicks. It was also an incident that last season could have resulted in a lengthy VAR review, but with the bar being raised for that too, it was refreshing to see referee Craig Pawson’s original decision stand without the need for any intervention.

It certainly wasn’t an officiating error and while United fans may not agree, it wasn’t a foul either. It may be the case that some players, such as Fernandes here, will eventually adjust to the new guidelines.

When United found themselves 1-0 down following Fred’s own goal, the frustration was compounded due to the fact that Solskjaer’s side had allowed a promising period of possession to pass without taking the lead.

Two presentable chances came and went in the opening 15 minutes, both from wide free kicks, in which United players got to the ball first but couldn’t convert. First, Fernandes’ cross from the right was missed by Victor Lindelof, who had a free header, before Pogba got a poor connection on his header as it looped up into the air and hit the crossbar. Martial wasn’t clinical enough on the rebound as Salisu cleared off the line.

Pogba was again the target when Luke Shaw’s cross from the left found the midfielder in space in the box. United again failed to capitalise on slack Southampton marking as Pogba headed over the bar without testing Alex McCarthy.

It felt like a goal was coming, but United’s creativity from open play was lacking and soon sloppiness creeped into their game. Converting either of those set-piece opportunities would have allowed United to settle down and in tight away matches, you cannot afford to pass up chances such as those – especially when the delivery from wide areas is of such a high quality.