Southampton have a doubt over Jan Bednarek while Fulham could have Harrison Reed return; watch Southampton vs Fulham live on Sky Sports Premier League and Main Event from 2.45pm on Saturday – kick-off 3pm 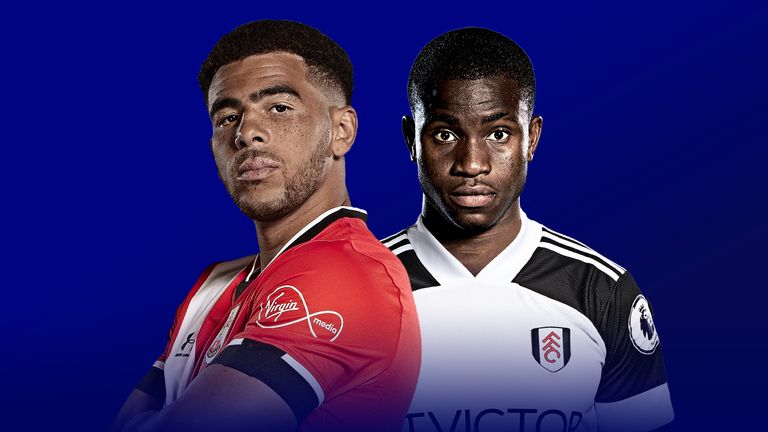 Team news, stats and prediction ahead of Southampton vs Fulham in the Premier League on Saturday, live on Sky Sports (kick-off 3pm).

Southampton have a doubt over defender Jan Bednarek for their Premier League clash with Fulham.

The Poland centre-back was forced off at half-time of Tuesday’s victory over Crystal Palace after taking a kick to the ankle and has not trained since.

Ryan Bertrand, who it was confirmed this week will leave the club at the end of the season, remains sidelined with a calf injury, along with Oriol Romeu (ankle) and Will Smallbone (knee).

Fulham could have midfielder Harrison Reed return for the trip to face his former club on the south coast.

Reed has been back in full training this week after suffering an ankle injury which has kept him out of the side since April.

Scott Parker has no new injury concerns to deal with, with Tom Cairney still not having a return date fixed and Terence Kongolo already ruled out for the season.

Southampton vs Fulham will be shown live on Sky Sports Premier League and Main Event from 2.45pm; kick-off 3pm. Sky Sports customers can watch in-game clips in the live match blog on the Sky Sports website and app. Highlights will also be published on the Sky Sports digital platforms and the Sky Sports Football YouTube channel shortly after the final whistle.

Strap on those punting boots. Southampton are a fine bet here to take all three points.

The table officially has Saints 13 points better than Fulham but the gap between them is larger than that when you analyse the key metrics and reliability of players in key moments. Ralph Hasenhuttl, who should be the front-runner for the Spurs job, has a fine record at beating teams towards the bottom of the league with his up-tempo style. Eight of Southampton’s 11 Premier League wins this season have come against teams in the bottom eight.

Fulham will be here for the taking.

Scott Parker, who has been linked with the Spurs job, has overseen six defeats in their last seven and their relegation was confirmed in another limp display against Burnley. Parker spoke of some “big decisions” being made over the next month or two and it has to be a worry that motivation within his squad will be low for the remaining games, especially with the amount of loan players in his team.

When Saints win, Danny Ings usually scores. No player to have scored more than 20 goals in the last two seasons – he has scored 34 – in the Premier League has a more deadly conversion rate than the Southampton striker – a whopping 32.08 per cent. To put that into context, Harry Kane is working at a 24 per cent rate. Ings has a point to prove ahead of Gareth Southgate’s Euro 2020 squad announcement and must be backed this weekend to score in a home win.

BETTING ANGLE: Danny Ings to score and Southampton to win (13/5 with Sky Bet)

In a special episode of the Pitch to Post Preview Podcast we look ahead to this Saturday’s FA Cup Final at Wembley, where Chelsea and Leicester will battle for the trophy in front of over 20,000 fans.

Peter Smith is joined by Sky Sports News reporter Paul Gilmour and Sky Sports football writer Ron Walker to assess both sides on the back of their midweek results, the key areas which will decide the contest, and how the game will play out.

They also discuss what impact FA Cup glory would have on Brendan Rodgers’ managerial career, the importance of Jonny Evans at the heart of the Leicester defence, and why former Foxes midfielder N’Golo Kante could be the decisive player on the pitch this weekend for Chelsea.