Facebook has banned the sharing or viewing of our news articles on its platform. For independent journalism straight from the source, download our app and sign up to our newsletters.

The Socceroos’ dreams of facing global soccer superpowers Argentina and Brazil in the Copa America have been devastated by the coronavirus pandemic for the second year in a row.

Football Australia has scratched the national team from the South American championships, to which they had been invited as a guest competitor. 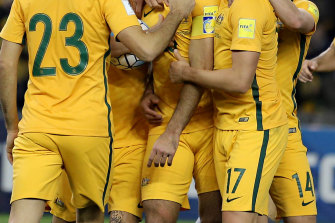 The Socceroos will not be heading to the delayed Copa America tournament this year.Credit:Paul Rovere

Changes to the 2022 World Cup qualifying campaign – forced on the Asian Football Confederation by the havoc wrought by COVID-19 – means that Australia will be playing three of the last four qualifiers for Qatar 2022 in June, when the Copa America is due to be held.

“It is with great disappointment that Australia cannot feature at the Copa America in 2021. The international football calendar, including our FIFA World Cup Qatar 2022 qualification schedule, has been significantly disrupted over the past 12 months by the COVID-19 pandemic,” said FA chief executive James Johnson in a statement on Wednesday morning.

“To have participated in such a prestigious competition and to experience the unique South American football culture would have been a thrill for Australian players, staff and fans alike … we remain hopeful for an opportunity to participate in future editions of the competition.”

The Copa was originally due to be held in 2020, and Socceroos and Olyroos boss Graham Arnold was looking to use the tournament as a lead-up to the Tokyo Olympics tournament, for which Australia have qualified for the first time since 2018.

Arnold was realistic about the slim chances of taking part this year, but nonetheless was disappointed when the final decision to withdraw had to be taken.

“The Socceroos’ players and staff were greatly looking forward to the unique opportunity of playing in the Copa America … which would have presented our team with a fantastic opportunity to test itself against some of the world’s best.”

Qatar, the other international side invited to compete at the Copa America, have also pulled out.

The 12 sides were to be split into northern and southern groups, with Qatar playing in the northern section against Brazil, Ecuador, Venezuela, Peru and hosts Colombia.

Australia were in the southern group with Bolivia, Uruguay, Paraguay, Chile and hosts Argentina.

A CONMEBOL source said they will look at the possibility of inviting two other teams to replace Australia and Qatar but the tournament will go ahead regardless, with 10 or 12 sides.

“Nothing will change, we will play with 10 if we have to,” the source said on condition of anonymity.

“No matter what happens, it’s the same format, same prize money, everything stays the same.”

The tournament is scheduled to kick off in Buenos Aires on June 11 and end with the final in Barranquilla, Colombia on July 10.