The Socceroos’ upcoming World Cup qualifiers could become the first international sports events hosted in Australia since the pandemic began without the need for teams to go through 14 days of quarantine, as Football Australia continues advanced talks with the government to fast-track exemptions.

Australia’s second stage of qualifiers for the 2022 World Cup in Qatar begin at home on September 2 against China but the FA needs the federal government to waive the mandatory 14-day quarantine for arrivals for the game to go ahead. 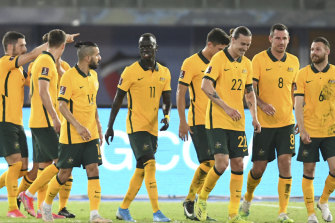 The Socceroos could be playing at home again beginning with September’s WCQ.Credit:AP

To avoid the Socceroos playing home games at neutral venues, FA is seeking an arrangement for both teams to train and stay in bubbles. There will also be safety measures to prevent players coming into contact with the public before, during and after games. That includes the possibility of seating arrangements for fans to remain a safe distance away from the sideline, benches and tunnel.

The Socceroos have one of the most dominant home records of any country in World Cup qualifiers, having lost just once in Australia since joining the Asian Football Confederation in 2006. That defeat was with a second string squad in a dead rubber against China in 2007. Playing at home would be a major boost to their chances of reaching the next World Cup but FA sources suggested they had looked at contingency plans if they were forced to play at neutral venues.

“The implementation of robust quarantine bubble arrangements that protect the health of teams, officials and the wider community will be absolutely central to our planning and discussions with government,” an FA spokesman said.

“Football Australia will make a further announcement about host city and stadium selections for matches against China in September, Oman in October and Saudi Arabia in November in due course.”

London has previously been used as a home for the Socceroos for friendlies but won’t likely be approved by the AFC as it is located outside the region, meaning Australia may have to play in countries such as UAE, Singapore, Malaysia or Hong Kong.

The federal government’s decision to reduce the cap on commercial international flights arriving in Australia doesn’t appear to pose a logistical problem for the Socceroos. They will have to undertake frequent travel to China, Oman, Vietnam, Japan and the UAE for their next round of qualifiers but have arrangements with airlines that could alleviate concerns and high costs.

The same can’t be said for A-League clubs recruiting foreign players and Australians based abroad. The soaring airfare costs as a result of the flight cap could prompt clubs to rethink their recruitment of players, potentially prioritising foreign stars without large families. Senior A-League sources informed The Sydney Morning Herald and The Age clubs were concerned the high airfare prices could effect the quality of foreign recruits. The new season is flagged to start on the last weekend of October or the first week of November.

Meanwhile, the Matildas lost 1-0 to Japan in a friendly match in preparation for the 2021 Tokyo Olympics. A handball by defender Alanna Kennedy gave away a second-half penalty to Japan, converted by Mana Iwabuchi, which was all that split the two teams. The result keeps the Matildas winless in all five games under new coach Tony Gustavsson.