Jackson Irvine is keeping his fingers crossed the coronavirus pandemic won't cost the Socceroos their chance to take on South America's best footballers in their backyard.

Hull City captain Irvine, like many Australian soccer players across the globe, is training in isolation due to the COVID-19 crisis. 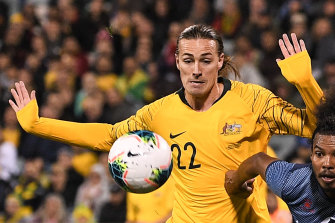 Jackson Irvine is hopeful the Socceroos will be able to take part in the rescheduled Copa America.Credit:AAP

He says he and Australian teammates had been counting down the days until the Socceroos made their debut in the Copa America in June as one of two guest nations.

Like so many other major sporting events in 2020 however, the continental showpiece has been postponed for 12 months and was rescheduled for the middle of next year.

That has put Australia's ability to take part in doubt with a backlog of Asian World Cup qualifiers looming once global soccer resumes.

Socceroos coach Graham Arnold has already said Australia would have to knock back the Copa invitation if it clashes with World Cup qualification matches.

"It was something we were all very much looking forward to," Irvine said.

"The idea of competing at that level against the calibre of opposition and individuals.

"Even being in South America, somewhere I've never been before. That's so appealing and would be so exciting.

"I suppose all the players will be very hopeful that the invitation still stands and a lot of us will still have the chance to go and compete at that tournament next year."

Irvine said living in the United Kingdom during the pandemic has been an unusual experience, especially after the virus hit England hard in the past fortnight.

"It did feel like it kind of crept up," he said.

"There was kind of talk about it originally and then it was like someone flicked a switch and it was like, wow, we're really in a situation here.

"The last few weeks it's been horrible to see how badly it's escalated.

"The streets are empty, we're only really allowed out for the essential stuff and for us as players we have to get our work in terms of the physical aspect of football; so we've been trying to get out to do our stuff at least once a day but it's just really deserted everywhere you go and, yes, it's a really strange kind of time."

While unsure how long he'll be away from the football pitch, Irvine can see a silver lining from the postponement if the Socceroos do get to face South America's best in 12 months' time.

"It just means that we're going to have another year of preparation and experience to bring to it, hopefully we can give ourselves an even better chance of competing at that level," he said.