James Maddison proved he’s back to his best against City, Antonio Conte’s tactical tweak has helped Harry Kane, and West Ham’s bubble could be about to burst… six things we learned from the Premier League on Boxing Day

Covid continued to weak havoc with the Premier League’s festive schedule, but there were still treats aplenty on Boxing Day despite three games being called off because of the virus.

League leaders Manchester City kept their foot firmly on the accelerator with a dominant 6-3 win over Leicester, while Romelu Lukaku came off the bench to score his first league goal since September as Chelsea came from behind to beat Aston Villa 3-1 at Villa Park.

Tottenham’s resurgence under Antonio Conte continued with a 3-0 win over Crystal Palace, while their north London neighbours Arsenal thrashed Norwich 5-0 to add to the Canaries’ woe.

Here Sportsmail takes a look at what we learned from the latest round of fixtures.

Leicester City may have shipped six goals against Manchester City and produced arguably their worst 45 minutes of football under Brendan Rodgers, but there was solace to be found in the drubbing at the hands of the Premier League champions.

After an abject first half, the visitors hauled themselves back into the contest with three goals in 10 minutes and threatened to make a game of it, before City eventually pulled out of sight again.

James Maddison played a pivotal role in all three goals, scoring Leicester’s first with a composed finish, before being involved in the lead-up to his side’s second and third goal.

It was the kind of virtuoso display that had looked out of Maddison’s reach for the best part of 2021.

With six goals and five assists in all competitions in the last five weeks, however, Maddison has rediscovered the form that had earned him an England call-up two years ago.

Leicester’s fortunes have travelled in the opposite direction and Rodgers’ best chance of salvaging the season rests in Maddison’s incisive passing, confident dribbling and deft touches. 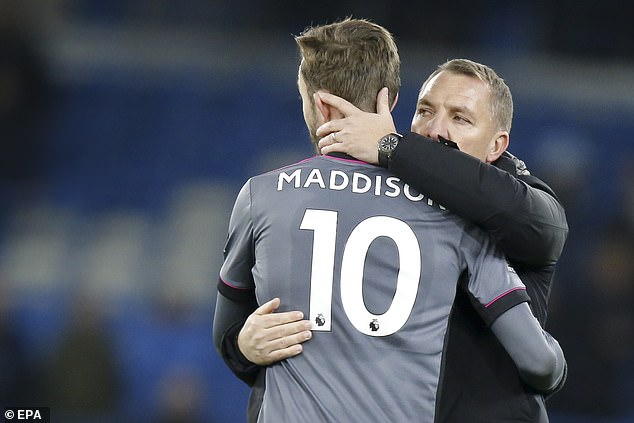 Few players have benefitted more from the Italian’s arrival than Harry Kane. Having looked a shadow of his prolific self for the first three months of the season, the England captain registered his second goal of the season against Liverpool last week and added a third against Palace.

Unlike Jose Mourinho, who asked Kane to drop deep to receive the ball, Conte wants him to play far higher up the pitch.

‘I think it helps, as good as he is dropping deep, I think if you play Harry Kane high you give Ndombele the chance to play from deep.

‘He can pick his pass look to feed Kane which is where you want him. What you want is Harry Kane in the box, being an attacking threat.’

Scoring regularly will do Kane’s confidence and Spurs’ chances of a top four finish a world of good. 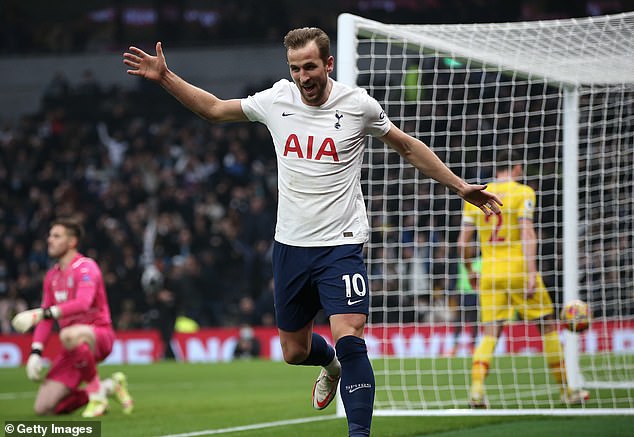 The feel-good factor that accompanied Dean Smith’s arrival at Norwich has all but dissipated.

The Canaries have picked up just five points in the former Aston Villa manager’s seven games in charge and Sunday’s 5-0 shellacking at the hands of Arsenal left them rooted at the bottom of the table.

Norwich are three points adrift of safety but have played two more games than Watford, who are currently 17th.

Following the defeat on Sunday – the club’s seventh in a row on Boxing Day, a new Premier League record – Smith admitted keeping Norwich up was a ‘bigger job’ than anticipated.

While a series of injuries and positive Covid cases have made life harder for the 50-year-old, the Canaries’ chief problem remains the same one that has plagued them throughout the season.

Norwich have scored just eight goals in the Premier League this season, six fewer than the next-worst attack in the league. 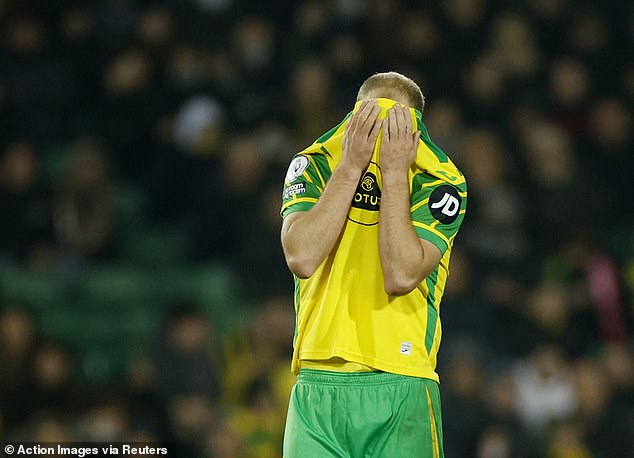 Brighton have earned plenty of praise for their football this season, while their manager Graham Potter has been touted as a possible candidate for a job at a bigger club in the not too distant future.

Plaudits, however, have not necessarily always translated into points and the Seagulls’ 2-0 win over Brentford on Sunday was their first in 12 games.

Brighton had last tasted success when they beat Leicester on September 19 and their last five games had returned just two goals.

‘It felt like a result that was very important for us,’ Potter said afterwards. ‘We’ve been on a frustrating run but goals change everything.’

With a trip to Stamford Bridge coming up on Wednesday, the challenge for the Seagulls is now to keep that run going. 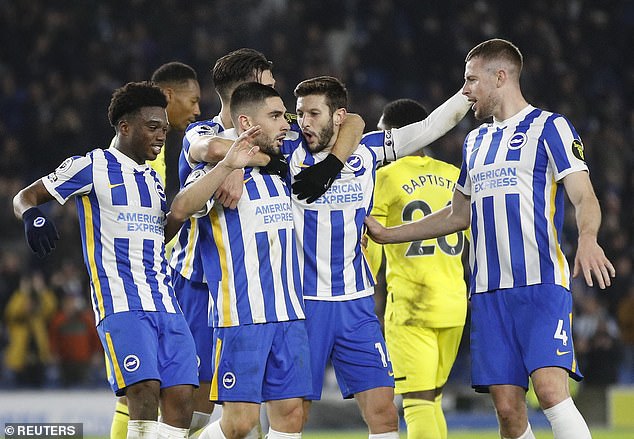 David Moyes pulled no punches following West Ham’s 3-2 defeat at home to Southampton on Sunday, suggesting he ‘could have changed four or five’ players at half-time.

Unfortunately for the Scotsman, such an abundance of riches doesn’t extend to his team’s defence.

Losing Kurt Zouma to a hamstring injury earlier this month appears to have been one blow too many for a back four already reeling from losing Angelo Ogbonna to a season-ending injury in November.

The loss to Southampton was West Ham’s fifth straight defeat in all competitions, and it left them sixth in the table and six points adrift of fourth-placed Arsenal.

Unless they can recruit a commanding centre-back in January, the Hammers’ bubble looks perilously close to bursting. 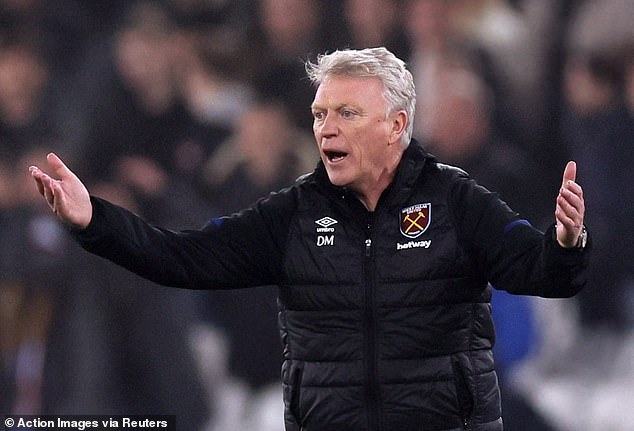 The results from the 1963 Boxing Day fixtures are as synonymous with the festive period as Christmas trees and presents.

On Sunday, 26 goals were scored across top-flight games on Boxing Day, a whopping 40 fewer than 58 years ago. However, this year’s edition can hold its head high.

Covid disruptions meant only six Premier League games went ahead, as opposed to 10 First Division games in 1963 and Sunday’s 4.7 goals per game ratio was the second-highest on December 26 since Boxing Day 58 years ago.

Manchester City’s 6-3 hammering of Leicester was the highest-scoring Boxing Day game in the top-flight since Manchester United won by the same scoreline away at Oldham in 1991.

And it was only the second time a Premier League club has scored six goals on the day – Arsenal beat Leeds 6-1 on Boxing Day in 2000. 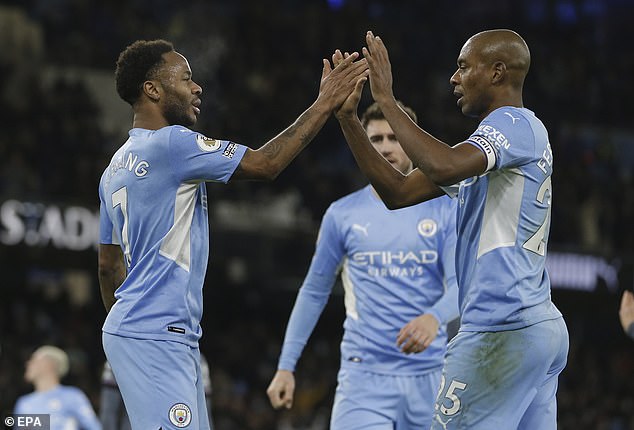