Wolverhampton goalkeeper Rui Patricio was carried off on a stretcher due to a serious head injury after receiving more than 10 minutes of treatment late in his team’s 1-0 loss to Liverpool in the English Premier League.

The Portugal international was struck on the head in the 87th minute by the knee of teammate Conor Coady, who was running back into his area during Monday’s match. Coady looked particularly concerned as medical staff attended to Patricio with caution. 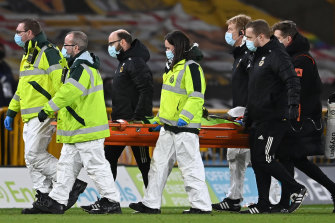 Rui Patricio is carried off the field at Molineux.Credit:Getty

Wolves manager Nuno Espirito Santo gave a positive update on Patricio’s condition after the game, saying: “He’s OK. He is conscious, he remembers what happened, he is aware. He is OK.”

“It was an awful situation. I have spoken to Wolves staff, they are rather positive. It was a proper shock,” he said.

In November, Wolves striker Raul Jimenez fractured his skull in a clash of heads playing a league match at Arsenal. Jimenez was in the stands at Molineux on Monday. 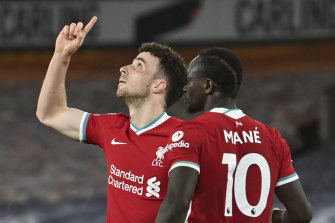 Diogo Jota scored the winner against the club he left to join Liverpool in September for about $52 million.

The Portugal forward’s low shot squirmed into the corner in the second minute of first-half stoppage time, with Patricio getting a hand on the ball but failing to keep it out at his near post.

Jota was playing his fourth straight game since returning from three months out because of a knee injury.

“Against these kind of teams you have to take advantage when they are unbalanced and they were in that moment. It was good movement and a good goal.

“We need to improve a lot in this competition and hopefully this can be the start of a great run to the end of the season.”

It was only Liverpool’s second win in their last eight league games of a title defence that has imploded in the second half of the season.

The Reds climbed two places to sixth, but were still five points behind fourth-placed Chelsea in the race for Champions League qualification with nine games remaining.

Aided by the return of Jota to spark the attack and Fabinho in the holding midfield role, there are small signs of a revival for the Reds, who also beat Leipzig last week to reach the Champions League quarter-finals.