Dean Henderson has a better save percentage than David de Gea but has made more errors leading to goals this season… with the pair facing uncertain futures this summer, who should Ole Gunnar Solskjaer pick for the Europa League final against Villarreal?

Manchester United’s Europa League final against Villarreal could well signal the end of the road at the club for one of David de Gea or Dean Henderson.

Reports over the last week suggest the Spaniard has won the race to start for Ole Gunnar Solskjaer’s men in Gdansk, and while that comes as a blow to Henderson, neither goalkeeper’s future at Old Trafford is certain.

ESPN claimed this week that whoever misses out in Poland is likely to leave the club this summer, a couple of weeks after Sky Sports reported top clubs across Europe are interested in Henderson. 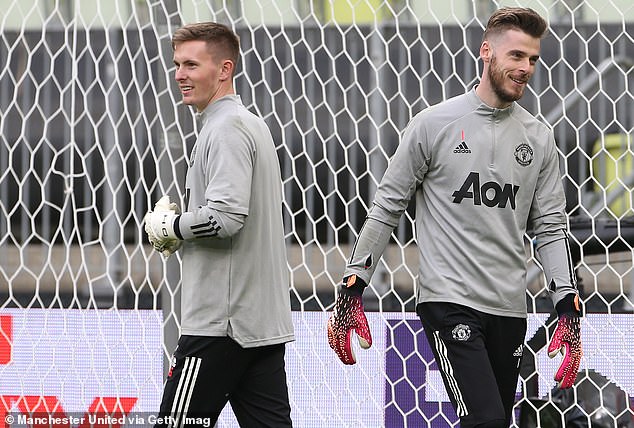 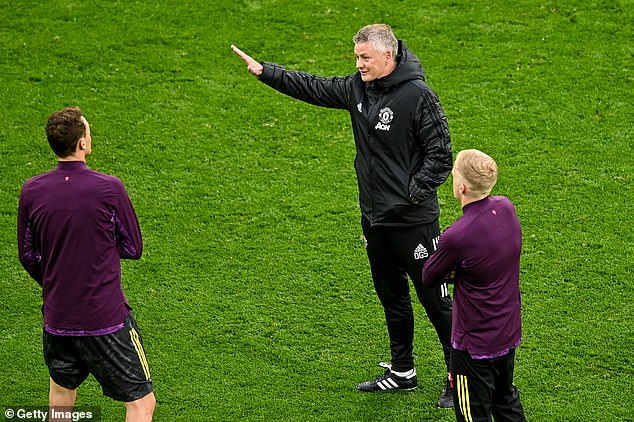 The 24-year-old also started 10 of United’s last 12 Premier League games of the 2020-21 season, but that appeared to open the door to his senior team-mate to play in Europe, which had become the focus with the club all-but guaranteed to finish runners-up to eventual champions Manchester City in the top flight.

But what do the statistics say about the duo’s performances this term, and what do they suggest about who should start in Poland? Sportsmail crunches the numbers as United attempt to win their first piece of silverware since the 2017 Europa League. 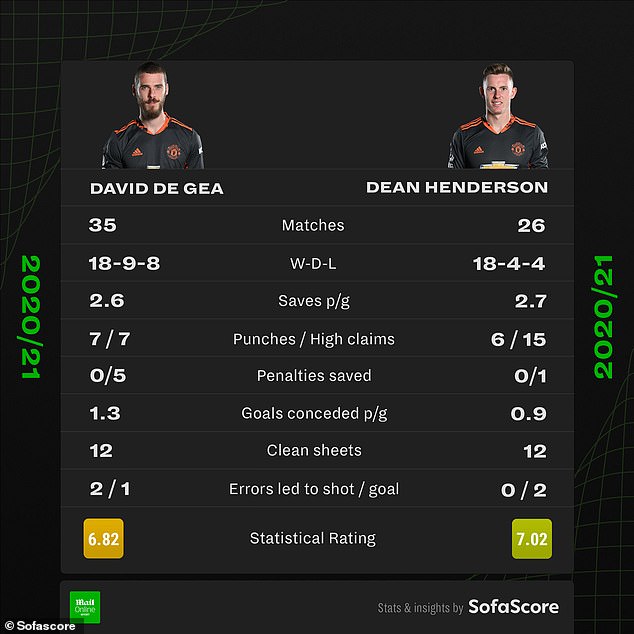 De Gea very much began the season as first-choice goalkeeper for United and that was reflected in the fact that the Spain goalkeeper played all but two of the Premier League games prior to his parental leave in March.

Henderson had just returned from a two-year loan spell at Sheffield United and was keen to impress Solskjaer, but had to make do with just one Premier League appearance in the first half of the season, at his former hunting ground Bramall Lane.

His other appearances came in the League Cup – a run which was ended by defeat by eventual winners City – and a solitary game in the defeat by Istanbul Basaksehir in the Champions League group stages, before the FA Cup campaign began in January and ended at the quarter-final stage.

But United’s dramatic failure to qualify for the knockout stages of the Champions League saw Henderson picked for the last 32 and last 16 rounds of the Europa League, while the birth of De Gea’s child then handed him opportunities in the league too. 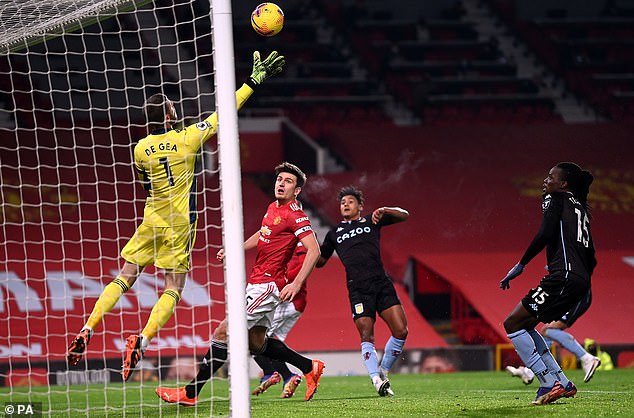 The rotation policy that Solskjaer has had to implement for the duo has therefore made for extensive data on the duo from this season, with the Spaniard playing 35 games across all competitions and his English counterpart 26 matches.

The Red Devils may have conceded 44 goals in the Premier League in 2020-21, the most of any side that finished in the top four, but the goalkeepers have so far recorded 25 clean sheets between them in all competitions, including 13 for Henderson. 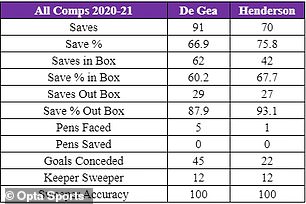 But given that he has played nine more games, the former Atletico Madrid star has been forced into action more times than Henderson, making 91 saves compared to the latter’s 70.

Of those saves made by De Gea, 62 were made inside the box, and of all the shots he faced in the area he saved 60 per cent of them.

That save percentage rises to nearly 90 per cent for efforts from outside the box, and he appears to be an effective sweeper keeper having perfectly executed the clearances he has made when charging out of the box.

However, despite playing fewer minutes and managing fewer saves, Henderson can either match or better the majority of de Gea’s achievements in goal across all competitions this term.

He has been as consistent in mopping up behind the defence but has a superior save percentage of nearly 68 per cent inside the box despite having faced 20 fewer efforts on goal. 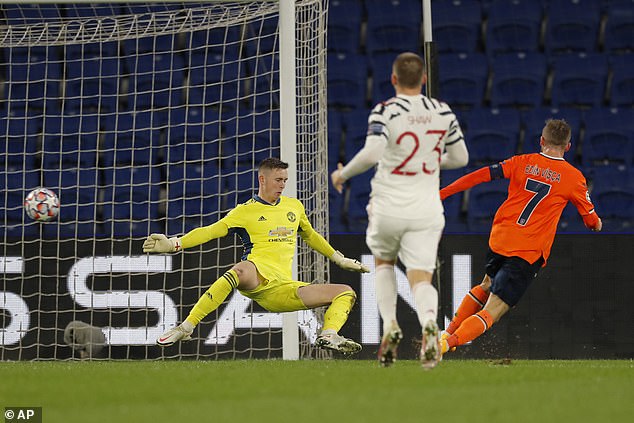 That same statistic bounces up to an incredible 93 per cent for outside the area, and leads the 24-year-old to have an overall save percentage of more than 75 per cent.

The duo have not saved any of the six penalties they have faced this season, and while they both will hope for better in 2021-22. But Henderson clearly has the upper hand when it comes to goals conceded, letting in just 22 goals, with that figure more than doubling to 45 for de Gea.

In the Europa League alone this term, both have incredibly impressive returns, with United conceding just six goals on their way to Gdansk. 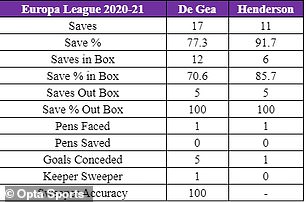 The pair have saved all the shots that have been on target from outside the box against Real Sociedad, AC Milan, Granada and Roma, while their save percentage inside the box and save percentage overall both significantly increase in comparison to their numbers across all competitions.

However, Henderson does lead the way in one unenviable aspect, having made two errors (against Sheffield United and Liverpool) which have directly led to goals compared to de Gea’s one (against Everton) this term.

And it is for that reason the England goalkeeper has perhaps received more criticism when he has been in goal this term, with the Spaniard only really criticised for not being brave enough for Dominic Calvert-Lewin’s dramatic last-gasp equaliser in the Toffees’ 3-3 draw at Old Trafford.

Meanwhile, as recently as earlier this month, Henderson’s performance was scrutinised in the home defeat by Liverpool, after he spilled a Trent Alexander-Arnold shot into the path of eventual goalscorer Roberto Firmino. 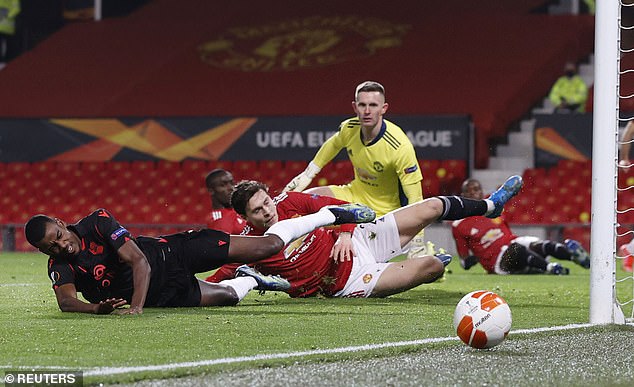 The former United captain said: ‘He looks so small in the goals, that’s my worry [over] Henderson.

‘He has a good mentality, good temperament and is good with his feet, but I’ve seen a few goals go in recently where he looks so small in the goals.

‘He [Henderson] is going to make mistakes of course, but my worry is his presence. He looks so small, which is a big concern going forward.’ Henderson also faced criticism for failing to prevent a six-yard header from Simon Kjaer to bring Milan level at Old Trafford. 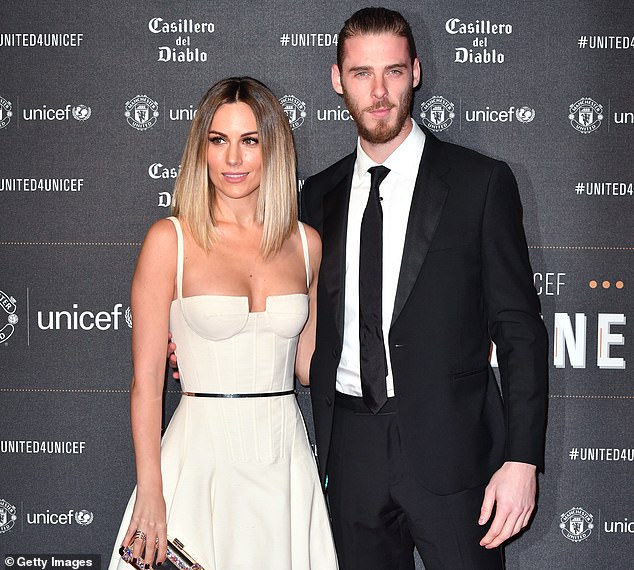 The former Blades keeper only wants to stay at Old Trafford next season if he is Solskjaer’s No 1, which has been thrown into doubt by the Norwegian’s decision to start de Gea against Granada and Roma.

De Gea meanwhile is the Premier League’s best-paid player on £375,000-a-week and whether United would be able to find a buyer who would be willing to offer him any salary close to that during a pandemic remains to be seen.

But with his contract coming to an end in 2023 and now being in his thirties, the Spaniard himself has been linked with a move away too, with former club Atletico Madrid, PSG and Roma all rumoured to be interested in ending his decade-long stay at Old Trafford.

Reports last month also suggested de Gea’s relationship with Solskjaer had become a problem due to Henderson’s extended run in the team after arriving back from Spain following the birth of his daughter.

Moreover, his powers are believed to have waned over the last few seasons and with a potential transfer fee as high as £40million, United could make decent money depending on where they stand with him once they have played against Unai Emery’s side. 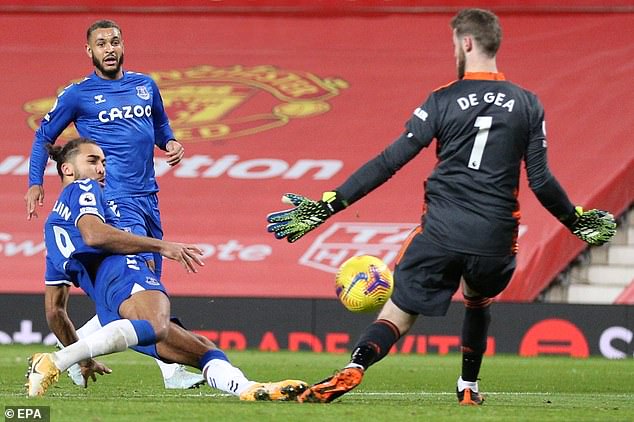 But while Solskjaer has kept his cards close to his chest in recent weeks about who will get the nod in Gdansk though, Gary Neville insisted he would not be surprised if de Gea is the player to start the final.

Speaking ahead of the Fulham game last week – which de Gea started – Solskjaer said: ‘It is David’s turn to play now. Of course he has played in Europe, Dean’s played most of the league games.

‘For me it is about having two keepers ready for the final which is important.’

Asked if he had decided who would start the Europa League final, the Norwegian added: ‘It is up for grabs. I will make up my mind after these last two league games.’

Henderson started the final Premier League game of the season – a 2-1 win at Wolves – but this week the Norwegian perhaps opened up a touch more on his thinking ahead of his first European final as manager. 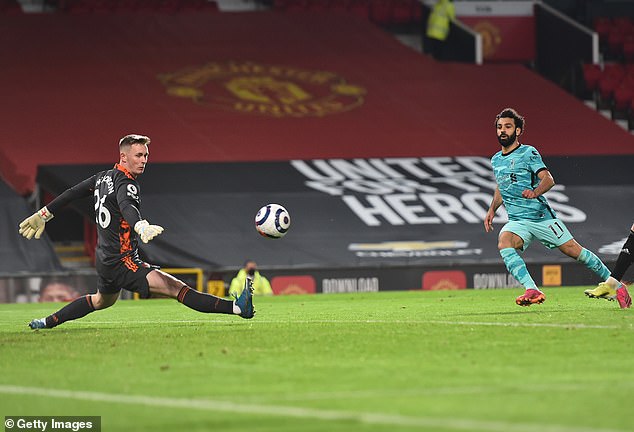 ‘It’s always difficult to leave players out, but it’s throughout the whole season,’ Solskjaer said.

‘A final is a reward for what you’ve done the whole season, then if there’s a doubt between a couple it’s the form in the latter stages, of course.’

That final criterion would appear to favour de Gea in that case given Henderson’s high-profile blunders against Liverpool, mistakes United simply cannot afford if they wish to end their recent trophy drought.

A look at rivals Chelsea perhaps demonstrates that the policy of sticking with your nominated cup goalkeeper can sometimes backfire.

Kepa Arrizabalaga was not at fault for Youri Tielemans’ wonder strike in the FA Cup final, but the Spaniard’s struggles against long-range shots is no doubt a weakness that the Foxes were no doubt told to target. 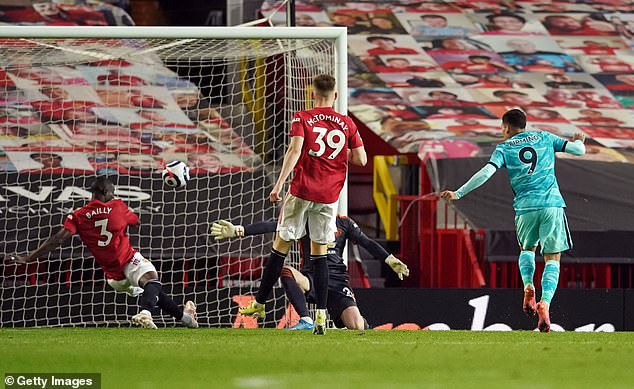 And having been under that same label for much of this season – albeit demonstrating far superior numbers to Kepa – Solskjaer may well just be tempted to go with the tried and trusted, which Thomas Tuchel veered away from with Edouard Mendy at Wembley.

Henderson agreed a new six-year contract worth up to £120,000-a-week in August last year but all the signals point to him having to make do with a place on the bench against Villarreal.

And despite what has been a respectable return for a goalkeeper’s first full season in which he has seen regular playing time at a ‘Big Six’ club, it appears likely that Henderson will be forced or force himself to leave Old Trafford this summer.

Reports in February suggested Tottenham and Borussia Dortmund were leading the race to sign Henderson after he had become frustrated with a lack of first-team football, and with both sides still looking for a new No 1, it could yet play into Henderson’s hands. 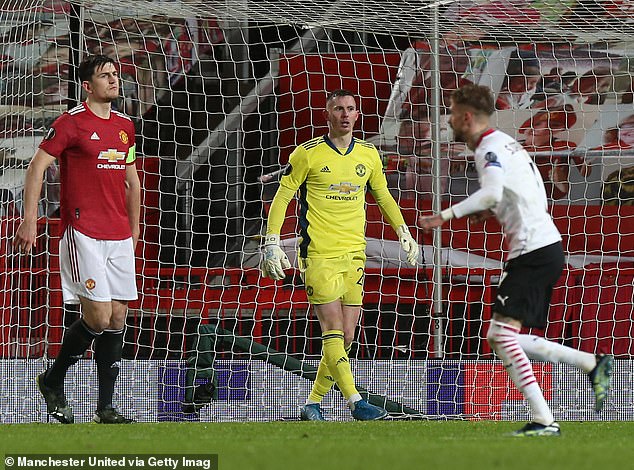 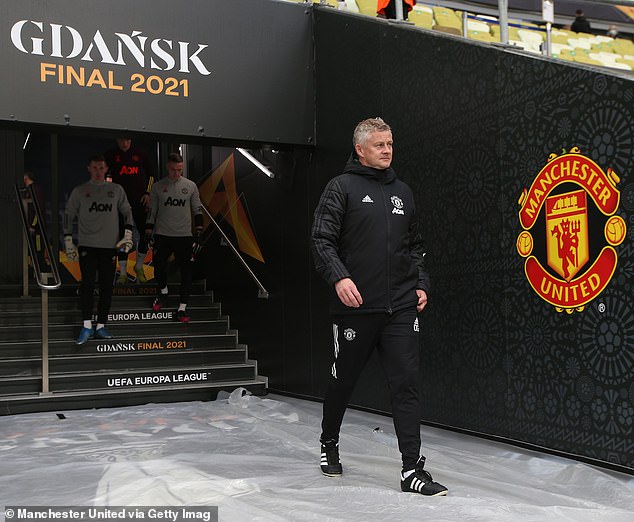 And with those mistakes, all the signals suggest Solksjaer will opt for de Gea in Gdansk