Is this the worst miss ever? Shakhtar Donetsk forward Danylo Sikan fails to roll the ball into an empty net against Celtic… and the shocking miss could prove costly to Ukrainian side in bid to reach the Champions League last-16

Shakhtar Donetsk’s Danylo Sikan was left red-faced after one of the worst misses ever during the draw with Celtic in the Champions League.

The 21-year-old forward had the chance to roll the ball into an empty net in the 72nd minute on Tuesday night.

But Sikan somehow contrived to miss the target from point blank range with the score tied at 1-1 deep into the second half at Celtic Park. 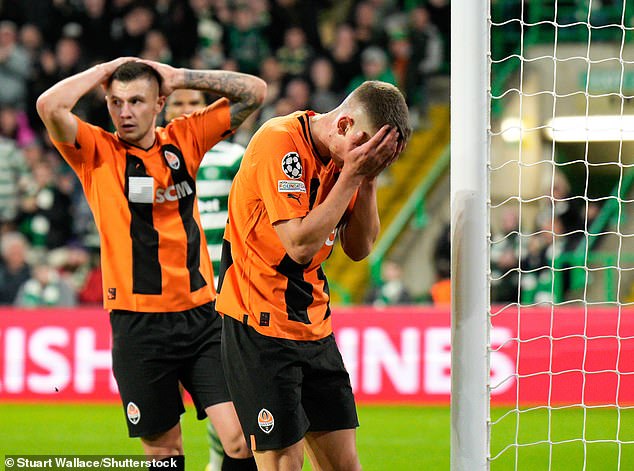 Star man Mykhaylo Mudryk’s darting run saw him draw Joe Hart out and square for his team-mate, who failed to adjust his body and allowed the ball to ricochet off his left foot and spin wide of the post in front of the incredulous home fans.

It was an embarrassing miss that could prove decisive as Shakhtar are third in their group, three points off RB Leipzig with one game to play.

Giorgos Giakoumakis gave the hosts the lead at half-time but a brilliant finish from exciting young talent Mykhailo Mudryk earned the visitors a point and made it 10 Champions League home games without a win for Celtic, a run which stretches back nine years. 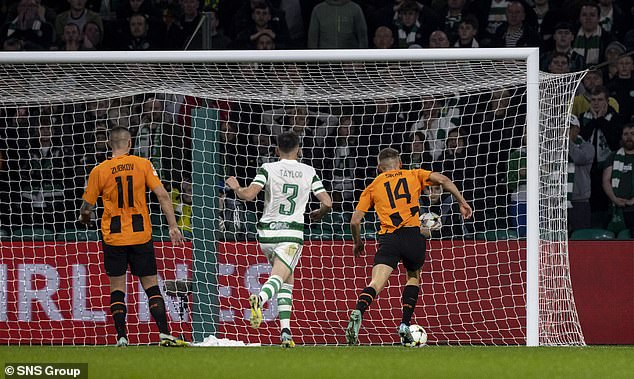 The result consigned Celtic to a bottom-placed finish in Group F ahead of their final game against holders Real Madrid in Spain next week and blocked their escape route to the Europa League.

The Scottish champions did not quite create the quality of chances they had in earlier group games but Kyogo Furuhashi missed an excellent opportunity to put them back in front. However, the visitors subsequently produced a strong contender for miss of the season.

Celtic’s tally of one point and two goals from their opening four matches was scant reward for their attacking ambition and Ange Postecoglou was even bolder in his approach for their final home match in this season’s competition.