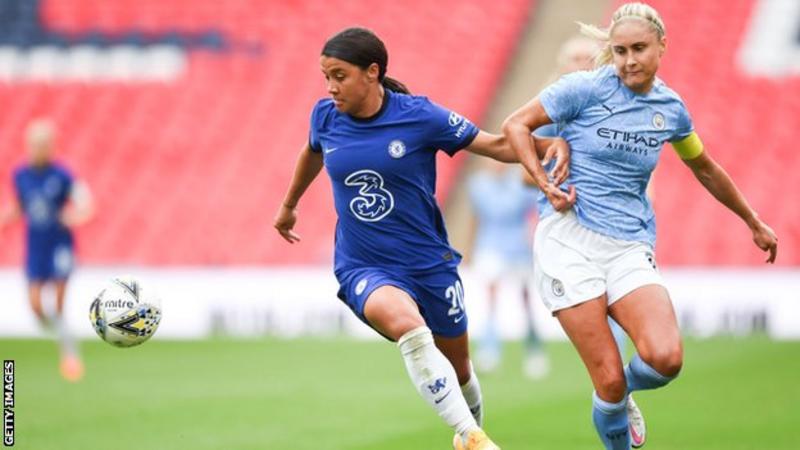 When Sam Kerr raced through on goal 90 seconds into her Chelsea debut and smashed it over the bar, few would have expected that to become a common sight.

But eight months on, the Australia striker had a “Wembley nightmare”, despite celebrating her second trophy in six months.

Kerr’s arrival in England was huge. She had broken records in the United States and her home nation, made her international debut at just 15 and already captained her country at a World Cup.

But the 26-year-old has found it hard to hit the ground running, scoring once in seven appearances.

And despite Chelsea recording a 2-0 victory over Manchester City in the Women’s Community Shield, it would have been much more were it not for Kerr’s “painfully bad” day in front of goal.

After Saturday’s match at Wembley, Chelsea manager Emma Hayes said Kerr had “caused problems and created chances” for her team.

“If you’ve got a striker who’s not creating chances, that’s a concern,” Hayes added. “Sam has been outstanding in pre-season and I expect that she’ll be on the training pitch tomorrow, working at her finishing.

“I’m not disappointed in anything with her game today.”

‘Just one of those days’

The most surprising miss from Kerr came when England international Fran Kirby slid the ball across goal for the striker to poke home from a few yards out early in the second half.

But Kerr missed the target, skewing her shot wide again. Former Chelsea midfielder Karen Carney told BBC One it had “been a nightmare” for Kerr, while Dion Dublin, the ex-Aston Villa and Manchester United striker, said the Australian “hasn’t got her shooting boots on”.

Kerr spurned numerous chances – firing wide when one-on-one with the keeper, heading past the post when unmarked and slicing several shots from inside the box.

“You can see Emma Hayes is frustrated,” Carney added. “Where Chelsea want to go, she has to bury those chances. Sometimes it’s just one of those days and you just think: ‘Get me off the pitch now.'”

Kerr was eventually substituted in the 72nd minute, moments after she embraced goalscorer Millie Bright in relief, and was given several pats on the back by her team-mates as she walked off the pitch.

“It was definitely an off day,” former England goalkeeper Rachel Brown-Finnis told BBC Sport. “I don’t expect another day as painfully bad for her.

“It just wasn’t happening for her. She tried to have a deft touch and it bounced off her; she had a header and it didn’t come off. It’s one of those days where you just feel like: ‘Unbelievable. Can I even play football any more?'”

However, Brown-Finnis is convinced Kerr will put the performance “behind her” and show “huge resilience” before champions Chelsea’s Women’s Super League opener against Manchester United on 6 September.

“I have no doubt she is in the most capable hands [in manager Hayes] and I have no doubt we will see the best version of Sam Kerr, which we haven’t seen yet since she joined Chelsea,” added Brown-Finnis.

While Kerr struggled in front of goal, it was a memorable day for Kirby, who returned to the Chelsea line-up to make her first appearance since November 2019.

Kirby, who admitted in April she had contemplated telling England manager Phil Neville and Hayes that she was “done” with football, was diagnosed with pericarditis last year and has faced a tough return to fitness.

So to see the 27-year-old forward making penetrating runs down the right wing, linking up with Chelsea midfielder Ji So-yun and creating numerous opportunities for Kerr, was a huge positive at Wembley.

While recovering from illness, Kirby has had to sit on the sidelines while compatriot Bethany England picked up last season’s WSL player of the year award following her 14 goals in 15 games.

Kerr’s arrival in November was another threat to Kirby’s position, while Hayes has further strengthened in attacking positions this summer, bringing in 21-year-old Niamh Charles from relegated Liverpool.

But her performance against City on Saturday was a show of intent from the England forward, who will hope to play a key role in Chelsea’s title defence this season.