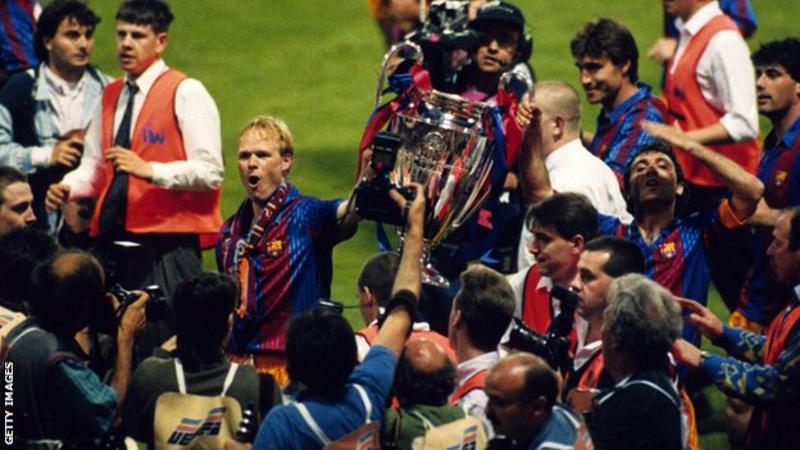 Ronald Koeman, strongly tipped to be the new Barcelona boss, says he would like the job but that nothing has been finalised yet.

The 57-year-old, who is manager of the Netherlands, is set to join the La Liga runners-up this week.

When the former Barca player was asked if he wanted to return, he said: “I’d like to, but it’ll only be confirmed once I’ve signed the deal.

“Until then, I cannot say any more about it – even though I’d like to.”

Koeman played for the Catalan giants between 1989 and 1995, helping the club to four league titles and the European Cup.

His contract with the Dutch FA runs until the 2022 World Cup.

The dismissals come after the club’s humiliating 8-2 defeat by Bayern Munich in the Champions League last eight on Friday.

Barcelona said: “The club would publicly like to thank Eric Abidal for his professionalism, commitment, dedication and the close and positive nature of his relationship with all aspects of the blaugrana [Barcelona] family.”

Meanwhile, Barca’s German goalkeeper Marc-Andre ter Stegen, 28, will be sidelined for 10 weeks after an operation on his right knee.

Koeman is going to be given a two-year deal. He would have said yes to a one-year deal. He has been trying to get to Barcelona for a long while.

Former Tottenham manager Mauricio Pochettino was contacted and there were talks with him even though the chairman realised the fans wouldn’t like him [as a former Espanyol player and manager].

Pochettino is a better option. There is no doubt about that.

But we’re not talking about the real issue. Barca are a club that’s in disarray with a debt that some calculate could be 700m euros and unable to move on because they spend 70% of their income on wages for the first team.