Barcelona have not spent wisely in the transfer market since Neymar left the club and are still too reliant on Lionel Messi, according to Manchester United legend Rio Ferdinand. Neymar left Barcelona for Paris Saint-Germain in the summer of 2017 for a world-record transfer fee of £200million. The La Liga giants have made a host of big signings since the departure of the Brazilian but not all have been effective.

Ousmane Dembele and Philippe Coutinho cost Barca over £100m each but both see their futures at the club in serious doubt after a difficult couple of years.

Last summer, Antoine Griezmann arrived from Atletico Madrid for £108m but the Frenchman has had a difficult start to life at the Nou Camp.

This season was the first time since Neymar left the club that Barcelona did not win La Liga, with Real Madrid claiming top spot.

And Barca were underdogs going into their Champions League quarter-final against Bayern Munich on Friday night.

JUST IN: Chelsea backed to make one signing because of Kai Havertz and Timo Werner 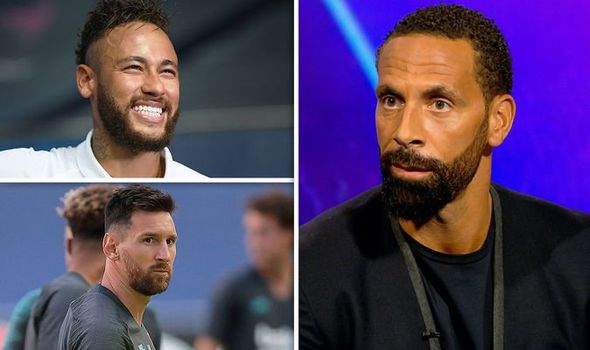 Ferdinand says that speaks volumes for the club’s mistakes in the transfer market and claims there is too much reliance on experienced players such as Messi.

“They’ve spent, what is it, £800m since Neymar left and still they’re reliant on Messi, who came through the youth system there and the older players in the team who were there before that was spent as well,” Ferdinand said on BT Sport.

“They’ve not recruited in terms of spending that money wisely I don’t think going forward.

“But listen, when you’ve got Messi in your team you can make a few mistakes because invariably he’s got them out of trouble.”

Barca boss Quique Setien only picked a couple of attackers in his line-up to face Bayern and Owen Hargreaves says it was a sign of respect for his former side.

“Obviously Griezmann and [Ivan] Rakitic would start if they could but I think this is a bit more of a team to protect and hope Suarez and Messi can get them out of trouble.

“But if you think about all the money that Barcelona have spent, you’ve got a lot of guys not playing their natural position.

“On the other side, on the flip, you’ve got Bayern. That team picks itself every game.

“I think if you look at the starting XIs, the advantage goes to Bayern to start.”