It’s WORSE than he imagined! Rangnick is stunned by the state he has found Man United in… with too many egos and no unity, the German feels he has his work cut out to reach the top four

Ralf Rangnick is a meticulous man who would have taken time to study Manchester United’s form before he officially took over as coach. He is one of the undoubted ‘brains’ of world football and would have understood the issues they faced. He is no innocent abroad.

Despite that, according to those close to the German, he has been shocked at quite how far United have fallen and how badly the club is misfiring.

Rangnick was said to be bitterly disappointed in the immediate aftermath of the Wolves defeat last Monday. Understandable, of course. But the disappointment went beyond the defeat itself. 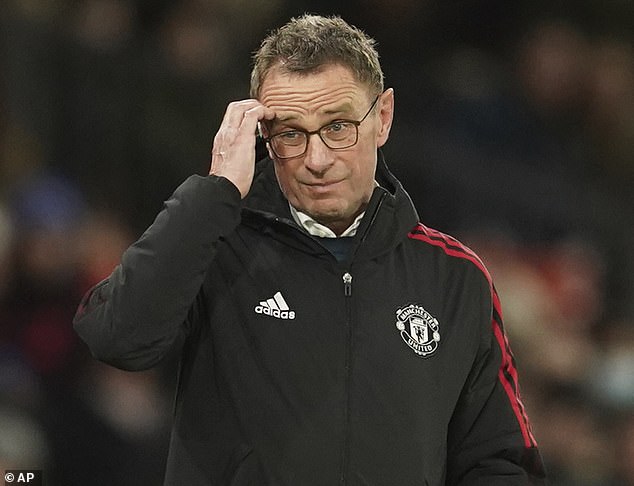 The malaise in the team, evident also in the performances against Norwich and Newcastle, has made it clear to Rangnick that this job is even more difficult than he could have imagined.

He now understands that reaching the top four and Champions League qualification, which seemed a reasonable proposition on arrival, is going to be hard to achieve.

When he took the job at the end of November, Rangnick can’t have envisaged that FA Cup third-round weekend would provide a critical test of his credentials.

United take on Villa at Old Trafford on Monday night and it will take a huge improvement in recent performances to prevent the atmosphere turning toxic. 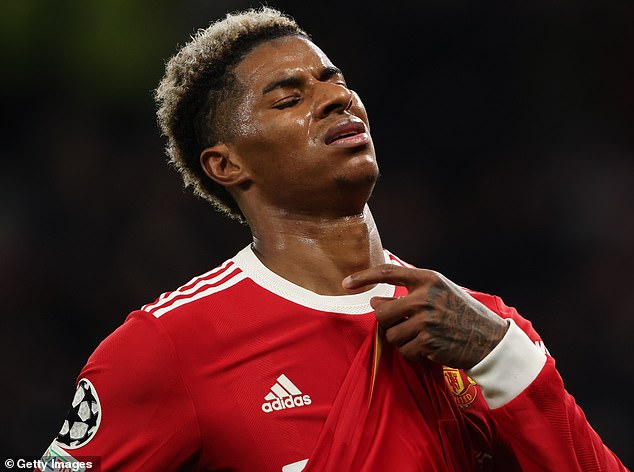 Compromise is the order of the day if he is to launch United on a Cup run and make it into the top four. It is quite clear from his first five weeks in charge that he cannot play his ‘rock ‘n roll football’ — the phrase his teams use to describe the Rangnick style — with the likes of Cristiano Ronaldo and Bruno Fernandes.

Specifically, he feels that style isn’t suited to his defenders. Captain Harry Maguire is enduring a wretched run of form after getting back to his best at the Euros last summer and conceded last night that his performances have been below par.

It is also understood that Rangnick’s coaching team think the physical conditioning of the team is below what they had expected.

But how much can Rangnick afford to compromise?

He was brought to the club to help them play catch-up in the modern tactical game, to narrow the gap on Jurgen Klopp and Pep Guardiola. 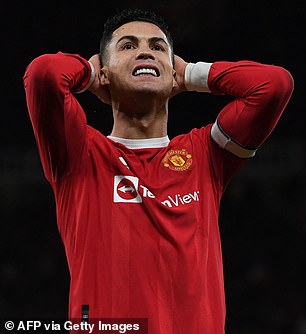 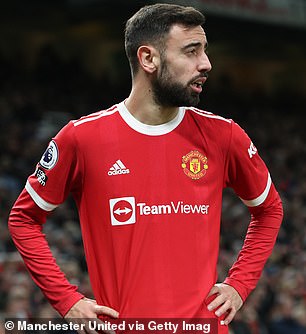 Compromise too much and he will merely be a meagre shadow of his predecessors.

If he’s going to fail, he might as well do so on his own terms, attempting to play the fast-moving, high-pressing, position-disciplined game with which he made his name at the clubs he transformed — Hoffenheim and RB Leipzig.

He also faces the inevitable problems of any interim manager. Rafa Benitez hated the title at Chelsea and felt it drained him of authority. Rangnick has a two-year consultancy contract after the summer, which, if used smartly, could transform the club. But even that role remains undefined.

If Erik ten Hag or Mauricio Pochettino take over as manager, what would be the point of Rangnick? Those who know him well feel the role can only work effectively if the team hires the right coach who operates in the Rangnick style. 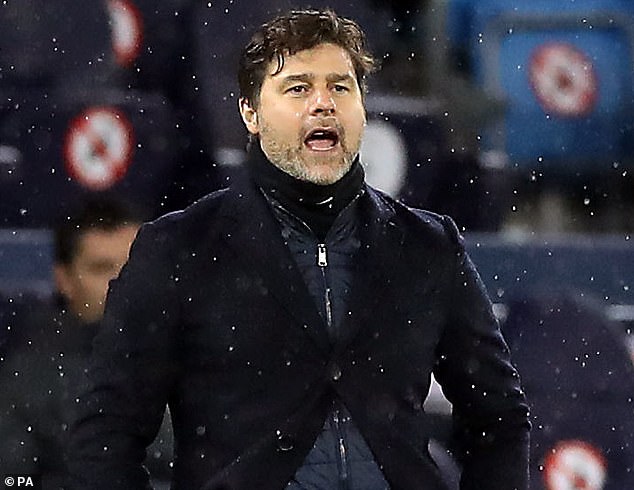 That would be one way to reanimate Manchester United. Yet Rangnick knows that if the club appoint Pochettino or Ten Hag, they will have to do what the new manager wants and he would effectively become superfluous.

Doubtless, players have worked through these scenarios and concluded that Rangnick won’t be around in 2023, let alone 2024.

Some of the issues the new manager faces will be familiar to anyone who has been paying attention to Manchester Untied.

He is understood to be frustrated at trying to construct a coherent tactical system for a group of players signed by five different coaches with differing ideas. There has been no continuity in United’s managerial appointments — a solid Scotsman in the Sir Alex Ferguson mould, through elite super coaches to the popular old boy bringing back the feelgood factor.

There is seemingly no understanding of the nuances in those coaches’ tactical approaches among the executives. 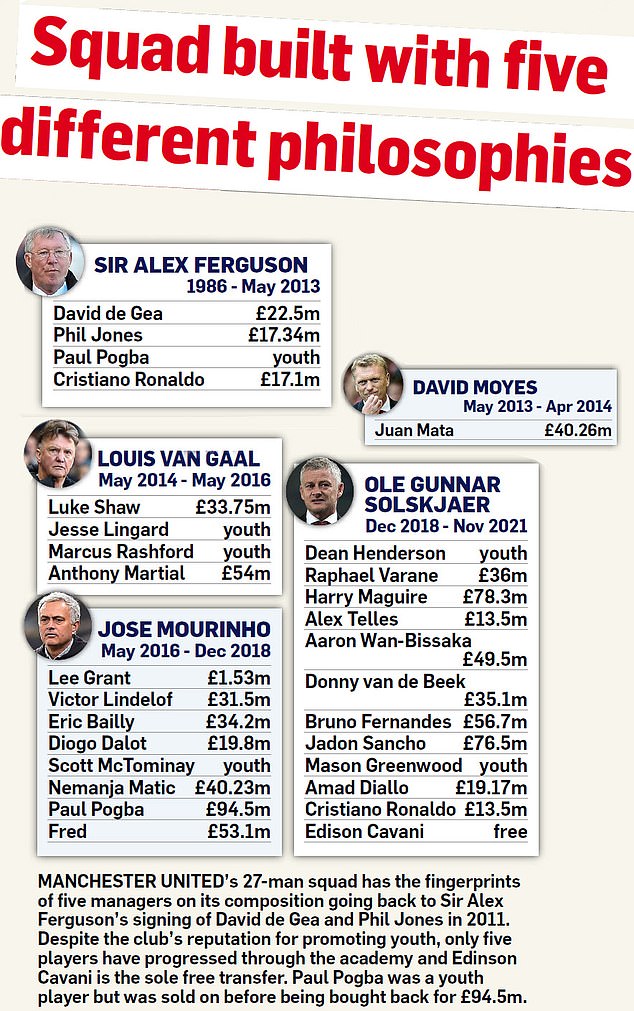 That is surprising to a German who is used to working with superiors who possess a deep understanding of the game.

Not one of the departing Ed Woodward, the incoming Richard Arnold nor owners Avram and Joel Glazer possess such an understanding.

It is said Rangnick has received no detailed explanation as to how his team should play.

The first five weeks at United have been an eye-opener in so many ways for the interim coach and to exacerbate matters his time has been disrupted by the Covid outbreak, which shut the training ground and robbed him of valuable time with his core players.

He made a throwaway comment about possibly staying on at the end of the season in his first press conference. That, however, was before he had seen the club and the team itself up close. 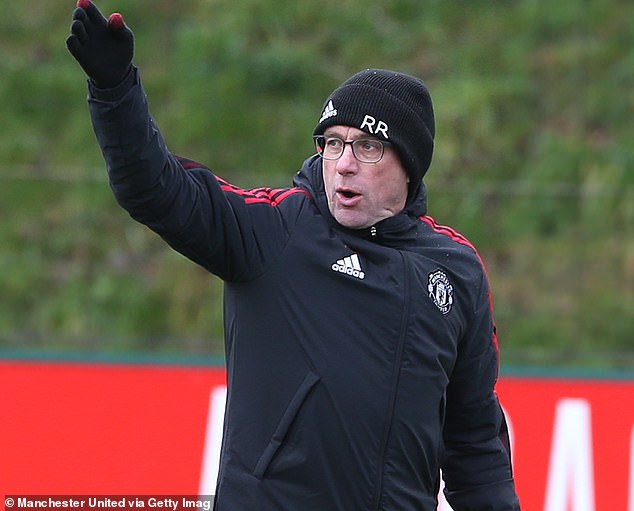 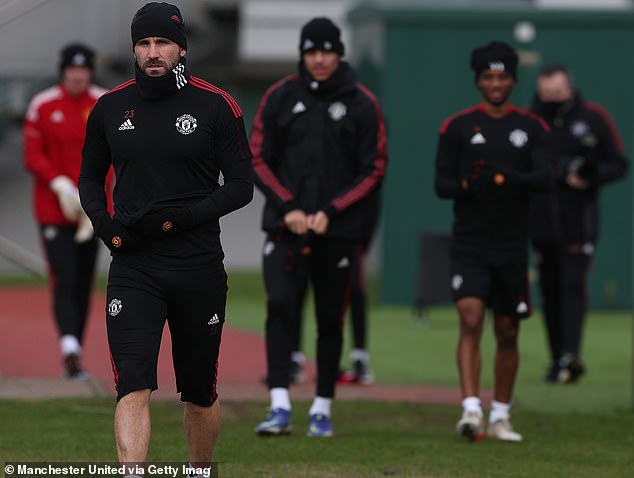 It would still be his preferred choice to either coach or direct a new coach at Manchester United. But he is more aware than ever that the job will be over the long haul and will at times be painful.

Some of the issues he is encountering were entirely predictable.

Rangnick had previously worked with players he has moulded — often young hopefuls or misfits who suffered rejection.

These players had been scouted and bought to suit his tactical needs. They were quick, young, devoid of ego and had an eager mentality to absorb all they could from a tactical maestro. That description does not fit many of the players at Manchester United.

Rangnick is having to tease performances from a group of players whose unity has disintegrated and who represent the antithesis of United dressing rooms of old.

Luke Shaw gave an indication of that after the Wolves game when he said: ‘I didn’t feel when I was on the pitch that we were all there together.’

Gary Neville was more specific after the Newcastle game, criticising Fernandes’ body language and Ronaldo’s habit of stalking angrily down the tunnel without acknowledging fans or team-mates after poor results.

It happened against Everton and has been repeated. ‘He’s run off again tonight,’ said Neville after the Newcastle game. ‘He ran off at Watford when the manager was going to get sacked and at Norwich. Bruno’s whingeing.

‘They’re the two senior players in that dressing room and it’s devastating for younger players if two of the best players in the team are looking at the others as though they’re not good enough — when they’re giving that look and body language at the younger ones.’ 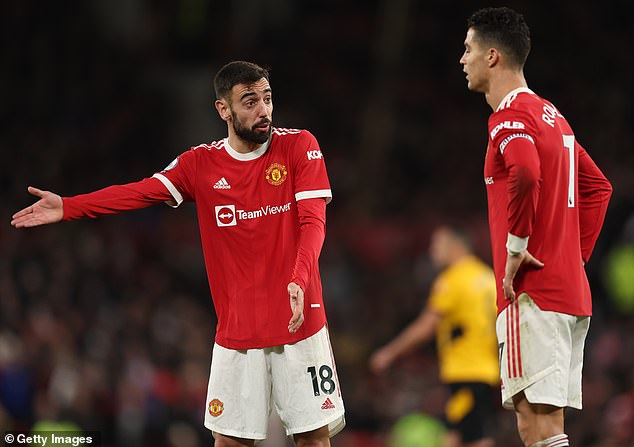 Neville was more general in his comments after the wretched first-half performance at Newcastle — but still damning of culprits.

‘They’re a bunch of whinge-bags. Watch them on that pitch. They’re whingeing at each other, their arms are up in the air, complaining about everything.

‘Honestly, they’re absolutely shocking. They got the last manager the sack and they’ll get a lot of managers the sack if they carry on like that.’

Rangnick has questioned the intensity of his players and their ability to work together.

‘We have made some progress but obviously the game against Wolves was a step back, a relapse to habits the team has shown in the past, so we need to insist that we have to work together.’ 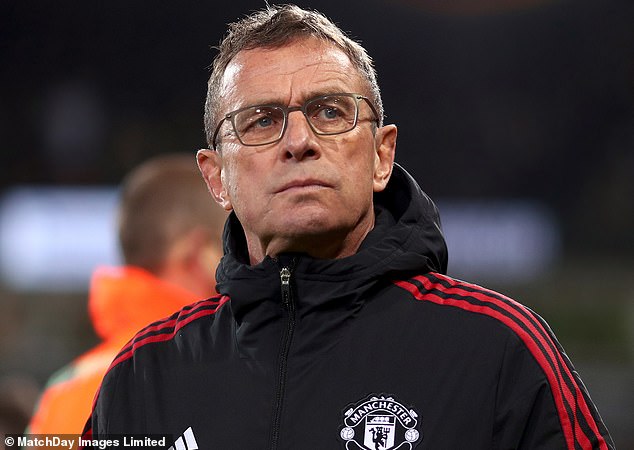 That is key for Rangnick. The team has to be ready to press with intensity and make quick, instinctive decisions to attack when they do win the ball back.

At his press conference on Friday, Rangnick indicated that he is fully aware of the lack of cohesion.

‘We have to do the same things at the same time, we have to do it simultaneously and we have to do it with passion, emotion and intensity and this was the problem against Wolves in first half, when we were escorting them. If we look at it clearly, it was only David de Gea who objected to them easily going to our goal.’

The ‘escorting them’ phrase is a brutal assessment of any team, the opposite of how Hoffenheim and RB Leipzig played.

Rangnick’s own ideas are also being challenged, however. 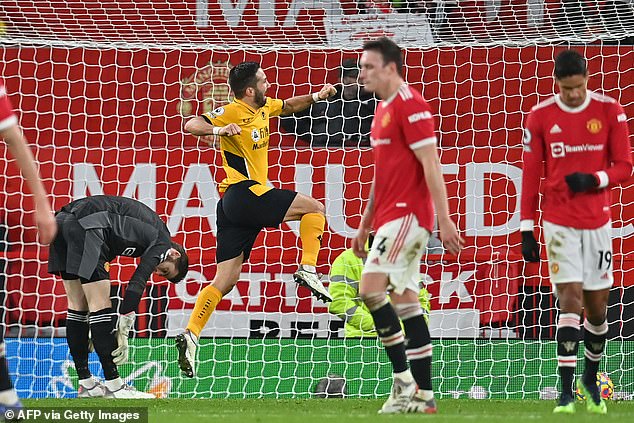 His 4-2-2-2 formation was exposed by Bruno Lage to such an extent that United had to switch to a back three, with the Wolves manager highlighting the space available to attack United’s full-backs.

For a squad which includes a glut of wide players, Rangnick’s preferred plan is narrow and fails to make the best use of Fernandes.

Rangnick acknowledged on Friday that it was only really working in one respect — the team is now conceding 0.6 goals per game rather than 1.7.

It may be more illuminating to examine the goals conceded column in March after a run of games against Manchester City, Tottenham, Liverpool and Atletico Madrid.

Those who know Rangnick though are not despairing. They point out that he has been written off several times and bounced back from numerous setbacks. His fighting qualities has seen him through.

Monday’s FA Cup game against Villa will clearly be an important marker. At least he has now had a good block of time with the majority of his essential players — training from Thursday through to Sunday this week.

Rangnick’s ideas only work if he is given time on the training pitch — something that the Covid crisis and Christmas schedule have rendered impossible.

Everyone is now anticipating improvement, maybe even a change in the system. It is hard to see how things could get worse.