Rafa Benitez can breathe a little easier. His controversial Everton stewardship began with a 3-1 victory over Southampton, which was built on the bricks of quality, fight and resilience with debutants, and those the club bank on to perform, impressing at Goodison.

Ralph Hasenhuttl, conversely, will already be dreading the worst.

Where optimism and hope colours the start of a new season, the mood at Goodison was apprehensive rather than ecstatic during the warm-ups: Everton supporters grappling with a manager they don’t want, while their Southampton counterparts mourned the absence of a striker they didn’t want to lose.

It has been 11 years since Benitez was Liverpool manager, but he was. His affection and affiliation to the other team on Merseyside remained concrete through his spells in Italy, Spain and China, as well as at Chelsea and Newcastle United.

The 61-year-old – only the second man to take charge of both clubs in the city after William Edward Barclay in the late 19th century – is as steely as they come, though.

While he can completely park his connection with Liverpool, it is a much harder poison to swallow for a large swathe of supporters.

But they did as kick-off approached here. When the stadium announcer offered Benitez a warm welcome as the Everton’s new manager, there were no boos and not a smidgeon of dissent.

The moment was marked with loud cheers and applause. Benitez clapped the home supporters in return and he, with a limited squad and financially hamstrung in the market, was off the mark. 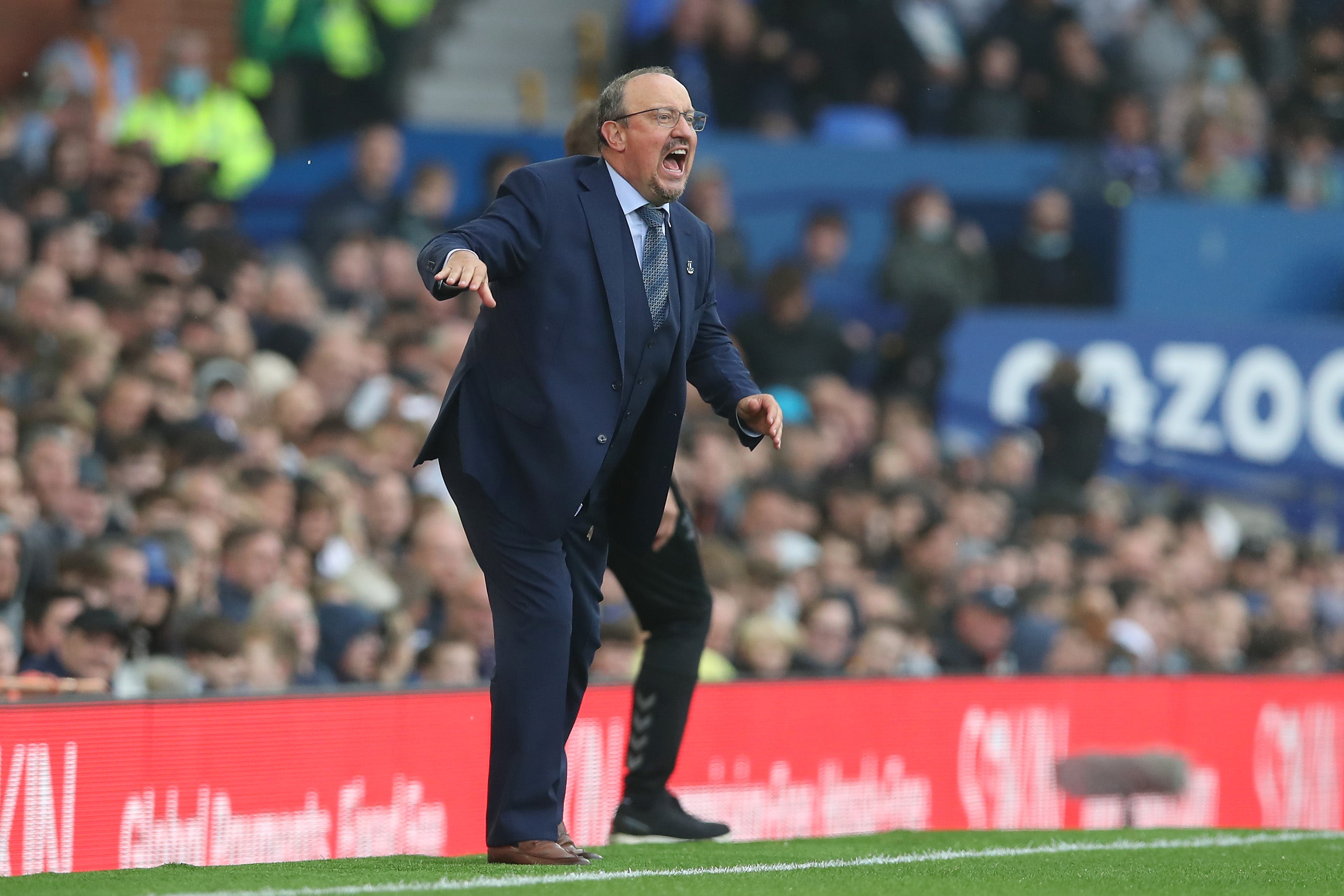 His Everton, boosted by the availability of England star Dominic Calvert-Lewin and Olympic gold-medalist Richarlison, began full of verve and intention, with debutant Demarai Gray lively.

The summer signing from Leicester sparked the move that led to the first shot of the match from Allan.

He was involved again after being fed by Seamus Coleman and fizzed in a cross that Calvert-Lewin skewed wide of the target.

A quick counter then saw Richarlison whip a dangerous ball through the six-yard area that just evaded Everton’s No 9.

The scoreline remained goalless due to impressive goalkeeping from Alex McCarthy. A short free-kick was rolled to Everton’s other new boy, Andros Townsend, on the right and he delivered a lovely cross into the area. Just as Richarlison was readying to poke home, McCarthy smothered.

The shape of the game suggested the natural consequence would be for Everton to further impose themselves and open the scoring.

But Michael Keane, unsure and uncomfortable, dithered in possession with Che Adams pressurising him. Mason Holgate slipped as the ball diverted his way, sending Adam Armstrong through. He finished emphatically into the far corner to mark his Premier League and Southampton bow, temporarily calming fears about where goals might come from after the departure of Danny Ings to Aston Villa.

Jordan Pickford saved from Armstrong again as a smattering of jeers greeted the half-time whistle.

Everton’s response was immediate after the break to even matters, quell frustration and restore the raucous atmosphere. 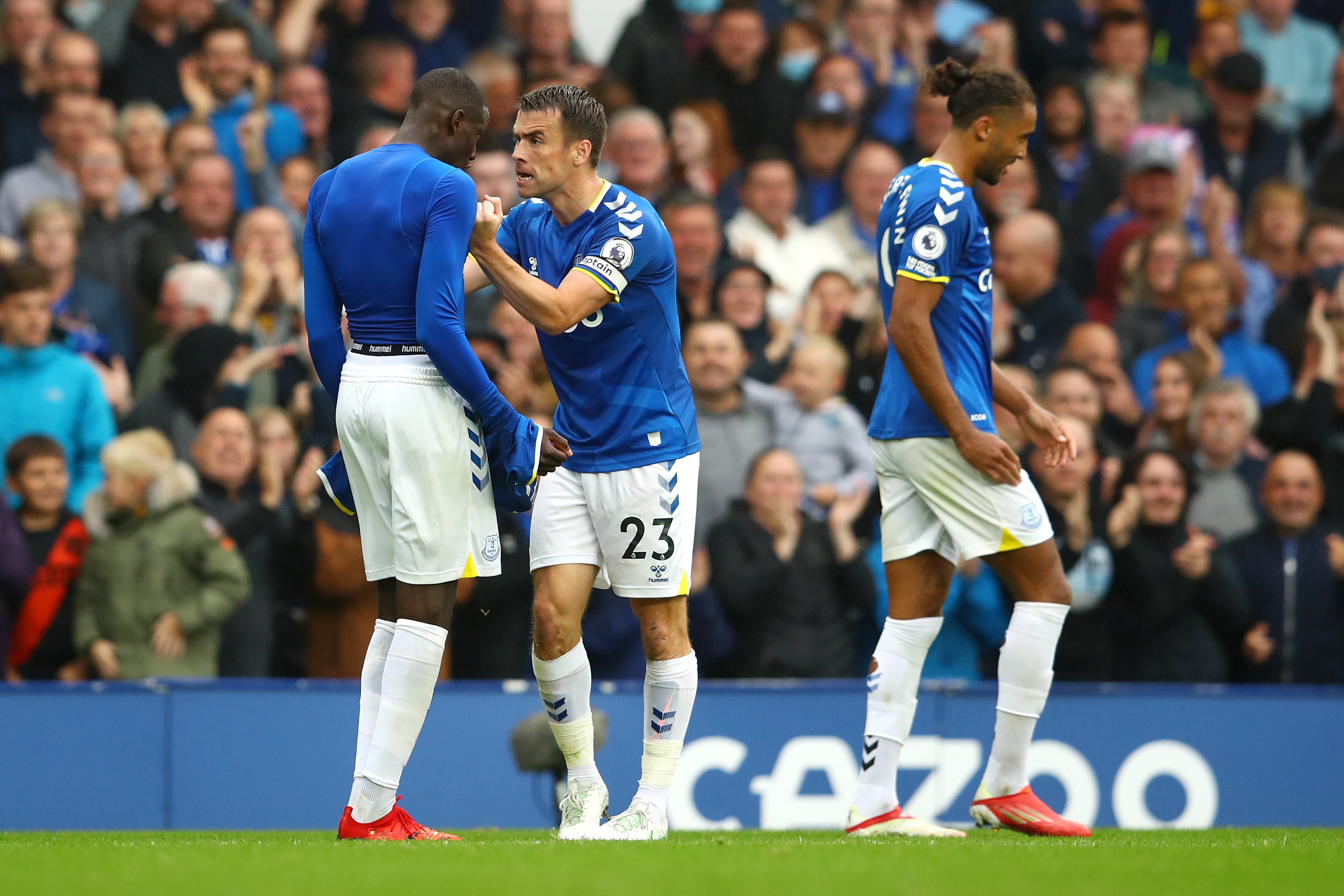 Adams cleared Lucas Digne’s initial effort, but Townsend headed the ball back in, which fell into the path of Richarlison. The Brazilian did brilliantly to flick home first time off the underside of the bar.

Everton were enlivened. McCarthy smothered a loose ball after an almighty scramble, with Calvin-Lewin trying to force it in, before Townsend supplied another great delivery that met Abdoulaye Doucoure’s head but bounced off Richarlison.

Mohammed Salisu defended well to thwart Gray and Southampton were having soak up sustained pressure, but recovered some control.

A succession of corners troubled Pickford and Everton, but they were not accompanied with a decisive edge.

That offered encouragement to the hosts, who gladly seized it. Allan took a free-kick quickly to Doucoure, who picked out Coleman on the right. The captain chipped intelligently into the area, with substitute Alex Iwobi directing the pass back to Doucoure.

The Frenchman spun superbly to stun James Ward-Prowse, before sending a beauty into the bottom corner.

Everton weren’t done. Richarlison offered a sensational cross from the right and Calvert-Lewin buried it with a low header.

The home crowd were all up, all in. The Benitez era, already riddled with Covid-related and financial issues – let alone the emotional turmoil of having him at the helm – begins in triumph and with more warmth than he could have anticipated.