Report and highlights from the Sky Bet Championship clash between Preston and Rotherham at Deepdale as a Joe Rafferty own goal and another from Ben Wiles sealed victory for the Millers to boost their survival hopes.

Rotherham climbed out of the Sky Bet Championship relegation zone with their first away win over Preston for 18 years after a battling 2-1 victory at Deepdale.

Joe Rafferty’s unfortunate own goal after just 17 seconds and a superb Ben Wiles strike did the damage.

Ched Evans pulled a goal back for Preston in the 65th minute following a goalmouth scramble, but the Lilywhites crashed to a second successive defeat.

Ryan Giles and Lewis Wing both made their first starts as the Millers looked to register back-to-back victories for the first time this season. 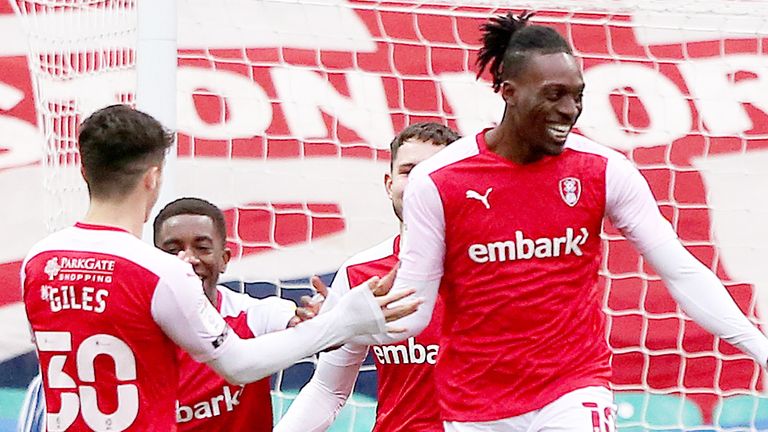 And the visitors had the perfect start when Rafferty bizarrely headed Freddie Ladapo’s shot into his own net.

Clark Robertson had a decent chance to double the advantage in the 10th minute, but his left-foot shot on the edge of the box was blocked.

At the other end, midfielder Jayson Molumby rifled wide with a wayward right-foot strike as the hosts looked to get back on level terms.

Gordon powered just over the bar as Preston pushed hard to restore parity and then, 10 minutes before half-time, Evans forced a fine save from Millers keeper Viktor Johansson. The striker’s header looked destined for the top corner, but a full-stretch Johansson palmed the effort away.

Ryan Ledson floated a delicious ball into the six-yard box, but Tom Barkhuizen somehow managed to poke straight at Johansson with the goal at his mercy.

Midfielder Ben Whiteman crashed a stinging free-kick against the left-hand post, but the ball just would not go in for the Lilywhites.

Whiteman rifled inches wide of the left-hand post immediately after the restart, but it was the Millers who opened up a two-goal cushion courtesy of Wiles’ sweet strike, his first away goal for nearly a year.

The forward was afforded too much time in the box and powered into the bottom-right corner with a thunderous effort.

Barkhuizen had a great chance to redeem himself after his earlier miss, but this time shot tamely into Johansson’s hands when he should have done much better from close range.

Evans pulled a goal back, his first goal for his new club, with a typical poacher’s finish as North End sensed a comeback.

But at the other end substitute Michael Smith was denied a goal after a solid save from Leicester loanee Daniel Iversen, playing against his former loan club.

Substitute Scott Sinclair had the ball in the back of the net with seven minutes remaining, but to rub salt into Preston’s wounds, the winger’s effort was controversially ruled out for offside as they missed out on a point.