Who misses out on a tough run-in and who is cursing their luck if the Premier League’s final nine games are scrapped?

Most pundits, managers and players who have spoken publicly since the coronavirus outbreak have said they want to see this season finished above all else, with some 288 of the 380 Premier League games of 2019/20 already completed – and Liverpool within touching distance of lifting the trophy for the first time.

On Friday, they reiterated that approach and said the aim remains to restart the 19/20 season when it is safe to do so.

UEFA president Aleksander Ceferin admitted last week the European season would “probably be lost” if the pandemic has not cleared up sufficiently by the end of June for domestic leagues to restart – although he has since said this would be a “last resort”.

Should it come to that, it leaves Premier League bosses with a conundrum – how is the season settled? There has been talk of a larger Bundesliga planned for in Germany next season, with none of this season’s teams relegated but those in the promotion spots in Bundesliga II included in a one-off bumper top flight campaign.

One outcome which has been raised as a possibility, if completing this season’s fixtures proves to be too difficult even if rushed through during the summer, is that of playing only two outstanding games – Manchester City vs Arsenal and Aston Villa vs Sheffield United.

That would leave every team having played 29 games, and could then be used to decide the title, European spots, relegation and position-based prize money. Something similar has already been planned in Belgium, subject to approval.

But with each team’s nine remaining games different to any other side in the division, naturally some will be more pleased and some frustrated if this comes to pass. For 13th-placed Newcastle, it might be a hindrance – they still have five of the bottom six to play. Whereas 11th Crystal Palace, who are due to come up against every top-six side except Manchester City by the end of the season, may breathe a sigh of relief.

The title may be all but decided – so we’ll leave that out of the equation – but the race for the Champions League still looks like it would have plenty of twists and turns in it should the season play out to its conclusion. So what do the run-ins say about the chances of the runners and riders?

As it stands, pending Manchester City’s appeal against their two-season Champions League ban, the top five teams in the Premier League, bar City, will qualify for next season’s Champions League. At the moment, that means Manchester United in fifth would join Chelsea, Leicester and Liverpool in the competition.

But with only six points separating United from even 11th-placed Crystal Palace, there would be plenty to play for in the last nine games of the campaign.

In third and fourth, Leicester and Chelsea’s average opponent position is relatively low (11.0 and 11.3 respectively) but the Blues still have three of the top six left to play, while Brendan Rodgers’ men have only a final-day showdown with Manchester United in the schedule.

United themselves would be confident of returning to Europe’s premier continental competition – they are due to play only one of their top-six rivals in the rest of the season, and the average position of their remaining opponents is the lowest of any team in the Premier League this season, at 12.3.

That said, they have the fifth-worst record per game against the bottom half of the table, so perhaps Ole Gunnar Solskjaer would prefer it the other way around.

All three of sixth-placed Wolves’ next three scheduled games come against teams in the bottom six, while they too only face one top-six rival – Chelsea – in their last nine games. The run-in looks toughest for Sheffield United. Even though the Blades could move fifth if they were to win their game in hand against Aston Villa, they face what is on paper the hardest end to the season of any side in the top 10 with an average opponent position of 9.4 and Wolves, Chelsea, Leicester and Manchester United still to play – Villa are their only bottom-six foe.

Only Arsenal in ninth have as many top-six opposition left to play before the season is out, but they also face four of the bottom six.

Of the six teams who will realistically feel they are still in a relegation battle – thanks to Southampton’s five-point cushion to 15th-placed Brighton, most have a fairly tough schedule of games still on the horizon, with bottom side Norwich, the only side with fewer than three of the top six left to play.

For Bournemouth, hovering inside the bottom three only on goal difference from Watford and West Ham, the run-in looks particularly bleak; they have the highest ranking average opponent (8.2) of any side in the division, and play four of the top six but none of their relegation rivals. 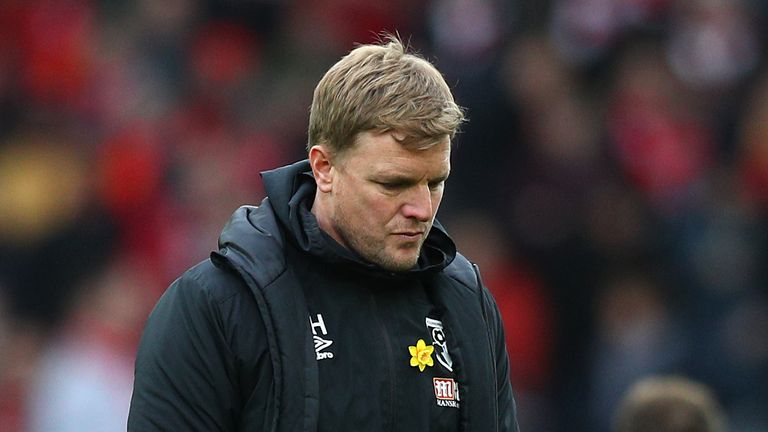 Things are little better for 19th-placed Villa, who admittedly could rise to 16th should they win their game in hand over Sheffield United, but have four of the top six left to play, and only West Ham – on the final day – from the teams around them.