Phillips earns his place at Liverpool

Nat Phillips might never have got his chance at Liverpool had it not been for their injury crisis season. When Virgil van Dijk, Joe Gomez and the rest finally return to fitness, he is likely to find himself dropping down Jurgen Klopp’s centre-back pecking order again.

But at the very least he has shown he has a future in this Liverpool squad. The 24-year-old has been a towering influence in their late-season resurgence and his performance against Burnley, capped with his first goal for the club, was surely his best yet.

The goal, powered home from Sadio Mane’s cross soon after half-time at Turf Moor, underlined his aerial threat in the opposition box but it was in his own that he was most impressive.

Burnley threw everything at Liverpool but Phillips was always there, putting his body on the line repeatedly, showing his usual steeliness under pressure and helping the 20-year-old Rhys Williams through the game alongside him. His leadership shone through. Nobody made more tackles, clearances or blocks.

“I think even if a double decker bus had come in the box, Nat Phillips would have headed it away,” said Sky Sports pundit Jamie Carragher as he named him man of the match.

“I’ve been a huge fan since he’s come into this team. If Liverpool do eventually cement that Champions League place on Sunday, he will be one of the big reasons why.”

The plaudits are well deserved. Phillips has earned his place at Liverpool and he looks in no mood to give it up.
Nick Wright

In a week where talk of Harry Kane leaving Spurs has ramped up, the general feeling around the Tottenham Hotspur Stadium was not one of anger towards ‘one of their own’ wanting out. There is an understanding among fans that if Kane is to have a trophy cabinet to match his goals, it will not be with Spurs.

The defeat by Villa summed up their season. A short show of electric attacking quality early on – which they do possess in abundance – followed by large periods of turgid, unintelligent play. Villa, out of form, won away for the first time when conceding first in 53 away games, a run going back to 2013. They thoroughly deserved their three points.

If Kane is to jump this ship, history is on his side. A staggering 87 players have left the club and then gone on to win a trophy since 2008, the last time Spurs themselves won silverware.

The club and Daniel Levy are now in a bizarre situation where there is no out-and-out favourite, or even obvious fit, to take over as manager. Perhaps they need another project, in the mould of Mauricio Pochettino, but would Kane be patient enough to wait for the success? Or maybe they need a proven winner, in the mould of… well, you can see where I am going with this.

This is Spurs’ sliding doors moment, their biggest-ever summer off the pitch.
Gerard Brand

With Gareth Southgate watching from the stands, Michael Keane put in a performance of real note at the heart of the Everton defence against Wolves. He looks to have fallen behind Conor Coady in the England pecking order but that looks a strange decision on this showing. Coady kept Calvert-Lewin relatively quiet but his lack of pace on the turn was exposed at various points – an area Keane does not lack in. Southgate is due to pick his 26-man squad on Tuesday for the European Championships and the extra places from the norm may work in Keane’s favour.

The England boss has a good relationship with Eric Dier but his form has nosedived for Tottenham this season while Keane has been rock solid as part of the Everton back three – as shown on Wednesday, in a man-of-the-match display.

Against Wolves, the Toffees defender made a match-high eight clearances as Fabio Silva was completely marked out of the game. Adama Traore was Wolves’ only real hope of breaking through but a storming tackle on him down the right flank in the second half from Keane triggered one of the biggest cheers of the day. An immaculate display. One Southgate will have surely made a note of.
Lewis Jones

“Overall, we have earned it this year, but we have a bit to do yet and hopefully we can get over the line,” David Moyes told Sky Sports after West Ham secured a 3-1 victory at West Brom to close in on Europa League qualification.

But, after Spurs’ defeat earlier in the day gave the Hammers a golden opportunity, they were made to do it the hard way by a battling West Brom side, who were playing for nothing but pride after their relegation was already confirmed a couple of games ago.

Losing Lukasz Fabianski in the warm-up, Declan Rice missing a penalty in the opening minutes and going a goal behind after Matheus Pereira’s corner found its way past Darren Randolph after taking a touch off Tomas Soucek – many a team could and would have folded under the pressure.

But West Ham showed their resilience and their fighting spirit as they battled their way back into contention with goals from Soucek, Angelo Ogbonna and Michail Antonio securing a vital win.

It all means Moyes’ side need just a point from their final game of the season against Southampton at the London Stadium.

When asked about how securing Europa League football sounds, Moyes added: “It sounds great. I am quite calm about it because I know we have to still go and earn it.”

With the West Ham fans back on Sunday, roaring on their time for one final push, it promises to be quite an occasion.
Oliver Yew

Arsenal will need more on Sunday

The race for the European places could not be tighter. Arsenal’s late showing against Crystal Palace means they are still within touching distance of a potential top-seven finish, but they will need to be much improved against Brighton on Sunday.

As they came out for the second half, it was almost like they were content with slowing down a feisty game in the first half and protecting their precarious 1-0 lead. On both counts, they failed.

Crystal Palace soon began to find their gear, roared on by the returning Selhurst Park crowd, and equalised through Christian Benteke. Even then, Arsenal were on the back foot and it took a scrambled goal from two substitutes to edge them ahead.

Gabriel Martinelli turned home Martin Odegaard’s cross before Pepe scored his second of the evening to round off the victory, but the scoreline flattered Arsenal.

“We conceded the goal and after that we just lost it,” Arsenal manager Mikel Arteta said after the game. “We started to give balls away, we didn’t look composed at the back during our build-up and we looked uncertain.

“When that happens, long balls, second balls, duels, 50/50 balls, they are much better at that than us, so I think after the changes we got that control back much better, we were more composed, we played in the final third without creating much I must say, but at the end with two great actions we managed to win the game.”

Arteta also urged his side to deliver in what could be a pivotal Sunday. Arsenal can now only secure a place in the Europa Conference League, but even that will take a bit of good fortune and most importantly, an improved performance.

The Gunners boss has an almighty summer ahead to make Arsenal competitive again, and a win at Brighton can be the springboard for such plans.
Charlotte Marsh

Willock has been a revelation at Newcastle

When Joe Willock scored Newcastle’s late equaliser against Tottenham, the main focus was on hauling the team away from the relegation zone after their horror show against Brighton before the international break. What has happened since has been simply astonishing.

Willock followed up with a late winner against West Ham and a stoppage-time equaliser against Liverpool. This latest winning goal against Sheffield United on the night that supporters returned to St James’ Park extends his scoring run to six consecutive matches – making history in the process.

The 21-year-old midfielder is the youngest man to achieve that feat in the Premier League and only the third Newcastle player ever to do it – following in the footsteps of Alan Shearer and Papiss Cisse. Nobody in the competition has scored more goals since the run started against Spurs. 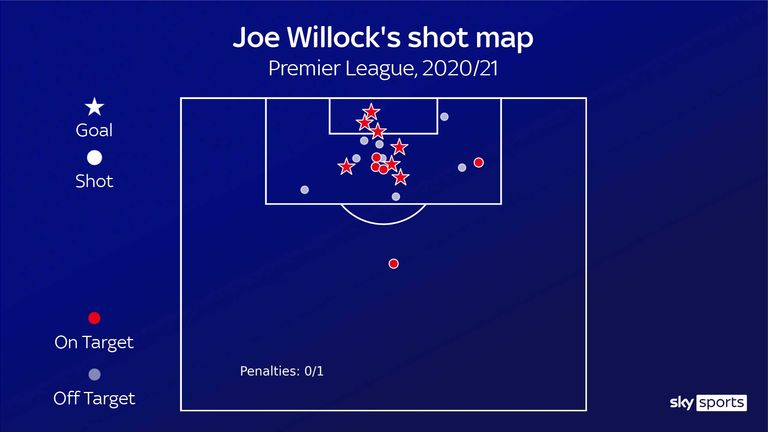 The fans on Tyneside left the youngster in no doubt as to their feelings – singing of their desire for him to stay. But so good has Willock been of late that the chances of that happening might be going down rather than up, as manager Steve Bruce acknowledged afterwards.

“It is a double-edged sword isn’t it? We have to respect that he is Arsenal’s player,” Bruce told Sky Sports. “He is only 21 years old. If we can, we would love to bring him here. Of course, we would. He has had a wonderful three months. Let’s see what we can do.

“He is exactly what we needed and we wanted at a time when we needed somebody who could get a chance and arrive from midfield. Joe has got that in abundance.

“He has still got a lot to learn, don’t get me wrong, especially when people run off him. But we have given him a freedom and a licence to get forward. When he plays as he did, he is a young lad enjoying his football, which was very pleasing. He has been a great signing.”
Adam Bate 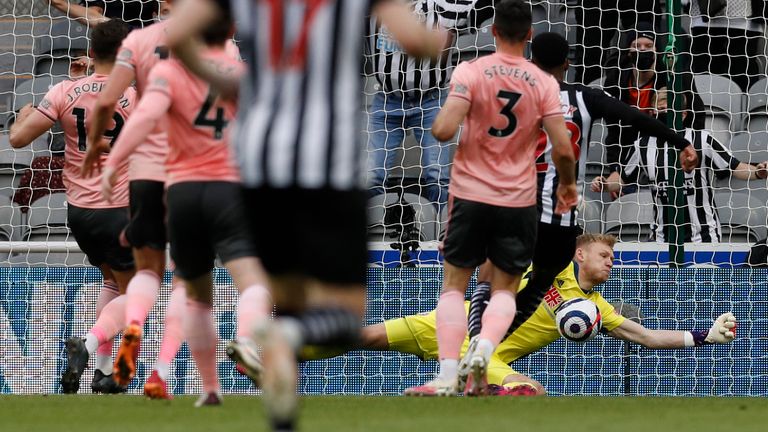 Sheffield United’s end-of-season awards will not be contested like the last – picking a single player felt futile then – but amid the debris of a dreadful campaign, Aaron Ramsdale’s resilience will certainly be worthy of recognition.

Following Dean Henderson, so agile and confident, in the Sheffield United goal was an unenviable task and yet early scrutiny on the young goalkeeper felt too often misguided.

There were nervous moments and poor decisions, confidence sapped as he struggled to stem the tide, but in a season that long felt doomed, he was left far more vulnerable than his predecessor behind a decimated defence and increasingly passive midfield.

And so Ramsdale’s display of mental fortitude has offered light amid the gloom.

“I lost a little bit of belief in myself. People’s criticisms, you have to take with a pinch of salt, but when it is unjustified it’s harder to do that.

“But we have continued to work hard. I have been believing in myself a little bit more, not worrying about the outside noise as much anymore.” 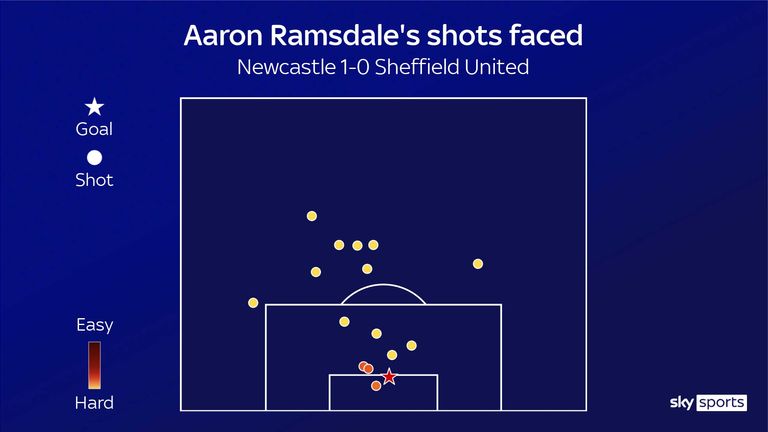 “I remember a point-blank save against West Brom at 1-1 and we won that game; I think from that moment he’s been excellent and got better and better,” said interim boss Paul Heckingbottom after seeing the England international impress again despite Wednesday’s narrow defeat to Newcastle.

“He is and is going to be a top goalkeeper.”

When heads have dropped and legs looked leaden in front of him, Ramsdale has held his nerve. There have been key saves against Brighton, Crystal Palace and Everton in recent weeks and against Newcastle there were more: a point-blank stop to deny Jonjo Shelvey, a big hand to thwart Joe Willock.

The Blades’ fate might have long been sealed but Ramsdale is finally repaying his own faith; his re-emergence should act as inspiration for his team-mates as a summer rebuild of mind as well as matter looms.
Kate Burlaga