From Pizza-gate to Patrick Vieira and Roy Keane clashing in the tunnel (and who can forget Martin Keown vs Ruud Van Nistelrooy?)… the golden era of Manchester United against Arsenal is STILL the greatest Premier League rivalry ever

Sir Alex Ferguson recognised instantly the threat of Arsene Wenger’s Arsenal. ‘He’s a novice. He should keep his opinions to Japanese football,’ he scorned as soon as the Frenchman arrived in 1996-97.

Of course, Ferguson only went for people he regarded as serious rivals. He was proved right on that count over the next tumultuous eight years.

That incredible period up to 2005 took in United’s Treble and Arsenal’s Invincibles. The intensity of feeling between any two clubs was unmatched, before or since. 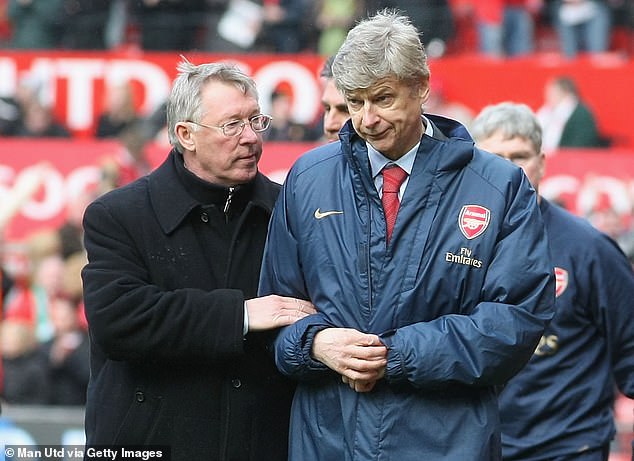 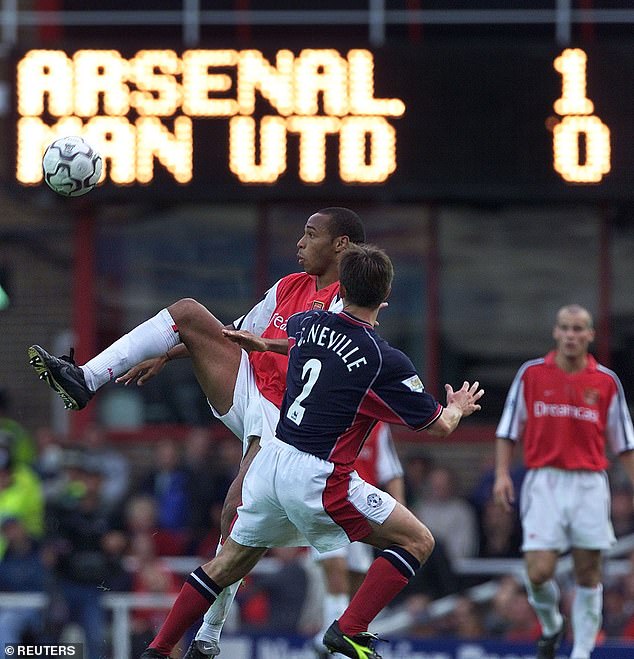 There was Pizzagate, Vieira-Keane in the tunnel, Keown-Van Nistelrooy on the pitch. Some of the epic matches will live on for years. Arsenal twice influencing the title race at Old Trafford. United winning the 1999 FA Cup semi-final with a breathtaking Golden Goal from Ryan Giggs. United ending Arsenal’s record 49-game unbeaten run.

‘The Gaffer loved a challenge,’ explained Ferguson’s one-time assistant Steve McClaren about the all-consuming rivalry. ‘He had to have somebody to fight and complain about. Arsenal. Arsenal. Wenger!’

October 1996 was the date everything changed. Arsenal appointed a largely unknown bespectacled Frenchman as their new manager at a time when Ferguson’s star had never been higher, a Double winner with a new team based around the Class of 92.

Nobody else in the Premier League thought they could compete with United. But Wenger did. He signed Patrick Vieira and Nicolas Anelka, made the famous Arsenal back-four eat and train better, and dismantled George Graham’s long ball game for athleticism and skill.

Most startlingly, he used the media to take on Ferguson’s power. Nobody had treated the United manager like this before and the stage was set for an epic head-to-head between the two clubs.

In Wenger’s first full season of 1997-98, Arsenal ended United’s run of two titles in a row, the key victory taking place at the Theatre of Dreams, Marc Overmars scoring the winning goal. 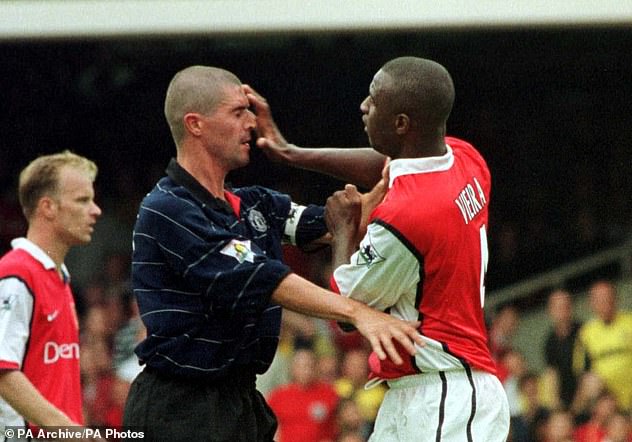 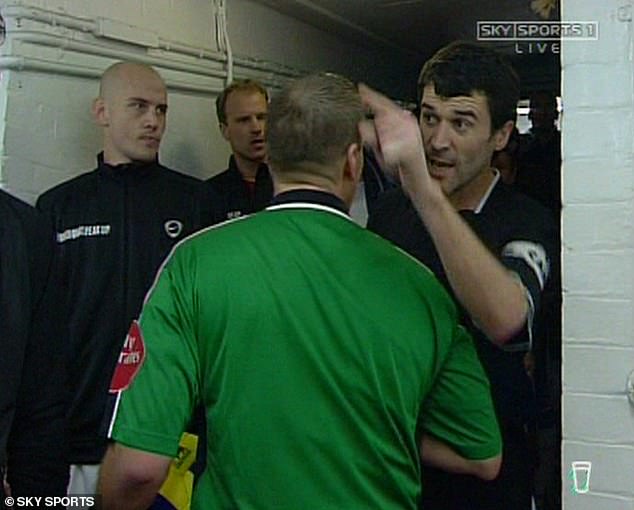 United bounced back the following season to win the Premier League, FA Cup and Champions League. But they only finished the season a point ahead of Arsenal. The 1999 FA Cup semi-final saw Roy Keane sent off and Dennis Bergkamp miss a penalty before United won 2-1, Giggs celebrating his winner by ripping off his shirt and swirling it over his head.

‘The best game I’ve ever played in,’ said Gary Neville, reflecting on his long career.

A new century saw the rivalry spill over. Arsenal won the title again in 2002, becoming champions with a win at Old Trafford. ‘He never comes for a drink with the opposing manager. It is a tradition here,’ churned Ferguson after watching the Gunners players celebrate wildly on his turf.

September 2003 saw the animosity cranked up a notch. Ruud van Nistelrooy missed a last-minute penalty that would’ve given United victory and Arsenal players surrounded the Dutchman to gloat and physically barge him. 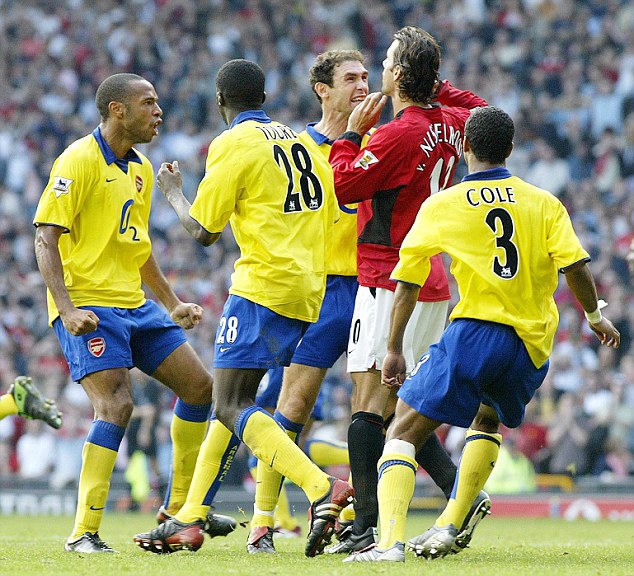 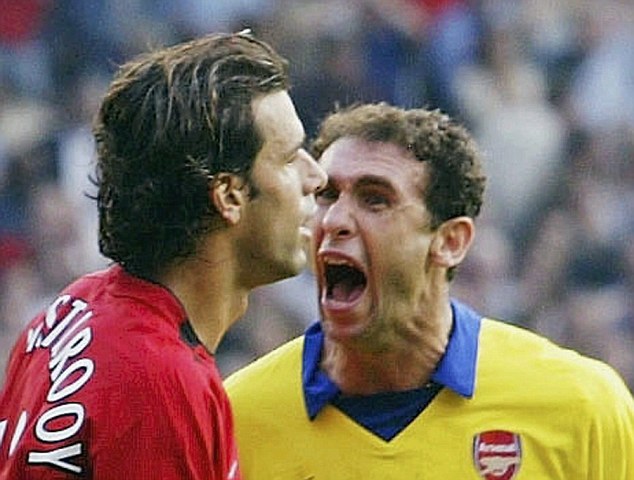 It became known as the Battle of Old Trafford. Martin Keown was fined £5,000 for pushing van Nistelrooy in the face as the Arsenal’s defender excuse – ‘Ruud was standing on my foot so I just pushed him away with my hand in an attempt to free myself’ – was laughed out of court.

The tough defender later admitted even his wife thought he’d gone too far with his behaviour. ‘We just spontaneously reacted. It was fever pitch out there,’ he acknowledges now.

The penalty miss proved doubly significant as Arsenal were able to go on and complete the league season unbeaten, a historic achievement. 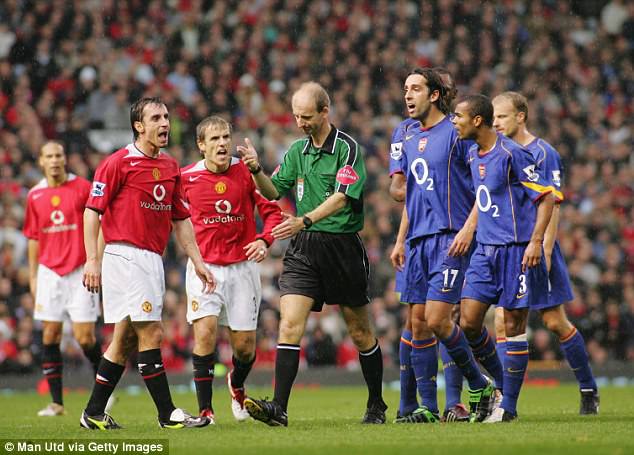 United ended Arsenal’s unbeaten run in 2004. Arsenal teenage substitute Cesc Fabregas (not pictured) threw a slice of pizza as tempers boiled over in the tunnel, and hit Ferguson

United exacted revenge on home soil by ending Arsenal’s unbeaten run in 2004. In the aftermath, Arsenal’s teenage substitute Cesc Fabregas threw a slice of pizza as tempers boiled over in the tunnel, and hit Ferguson.

‘I started hearing shouts and saw Rio Ferdinand all the big boys, Thierry and Sol Campbell, getting into a fight,’ he later revealed.

‘I just didn’t know what to do as I was so small and skinny. To be honest I didn’t aim at anyone, but Man United were on one side so I just did it (threw the pizza).’

The following February came the legendary tunnel bust-up between Keane and Vieira, this time taking place before the game.

Arsenal were unhappy about the physical treatment their Spanish player Jose Antonio Reyes received from United and Vieira strode over to make his point to Gary Neville as the teams lined up ready to walk out at Highbury. 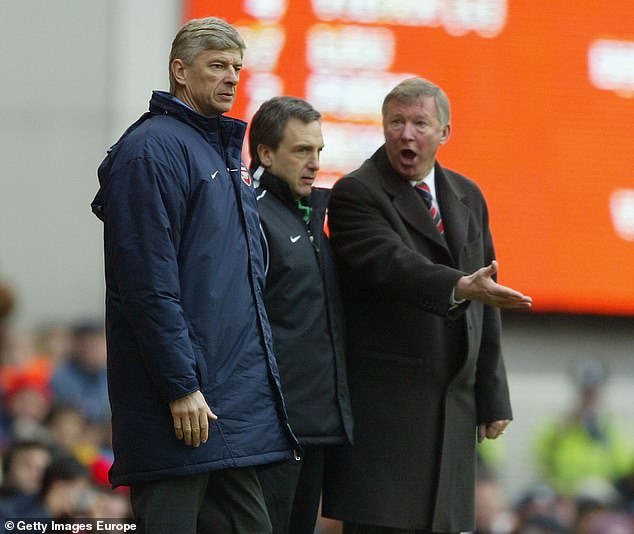 Keane spotted it and had to be dragged away from the Arsenal skipper before going in again and jabbing his finger and yelling menacingly: ‘See you out there’.

As Keane was blocked off by match officials, he helpfully explained: ‘He should shut his f***ing mouth up.’ Vieira looked shaken enough for Bergkamp to put an arm around the shoulder and ask if he was alright.

It was all picked up by the television cameras at the time and the two combatants reunited in 2013 to make a documentary: Best of Enemies.

‘What really annoyed me was that you were picking on Gary, almost picking on the weakest link. That’s what got my back up,’ Keane told his nemesis all those years later.

Part of the beauty of the rivalry between United and Arsenal was that both clubs had players with fire in their bellies, and not just the usual suspects. 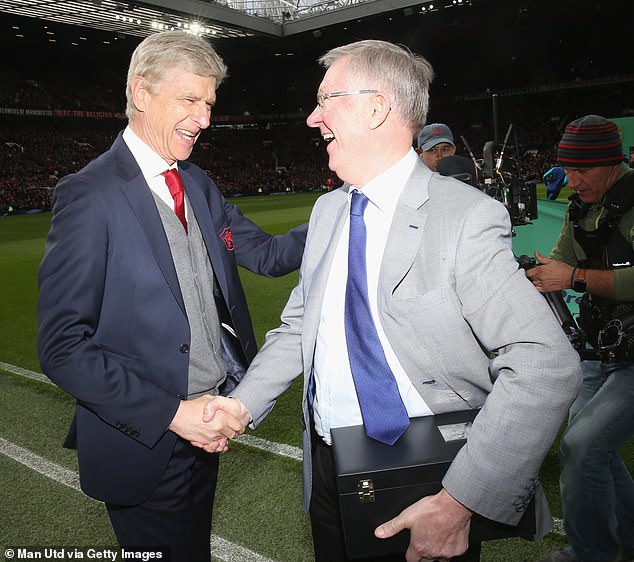 Once Wenger stopped becoming a threat on the pitch, Ferguson’s personal relationship with him started to improve – Ferguson presented Wenger with a gift to mark his retirement in 2018

There were the obvious hard-nuts, Keown, Keane, Van Nistelrooy, but others too with fires in their bellies. Paul Scholes for one remembers the team-talks before games against Arsenal. ‘The ball was hardly ever mentioned.’

Wenger and Ferguson both produced exceptional football teams who refused to take a backward step. ‘Ferguson does what he wants and everyone is down at his feet,’ fumed Arsenal’s boss.

The final chapter of the great rivalry really took place in the 2005 FA Cup Final when Arsenal, missing Thierry Henry, were uncharacteristically defensive and nicked the trophy on penalties after a goalless draw.

Vieira lifted the trophy in his final match for T=the Gunners before joining for Juventus. Arsenal had a new stadium to play for and the brain drain of talent meant they were no longer able to compete at the top table.

Funnily enough, once Wenger stopped becoming a threat on the pitch, Ferguson’s personal relationship with him started to improve, and the peak of the club rivalry was over.

There has never been a Premier League stand-off like United and Arsenal during that period however. One must hope when football resumes, Liverpool and Manchester City can continue their excellence to give this generation a rivalry to get truly excited about.