Premier League chief executive Richard Masters does not expect the Premier League to increase the amount of substitutions that can be made during a game.

Jurgen Klopp and Pep Guardiola have led the calls for the Premier League to reintroduce five substitutes this season in a bid to curb a spate of injuries.

Masters, giving evidence at a Digital, Culture, Media and Sport Committee, revealed clubs had voted against it twice already and does not expect it to be changed from three any time soon. 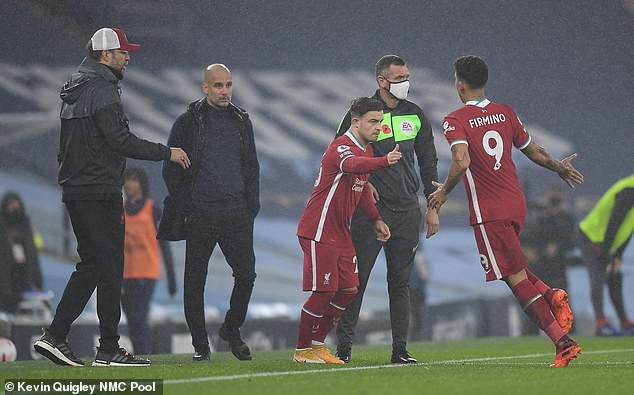 ‘We have had two votes on it at club level and both have been relatively supportive of three subs,’ he said.

‘That has created some frustration, alongside discussions of fixture scheduling, which is related to the pandemic. There is a real issue and I don’t foresee it changing in the foreseeable future. It has been voted on twice.’

The five-substitute rule was brought in for Project Restart amid the coronavirus pandemic for player welfare but clubs voted in favour of reverting back to three changes ahead of the 2020-21 campaign.

Both Liverpool boss Klopp and Manchester City manager Guardiola have been vocal in their support for returning to five subs, railing against Premier League bosses over a ‘lack of leadership’.

Klopp has felt the impact of a jam-packed schedule this season with multiple stars sidelined through injury. Liverpool right back Trent Alexander-Arnold joined Reds team-mates Virgil van Dijk and Fabinho on the treatment table at the weekend.

‘We have to talk again,’ he said. ‘You go in a meeting with all the different teams and Richard Masters says “what do we think, do you want five or three subs?”

‘Richard Masters sold it completely wrong, is my understanding. It’s the only big league with only three subs. Big surprise! It’s a lack of leadership… If 14 teams do not agree that five subs should happen then at least let the top six sub five times when we play each other.

‘Ole was right. Everyone needs to get round a table. Sky, BT, BBC, whoever. They have to talk. You cannot keep the players fit.’

Guardiola added: ‘This league likes to be different. I don’t understand how the Premier League understand the situation.’

After Manchester City’s 1-1 draw against Liverpool on Sunday, Guardiola said of a post-match conversation with Klopp: ‘We didn’t speak about the result. We spoke about how we need to fight again and again for five substitutions.

‘Look, an international England player, Trent Alexander-Arnold, he’s injured. All around the world, there are five substitutions.

‘But here we believe we are more special people and [use] just three players. We don’t protect the players.

‘That’s why it’s a disaster with this calendar. I will demand, if the people allow my voice, to come back with five substitutions.

‘It will help the players, the managers and everywhere to do it. If not it’s difficult to sustain it.’