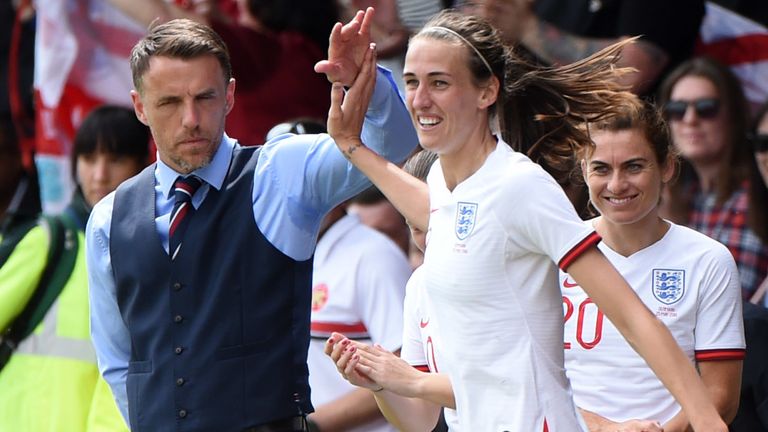 Jill Scott has told Sky Sports News that it will be “sad to see” Phil Neville leave his role as England Women’s head coach, as she praised the impact he has had on her career.

It was announced last week that Neville will not be renewing his contract with the Football Association and will step down when his current deal expires in July 2021.

33-year-old Scott has been an important member of his team since he took charge in 2018, and was part of the squad that reached the Women’s World Cup semi-finals last year.

Speaking to former England team-mate Sue Smith about Neville’s impact since taking the job, she said: “I think he’s had a really positive one.

“He understands being an older player. For me, he’s been really good at managing my training and still giving me confidence that I’ve still got a few more years left. “When you get a bit older, people want to talk about retirement and stuff like that, but he’s always saying to us, ‘come on Jill, two more years’.

“He’s had a really good, positive impact on me and it will be sad to see him go. But hopefully he’ll be moving on to a new role and we’ll wish him all the best.”

Like most other sportspeople, Scott is currently spending her time at home, waiting to hear when she can return to action.

The Manchester City midfielder last played for her club in their 3-3 draw with title rivals Chelsea in the Women’s Super League on February 23, and she is hopeful the competition can be completed.

“I hope that we can get the season finished off,” she said. “I feel like it’s been a successful one so far.

“We had that exciting game with Chelsea just before lockdown. But I think the bigger picture, the safety of everybody… we’re just going to have to see what happens.”

Having not played in more than two months, Scott admits she has needed something other than football to occupy her time – which is where her passion for poetry has come in.