A Foden versus Sterling debate is brewing at Manchester City, and will follow this summer for England. Who will get the nod in Gareth Southgate’s line-up?

Raheem Sterling has long been one of Pep Guardiola’s main men at the Etihad, finishing as their top scorer in both the Premier League and all competitions last season, seven ahead of his nearest rival Sergio Aguero.

The steps the 26-year-old has taken to shake off the £50m price tag which took him to Manchester nearly six years ago have been impressive, scoring 55 league goals across his last three full seasons and even reigniting a stuttering England career where he had fast become an easy scapegoat.

But just as Sterling’s initial rise to the big time, back at former club Liverpool, saw him move past established figures to cement a place at Anfield, a youngster of young Phil Foden’s talent was only going to remain a bit-part player for so long.

Both started the Carabao Cup final on Sunday, with the apprentice outshining his elder rival and finding himself a post’s width away from opening the scoring before half-time. But since the start of March, that is only the second time the pair have been named together on a Manchester City team-sheet across 13 games.

That’s fewer than the three times they have lined up alongside each other in the 11 England matches since Foden’s debut last September, but when the European Championships roll around in June and Southgate has a fully-fit squad to pick from, who will get the nod?

Could they play together?

The first question is whether this is even a debate, as Sterling and Foden have shown they can start together for England in recent matches. But each of those three games came during a period where Marcus Rashford, a Southgate regular, was unavailable and out of the squad altogether.

Rashford has started four of the last six games where he has been available, scoring four goals in that time. Jadon Sancho, overlooked by Southgate for the most recent round of games, had also been a regular prior to the coronavirus pandemic.

Mason Mount provides another threat, having started all of England’s eight most recent games, although he will likely be deployed in a deeper role. But the point remains the same – competition in the England attack is as fierce as it has been for some time. 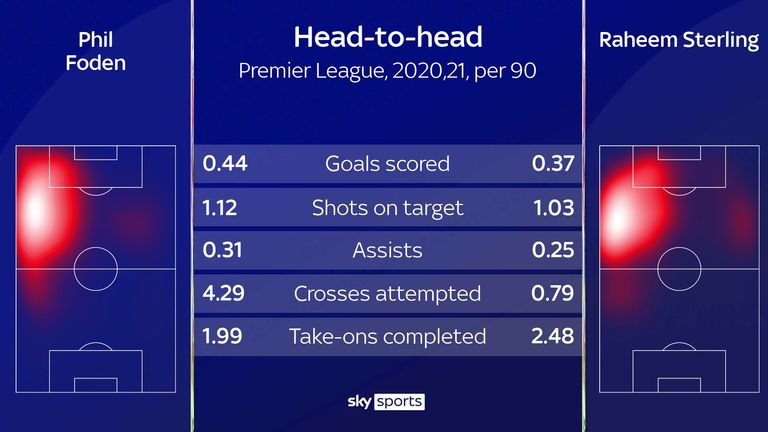 “He’s almost up against his mate, Raheem Sterling, and he’s got to pick one of them,” Jamie Redknapp told Sky Sports following another enlightening performance from Foden in last week’s win over Aston Villa.

“Kane is a certainty, but if you’re going to play him on that side, Sterling at the moment, something is going on. He’s in and out of the team, he seems to have fallen out with Pep, but Foden certainly hasn’t.

“I know he hasn’t played as many games, but he’s always involved.”

Plenty has been said about the reasons behind Sterling’s lack of consistent game time for Manchester City in recent months – but whatever the reason, five starts in 12 matches does not make for great reading with regards to his England hopes.

Neither does his goal return, which has dried up since mid-February. He has scored 13 times for his club this season but since notching against Swansea in the FA Cup on February 10, has managed to find the back of the net only once in 13 appearances.

The same cannot be said of Foden, who scored the winner in both legs of City’s Champions League quarter-final with Borussia Dortmund earlier this month, and another to start a turnaround win against Aston Villa last week.

None of that is going to be lost on a manager as demanding as Guardiola, who has not ducked away from explaining his decisions.

“Raheem is an extraordinary player – he was, is and will be,” he told reporters ahead of the Carabao Cup final. “The reason why he has not played as regularly as in previous seasons is because Phil (Foden) and Riyad (Mahrez) are in top, top form. That is the only reason.

“But opportunities are going to come and he has to be ready to show his quality, freshness in his mind and to play with the incredible strength he has.”

As Guardiola also added recently: “Phil can play in five positions, Raheem can play in three.” There are a lot of similarities between the technical ability of Foden and Sterling, their awareness and work rate.

But aside from any statistical breakdown, raw pace has one of Sterling’s greatest assets, as shown by the manner of his breakaway goal in England’s 3-2 win in Spain back in 2018.

England had only 27 per cent possession that night, and only five shots. But who else out of the Three Lions’ attacking options could have scored a goal like Sterling’s opener on the break?

Foden does not quite have that same electric pace – but there’s a reason he’s been given the nickname the Stockport Iniesta. With the ball at his feet, there are already few players in the Premier League able to match his technical ability in both his passing and dribbling. As well as scoring 14 goals this season, he has already chipped in with nine assists to boot.

I have got excited by young talents before but this kid is the real deal. For a young player to play with so much flair and aggression; he’s incredible,” said Redknapp after Foden’s standout performance against Aston Villa last week.

“Sometimes you worry when kids get too much, too early, are they going to lose that hunger and desire but if that kid keeps accelerating at this rate, anything is possible. He’s frightening.

“He is effective, he gets into the box, he gets into danger areas. He is so versatile and that is what makes him such a beautiful player to watch.”

If England are finally looking to get on the front foot in big games, and cast aside a criticism which has been levelled at them under Southgate’s tenure, Foden looks likely to play a significant role.

Speaking about the midfielder earlier this season on his podcast, Gary Neville said: “I look at England’s midfield players, the options they’ve got with (James) Maddison and (Jack) Grealish and Foden. You think to yourself in that last World Cup, where England really struggled to carry the ball in midfield and transfer it through the thirds, they were okay at times – but you just wondered with that midfield, how it would connect to the front.

“I look at it now with players you can really accept the ball on the back foot and half turn and really look like they can beat people with a ball at their feet. I like it, I like that I like the players that are emerging.”

“Southgate has always been very loyal to Raheem Sterling. I remember whilst the debates raged in public during the World Cup in Russia about whether it should be Rashford or Sterling who started matches, the England boss almost always went with Sterling.

“He believes the Manchester City winger makes the sort of runs that no other player does, and so his loyalty and instinct is very strong towards Sterling.

“However, he has also promised to select players (for the squad and the starting 11) who are in the best form for their clubs, and to that end Foden has forged ahead of his club mate.

“For me, the last round of World Cup Qualifiers was key – Foden came of age in an England shirt, and played in all three matches. If it’s to be one or the other in the starting XI, right now you’d have to say Foden is favourite.

“But don’t overlook the possibility that Southgate might have both of them in the line-up – as he did in England’s last two matches, against Albania and Poland.”

Sky Bet have refreshed their market to incorporate the 26-man squad rule change. Which players are being backed to make it? Sky Bet have also said any bets already placed on their previous 23-man squad market will stand.