Ollie Watkins is the latest Premier League star to join Laura Woods and Bayo Akinfenwa on the Super 6 Podcast.

Watkins signed for Aston Villa from Brentford in September last year, and has enjoyed a successful first season in the Premier League. The England international has found the net 13 times with Villa since a big-money move from Brentford. 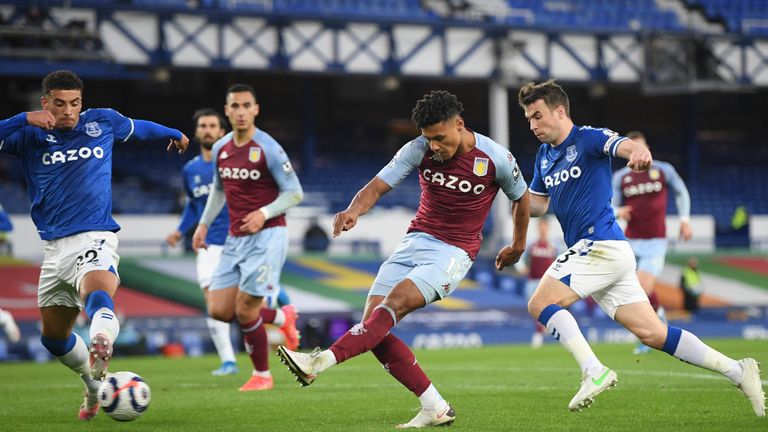 Sitting down with Woods and Akinfenwa in the latest Super 6 Podcast, the 25-year-old discusses an enjoyable 2020/21, from his debut goal with England to the perfect hat-trick against then-champions Liverpool…

Villa was the right move

Watkins made the move to Villa at the start of this campaign, but were there any other clubs who were interested in the frontman?

“I had big decisions to make, but in the end, I felt like I made the right one. The gaffer was a huge part in bringing me to Villa. I had worked with him and had such a close relationship with him at Brentford. Some of the lads used to say, ‘your dad wants you,’ if he was in the office – he was the man!”

England thumped San Marino 5-0 in the World Cup Qualifiers back in March, with Watkins entering the field after 63 minutes. It only took him 20 minutes to grab a debut goal, but the striker recalls the moment and the nerves associated with it.

He said: “I thought when I was going on, ‘please, I just want one opportunity’. I think the first 10 to 15 minutes, I was looking for the ball and nobody was passing to me.

“I was dropping in to the halfway line, I just wanted a touch, just a little set, but nothing. I thought I was going to get an opportunity – just keep staying around the box.

Only three games into Villa’s campaign, they faced Premier League champions Liverpool, and dispatched them by a historic 7-2 thrashing. Watkins was among the scorers, netting three times for the perfect hat-trick.

“It was more when I got home,” he recalled. “I just walked through the front door with the hat-trick ball and my washbag – I was speechless to be honest, especially when you realise what had happened, my phone was just pinging constantly. It was crazy.

“It got to a point, I remember John McGinn, I had set up Jack and Jack scored, and he said, ‘I’m buzzing, I’ve got you in my fantasy team’, and all the boys were like ‘yes, I’ve got you in my team’ while we were on the pitch – I think it was like 6-2 at this point.”

There was a slight transition needed from scoring goals and playing brilliantly in the Sky Bet Championship to doing the same thing in the top flight. Has Watkins been surprised at just how well he has settled in to Premier League life?

“It is going to help me raise my game and take me to the next level. I am a little bit surprised at how well I have played in some games but I feel like I have got good players around me and good people around me to push me in the right direction, so in a way I am not surprised.”

Listen to the full episode with Dave, Bayo and Ollie Watkins on Spotify or on Apple Podcasts now! Stay tuned for the upcoming shows, which are available on all channels every Thursday.

If you missed earlier episodes, don’t worry. You can listen back to interviews with Jamie Carragher, Micah Richards, Dominic Calvert-Lewin, Michail Antonio, and Sean Dyche on YouTube or on Apple Podcasts.

Ollie Watkins will be featuring in this week’s Super 6 round as his side face Tottenham, with only four per cent of Super 6 players backing Villa to take all three points – as always, the £250,000 is still up for grabs.

You too can get involved, and potentially scoop a quarter of a million pounds for free. All you need to do is correctly predict six scorelines. Play for free, entries by 6pm Wednesday.