Olivier Giroud has rejected an offer from Chelsea to extend his contract at Stamford Bridge, according to reports. The French striker’s current deal expires this summer and a number of clubs from around Europe are supposedly interested in signing up the 33-year-old.

Giroud had been close to leaving Chelsea in January after being frozen out under new manager Frank Lampard.

The French international agreed personal terms with Inter Milan before Chelsea pulled the plug after failing to secure a replacement.

And now reports from Italy claim Giroud is closing in on a move to the San Siro once again after rejecting a new contract proposal from Chelsea.

Tuttosport report that new contacts have been made between the Blues and Giroud’s entourage, with an offer of a one-year extension tabled. 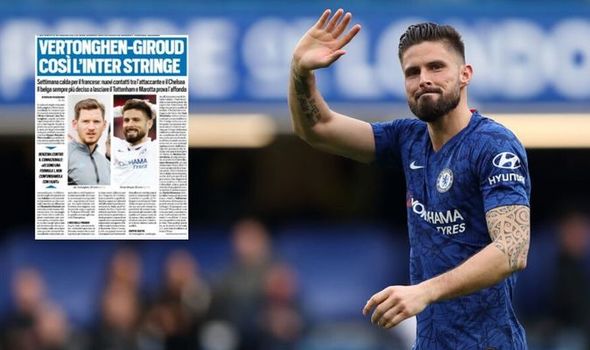 The Italian publication claim Giroud has said no to this deal as he plans to leave the club at the end of the current campaign.

This would leave the way open for Inter Milan to snap up the veteran striker, who is currently third on France’s all-time top scorers list.

Inter manager Antonio Conte is supposedly on the hunt for a player who can operate as a backup to Romelu Lukaku.

And Giroud fits the bill, having been a successful impact substitute for the majority of his Premier League career.

The report suggests Inter are expected to offer a two-year contract, which is more than Chelsea have traditionally given out to players over the age of 30, while they are also looking to give Tottenham’s Jan Vertonghen a similar package.

However, this latest development is in conflict with Giroud’s comments at the start of March when he assured reporters he wished to stay at Stamford Bridge.

When asked if he would like to remain with Chelsea, Giroud said: “Yes. Yes. Yeah, yeah, yeah. Of course.

“There are a few months to go, games to win and maybe another trophy, and after, you know, I think I have two (or) three nice seasons in front of me.

“It’s not the time to talk about contracts and everything but I will take a decision when it comes.” 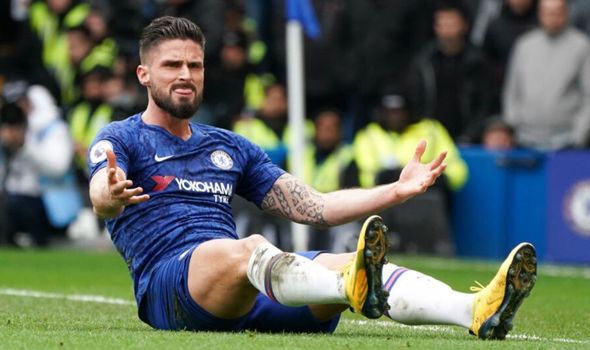 Giroud rejected a move to Newcastle in January while he was also attracting attention from Lazio and Tottenham.

But the 33-year-old was recalled to the Chelsea starting XI following an injury to Tammy Abraham and proved an able deputy, demonstrating his worth to manager Frank Lampard.

Giroud revealed how a heartfelt discussion with the Blues boss in January helped rejuvenate his Stamford Bridge career, having been previously overlooked while transfer talks were ongoing.

“It was a tough month for me,” Giroud said.

“I just spoke with the manager and I believed what he said, that I would get my chance and he has given me my chance. I have basically tried to give his confidence back on the pitch.

“I do my job the best that I can and I’m very happy to be back in the team.

“Of course, my confidence is better. The transfer window is behind me. I’m a Chelsea player, I’m happy here again and that’s the most important thing. Even if I don’t score, I try to help the team.”

Lampard praised Giroud’s contribution, saying: “He has always been engaged even when he has not been playing.

“That is why he can put in those performances when he comes in. Personality on the pitch, personality in the dressing room, quality to finish, selfless in his ways. He’s our player now. In January it might have changed, it didn’t, and I’m happy with that and we move on.

“He is strong; he has been around, won the World Cup, very good with the younger players around him, wants to train at a high level every day, understands his game, his attributes and how important he can be.”