With pressure mounting on Ole Gunnar Solskjaer, Manchester United again pulled a good win out of the bag when he most needed it – but how many times can we end up here?

On the face of it, United’s 3-1 win at Everton in the Saturday lunchtime kick-off did not tell us much about Solskjaer’s side that we did not already know.

Their defensive issues came straight to the fore as they were carved open with ease for Bernard’s opener, and they displayed the textbook attacking potency they have enjoyed against more open opponents since the manager arrived to deliver their rapid turnaround. Even before half-time, it was nothing we’ve not already seen over the last two years.

But just as fine margins were used to defend the narrow defeat United fell to against Arsenal last weekend, so too did they pave their way to victory at Goodison Park. Everton’s Lucas Digne hit a post with Dominic Calvert-Lewin unmarked at 1-1, and moments before Edinson Cavani’s injury-time third, Abdoulaye Doucoure may well have earned the hosts a point had he made any decent connection with Alex Iwobi’s tee-up. 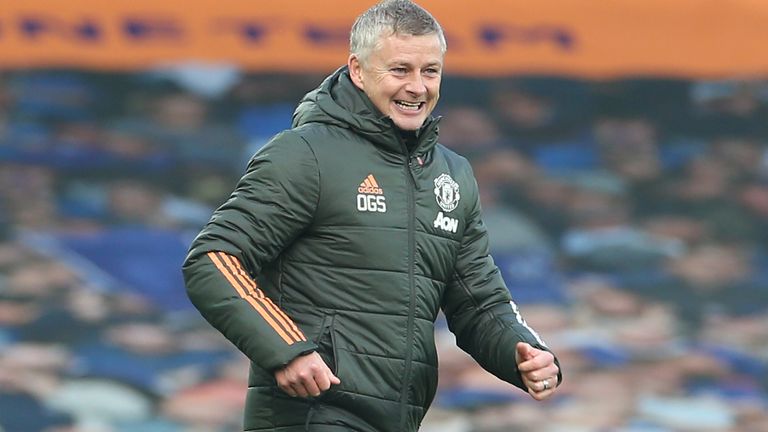 Those fine margins have long been the story of United’s rises and falls, especially under Solskjaer, but they cannot continue to define his reign indefinitely.

After Wednesday’s dire defeat in Istanbul there was little on paper to indicate the resilience they would show to avoid their worst start to a league campaign since 1987. Three points later, they are now in a better position than they were this time last season and look the potent outfit Solskjaer desires, and little surprise “character” was the word on his lips when speaking to BT Sport after the game.

His side had travelled most of the way across Europe and had barely two days to prepare since their midweek shambles, but ran nearly 5km further than they had done six days ago against Arsenal.

But it is all so predictable. Had 10th-placed United not beaten Brighton almost a year ago to the day, Solskjaer may have been sent his P45, but a convincing win, and two defeats in 25 to end the season, vindicated the Manchester United boss. Perhaps it was a turning point.

Perhaps not, because here we are again. With three points at Goodison Park assured and an encouraging performance to match, Solskjaer – who United still consider their long-term option – lived to fight another day. The quality of their performance, including the second-longest passing move across the league this season to craft their equaliser, deserves better than being questioned as another false dawn.

But the legacy they have built under Solskjaer, if not since Sir Alex Ferguson’s departure in 2013, is more conclusive. This must be what frustrates the manager the most; when the chips are really down, and it’s truly now or never, that’s when players finally pull it out of the bag.

Just to labour the point, this is what Manchester United are capable of when they are at their best. “We were set-up to fail,” Solskjaer fumed to BT Sport. “We’ve been to Turkey on Wednesday night, come Thursday morning we’re back in, we’re playing Saturday lunchtime, it’s an absolute shambles. I can’t praise the boys enough for the character they’ve shown – that’s all I want to talk about.”

But longer-term, all the Jadon Sanchos in the world aren’t going to close the gap on Liverpool and even Manchester City without showing this kind of backbone against, say, Crystal Palace. Or avoiding the manner of their utter humiliation by Tottenham last month.

The million-dollar question is… Why is it like this? “From a distance, it looks like it’s just nice,” according to Sky Sports pundit and former Arsenal forward Paul Merson. “If I’m George Graham – and we’re a successful team – if we got beaten like United did at Arsenal last weekend, I guarantee he won’t be coming out and talking about what a great bunch of lads they are. That’s the last thing he’s saying.

“It just comes across like it’s just a nice place to be.”

Things being too cosy may not account for United’s wonderous form in the second half of last season, which left them at around level par with expectations and earned Solskjaer the credit he deserved.

But here we are. Back to predictably unpredictable square one. The boom and bust of United’s streaky existence, just as it has been since the same since the day Solskjaer was named permanent manager.

For today, it’s all smiles and rightly so. United were largely excellent. They may well go on to convincingly beat West Brom and Southampton in their next two games. Perhaps even Manchester City after that. But how long before we’re all back here again? A month, maybe three, or next season?