‘We have worked on that, getting in the box in that situation more often’: Ole Gunnar Solskjaer reveals he has helped Anthony Martial in front of goal after Manchester United forward netted first hat-trick in win over Sheffield United

The 24-year-old endured a topsy-turvy time at Old Trafford following a fine debut campaign under Louis Van Gaal, with Jose Mourinho keen to sell an inconsistent forward who at times infuriated his manager.

But successor Solskjaer put his faith in Martial and gave him the number nine shirt back at the start of the season, and the former United striker helped him fine tune his work in front of goal. 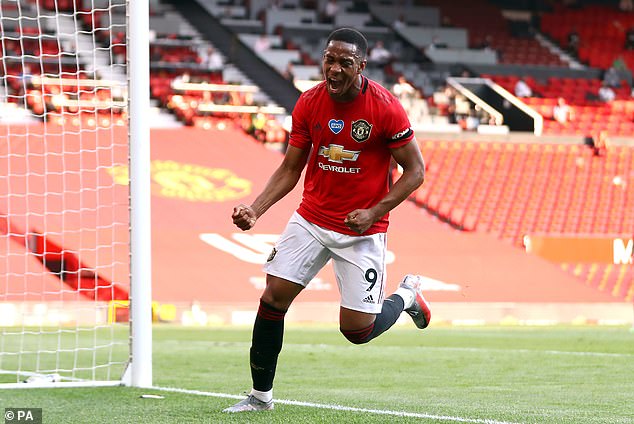 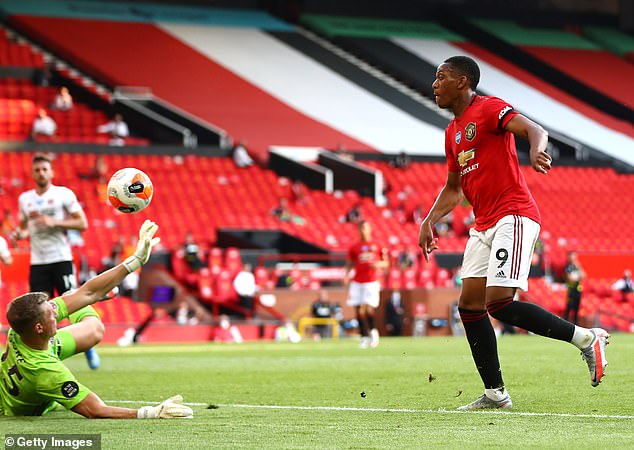 The 1999 treble hero has been rewarded with the France international’s best goalscoring season to date, with Wednesday’s impressive treble taking his tally to 19 and sealing a 3-0 win against the Blades at an empty Old Trafford.

‘Very happy for Anthony,’ Solskjaer said, having seen Martial score a superb scooped effort after two poacher’s finishes at the near post.

‘Of course when you get your hat-trick… it’s just unfortunate he didn’t celebrate with our fans. I thought our performance deserved a win, definitely.

‘The third goal was a great goal, but for me the first and the second were better. 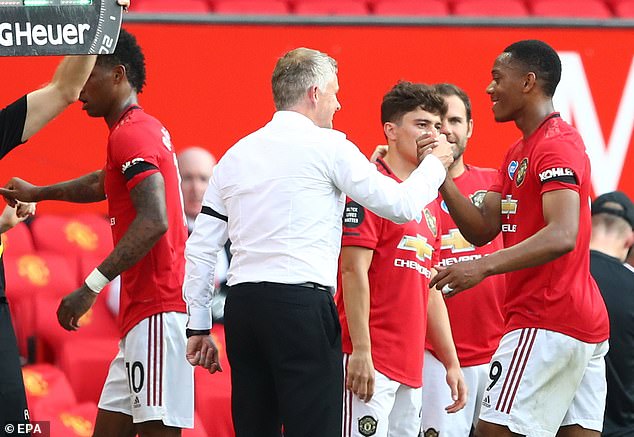 ‘He’s in the box, ready to go. We have worked on that, getting in the box in that situation more often.

‘At the near post he showed composure and I think as I said the first goal was vital the way he turns and gets himself into a position to score from Marcus (Rashford’s) cross, very pleased with that.

‘He’s getting more and more into those position he could have had one at Spurs a great turn and finish and a great save he’s in good form.’

It was a smooth evening for Solskjaer, but there was a hint of frustration given moments that lacked cutting edge. 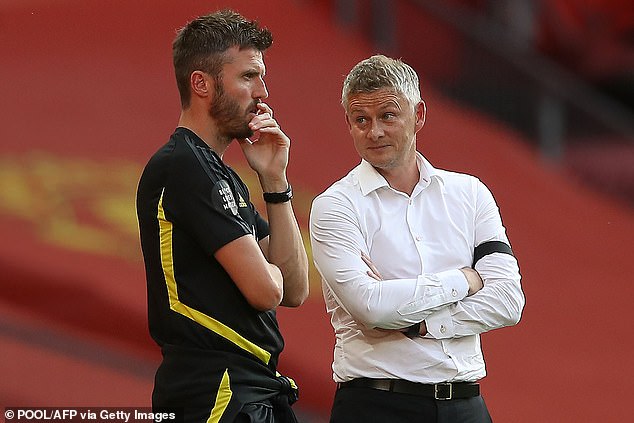 ‘At times it was very, very good football,’ the United boss said. ‘We could and should have scored more goals to put the game to bed before half-time.

‘Always worrying going into half-time knowing you should have scored goals the way we controlled the game, pressed and stopped them playing. Very happy with it.

‘Still more to come and we shouldn’t be 100 per cent happy with it.’

‘Paul is still a bit away from his best form,’ Solskjaer said. ‘That’s natural because it’s his first start since September. He’s been working hard.

‘I thought we controlled the game. Paul and Bruno showed some quality and it’s exciting for us to be working with talent like this. 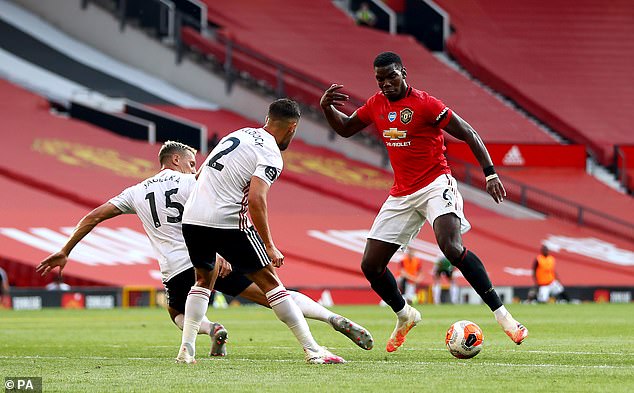 ‘Now it’s keep on working, onto the next one.’

As for the Blades, this defeat compounded Sunday’s loss by the same scoreline at Newcastle and the goalless draw at Aston Villa last Wednesday – an evening when faulty goal-line technology cost them victory.

Chris Wilder was angered by how much of an ‘easy night’ it was for the home side at Old Trafford, saying there are a lot of wrongs to right at Sheffield United.

‘You can imagine with the games coming thick and fast, it’s basically recovery time so no time on the training ground to right the wrongs,’ the Blades boss said.

‘There’s certainly a lot of wrongs at the moment in terms of my team’s performance, individually and as a tea 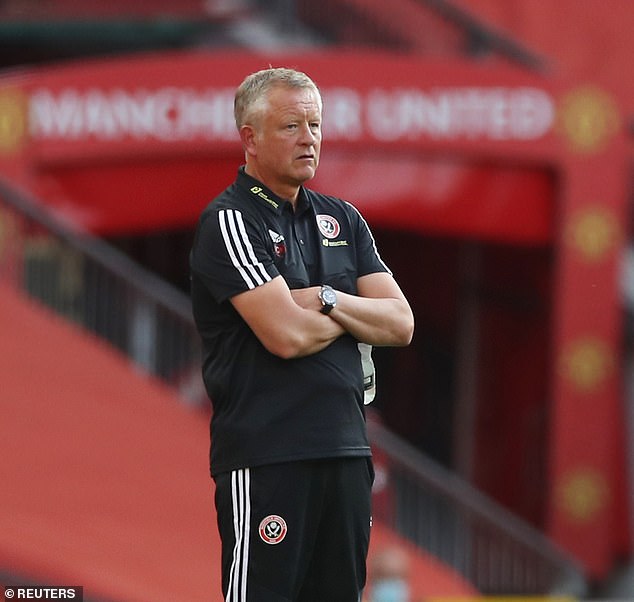 ‘We have got to find an answer from somewhere. We looked pretty tired.

‘I know when you’re chasing a ball for 90-odd minutes and world-class players are keeping it away from you, you are going to feel mentally and physically tired – and especially when you turn the ball over as cheaply as we did.

‘Whether it’s back to basics, whatever it is, we need to find an answer pretty quickly because I don’t want us to fall off the side of the cliff.’