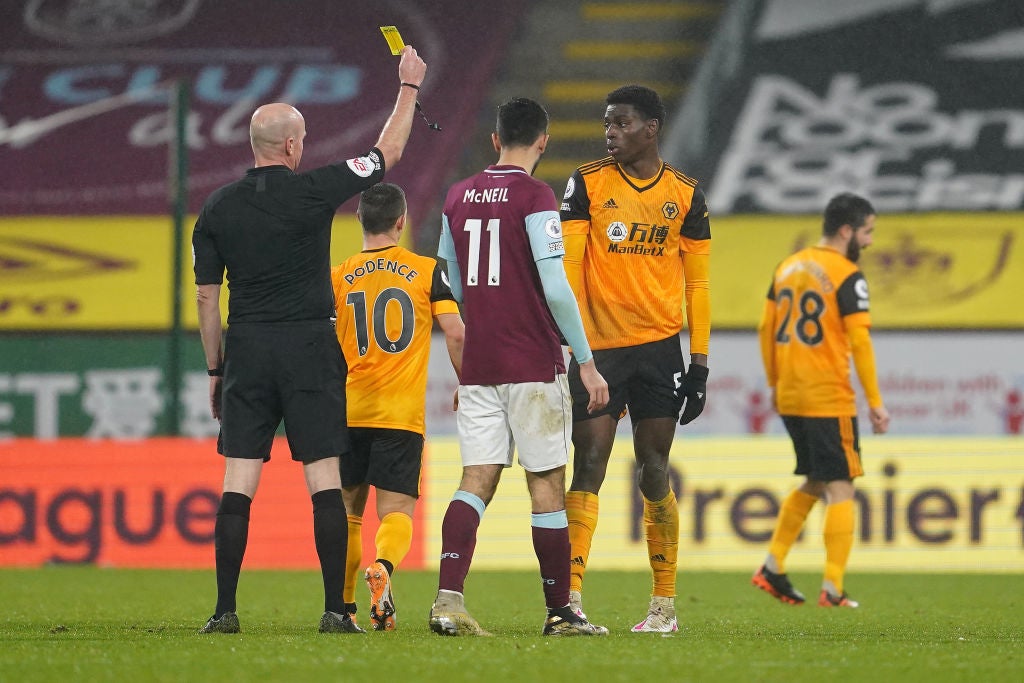 Lee Mason hands out a yellow card during Burnley vs Wolves

“For that I will apologise on my timing, but I won’t apologise for my words and thoughts.

“I never ever will judge or question the integrity of a referee. I never did it and I will never do it in my life.

“What I said is about the ability of the referee, what I felt and what I saw in the match and previous matches.”

The Portuguese added that it was “not about crucial mistakes or decisions”, more so “the way he handles the game”, and that he had to make his point after previous Wolves matches refereed by Mason.

“The Premier League is the best competition in the world – the only thing missing is the fans – and we expect high levels of performance and high standards,” Nuno said.

“As managers and players what we expect is from the referees to be confident, to maintain their authority on the pitch, to control the players and to handle the game.

“We want referees to improve because as managers we have to improve and I’m the first one when Wolves does not perform to admit it.”

Asked whether he would stick with his comment that Mason was not good enough to officiate in the top flight, Nuno replied: “The Premier League has the best system in referees.

“When we go to a matcPAh we expect a referee not to be a protagonist of the situation.

“It is a thought and a belief (about Mason) that we have before in matches.

“As I’ve said before I never did it (criticise referees) and I will never do it again. But I will not be comfortable if I did not say it in this particular situation, because we want to go to a match without worrying who is the referee of that game.

“But every time unfortunately we had problems, so we just don’t want them to repeat.

“We want the referee to let the game flow and especially to control the players.

“We have to make players understand it is a tough job, but at the same time they have to be cooperative and help the referees, as long as the referees have the dialogue like they always do.”