Former Melbourne Victory midfielder Josh Hope has walked away from professional football, blaming constant "abuse" from A-League fans on social media for taking away his love of the game.

Hope has been part of the Victory set-up since mid-2016 and played 41 games for the club in all competitions but was not offered a contract extension at the end of last season. 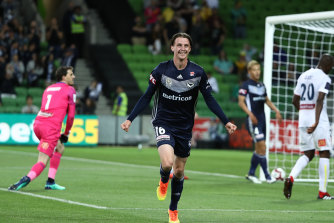 Josh Hope celebrates after scoring a goal against the Central Coast Mariners in November 2018.Credit:Getty

The talented 22-year-old struggled to cement himself as a starting player but showed glimpses of huge potential, and A-League sources indicate at least two other clubs were interested in signing him for the upcoming campaign, which begins late next month.

But Hope declared in a lengthy Instagram post that "it's time for me to call it in", saying he wanted to speak up about his struggles for anyone else who might be experiencing the same issues.

"The anxiety that comes with this shit is crazy, I never thought it would get to the point it did. I kept pretty quiet about it for a long time but I started to see it creep into my day to day life," Hope wrote.

"And at the end of the day it made me not enjoy my football.. at all.

"Critics come with all sports and only the strong survive, (so they say) but some of the shit is relentless. I was so over being treated like just a ‘player’. We aren’t just someone you see on the TV screen, we are people no different to anyone else.

"It didn’t just stop after the final whistle, it’s a constant battle with people who are supposedly meant to be supporting you. Some of the things I would see not only regarding myself but others was nothing less than abuse. And I’m not talking Football related!

"Ofcourse [sic] there’s going to be clueless people saying the first thing that pops into their head. But when it gets personal, to the colour of their skin, to how they talk, to a haircut. I get it, it’s a cruel world but geez if that’s how it’s going to be I don’t want to be a part of it."

Hope said stepping away from professional football was the hardest decision he's ever made but expressed a desire to "come back stronger" and return to the player he was "before this shit took over".

It's believed he will most likely seek a move to a Victorian NPL club.

Hope's agent, John Grimaud, tweeted: "Sad when a talented client feels he has to walk away from the game we love mainly to his experiences with online abuse. Some will say toughen up which is easy when they’ve never had to deal with the pressure of being a pro [footballer]."

Hope is not the first A-League player to have struggled to deal with intense abuse from fans.

Last year, former Sydney FC star Sebastian Ryall released a book, How to Die Today, in which he revealed how taunts from supporters about an incident that occurred early in his career sent him into a spiral of depression and drove him to two suicide attempts.

A report commissioned by the English players' union last month found that more than 3000 abusive messages were sent to 44 high-profile current and former players in first six weeks of the new Premier League season, 56 per cent of which were racist – prompting Manchester City star Raheem Sterling to question whether social media companies had the will to make any meaningful changes.

In other codes, ex-Brisbane Broncos coach Anthony Seibold, GWS Giants on-baller Callan Ward and Carlton AFLW star Tayla Harris are among those to have spoken out over how relentless social media trolls have impacted their lives.