Norwich moved back to the top of the Sky Bet Championship table – for one day at least – as they put a four-match winless run behind them by beating struggling Stoke 4-1 at Carrow Road.

Top-scorer Teemu Pukki scored twice in what was the Canaries’ biggest win of the season so far, with Todd Cantwell and Emi Buendia also on target.

It took Daniel Farke’s side a point clear of leaders Brentford, who will reclaim top spot if they avoid defeat at home to Barnsley on Sunday.

After an early escape, Norwich dominated the early stages and fully deserved their early lead.

Just 90 seconds had elapsed when Jon Obi Mikel somehow contrived to volley Sam Clucas’ corner wide when he had a clear sight of goal. 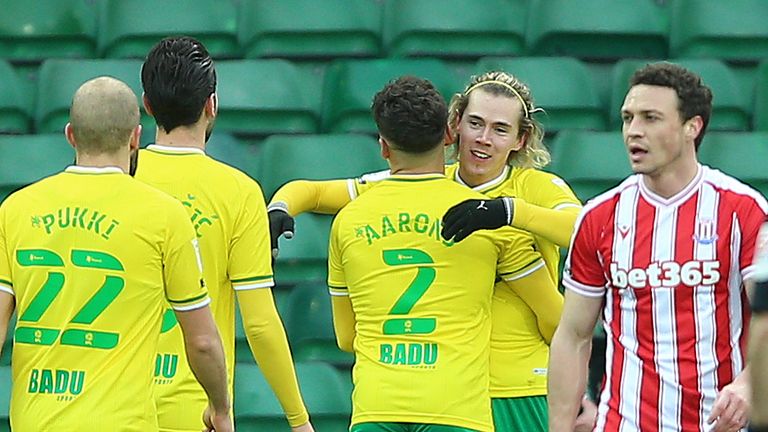 But the Canaries then took control and it took two brave blocks and a brilliant reaction save from Angus Gunn to prevent them from taking the lead after four minutes, with Pukki, Buendia and Max Aarons the unlucky home players.

Pukki then screwed the ball wide from a tight angle and Mario Vrancic headed straight at Gunn before Norwich got their noses in front in the 15th minute.

After going four games without scoring, Farke’s side finally showed some sharpness in front of goal as Cantwell picked the ball up on the right and played a neat one-two with Vrancic before firing a low drive into the bottom corner.

Stoke improved as the half wore on, with Steven Fletcher having a header rightly ruled out for offside, but it was Norwich who grabbed the second goal of the game just before half-time.

Buendia, back in action after a two-match ban, did well to charge down Morgan Fox’s attempted clearance and did even better to get the ball under control and square for Pukki to sidefoot home into an unguarded net.

It was a huge blow for Stoke, who were looking for a first win in 11 games, but they started the second period well and should have pulled one back in the 49th minute after Kenny McLean’s calamitous back pass had put Fletcher in on goal.

The Scotland international took the ball past Tim Krul but his shot lacked sufficient power and was comfortably cleared.

Fortunately for the Potters, Norwich did not learn their lesson and they were able to take advantage of another gift after 61 minutes.

This time recent signing Dimitris Giannoulis inexplicably chose to send a pass from the left across the face of the 18-yard box and it was cut out by Nick Powell, who had no trouble stroking the ball pass Krul.

It was a nightmare moment from the Greek left-back but he quickly atoned for his error as the hosts restored their two-goal advantage three minutes later.

A surging run down the left ended with Giannoulis cutting the back ball from the byline into the path of Buendia and the Argentinian produced a supreme first touch to guide the ball past Gunn.

Norwich wrapped up the points in the 78th minute when Buendia was brought down in the area by Joe Allen and Pukki confidently converted from the spot to make it 15 for the season.