Report and highlights from the Sky Bet Championship clash between Norwich City and Bournemouth at Carrow Road as goals from Sam Surridge, Arnaut Danjuma and Lloyd Kelly cancelled out Emi Buendia’s opener to earn a 3-1 victory for the Cherries

Norwich’s automatic promotion celebrations were soured as Jonathan Woodgate’s in-form Bournemouth side came from behind to beat the 10-man Canaries 3-1 at Carrow Road.

A fast start for the hosts – who had been promoted earlier in the day after Brentford and Swansea failed to beat Millwall and Wycombe respectively – resulted in a deserved opening goal, as Emi Buendia finished well after Teemu Pukki had held the ball up for him (5).

A red card for Norwich’s Dimitris Giannoulis (17) changed the course of the game, however, and substitute Sam Surridge levelled for the Cherries shortly after the break (50), before a stunning solo effort from Arnaut Danjuma gave the visitors the lead for the first time (57).

Lloyd Kelly’s low drive extended the lead and put the game beyond doubt (76) dealing the Canaries their first loss on home soil since a 1-0 defeat to Derby on October 3.

Owing to Watford’s defeat to Luton, Norwich’s advantage at the top of the league remains at eight points, with fifth-placed Bournemouth now level on points with Brentford, who have a game in hand.

How Bournemouth beat the champions-elect

Just 280 days after Norwich’s relegation from the Premier League was confirmed, results elsewhere earlier in the day secure safe passage back to the top flight – and it was clear from the outset that they wanted to mark the occasion in style.

Mere seconds after Buendia had mopped up from Kieran Dowell’s blocked effort flashed a shot across the face of goal, the Argentine fired the hosts ahead with a clinical finish after Pukki had held the ball up for him and threaded a cute through ball into his path.

But just as they were beginning to get forward at every opportunity and build up a head of steam, the game plan took a hit when Giannoulis was shown a straight red card by referee Graham Scott after a lunge on Bournemouth midfielder Ben Pearson. 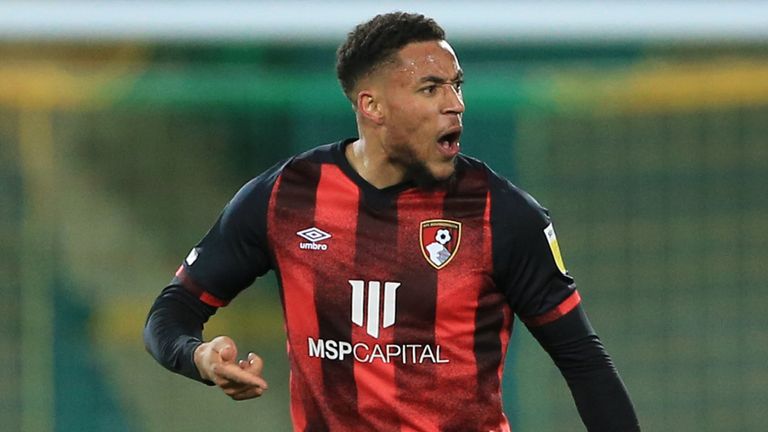 The Cherries had the ball in the net themselves as the frenetic start continued. Danjuma curled the ball towards the bottom corner, with his shot helped over the line by Dominic Solanke, though the striker had strayed offside in the build-up and the goal was swiftly chalked off.

Though it had looked like the visitors would be on the end of an onslaught early on, the effect of the red card meant it was quite the opposite after the break and they were level minutes after the restart when Surridge tapped home at the far post after a cross had been diverted into his path first by Andrew Omobamidele and then Tim Krul.

Danjuma then turned the game on its head in style. The in-form forward made strides in from the left flank to a central spot, picked his spot and beat fellow Dutchman Krul with a stunning strike from 20 yards.

Daniel Farke’s men offered little thereafter and Kelly made sure of the victory when he caught Krul off guard by collecting a pass from Danjuma and arrowing into the bottom right corner to register his first goal for the club and secure a sixth straight win for Bournemouth.

Man of the match – Arnaut Danjuma

“I was so impressed with him tonight. He turned the game around for Bournemouth and capped his performance with a super goal.”

Norwich are next in action at 6pm on Tuesday, April 20, when they host Watford at Carrow Road, while Bournemouth return the following day, when they travel to The Den to face Millwall at 6pm. Both matches are live across Sky Sports Football.