Norwich 0-5 Arsenal: Gunners make it five wins in a row to cement fourth place with Bukayo Saka netting twice to leave struggling Canaries stranded at the bottom of the Premier League table

Tougher tests are looming but Arsenal’s fluent progress continued with this demolition of Norwich.

Bukayo Saka led the way with two goals, either side of one by Kieran Tierney, followed by a penalty converted by stand-in captain Alex Lacazette and a late goal by Emile Smith Rowe.

It is five wins and a blaze of 19 of goals in five games since Mikel Arteta axed captain Pieree-Emerick Aubameyang.

Perhaps not against the strongest opposition. Norwich were easily brushed aside here with the look of a team doomed to the drop. 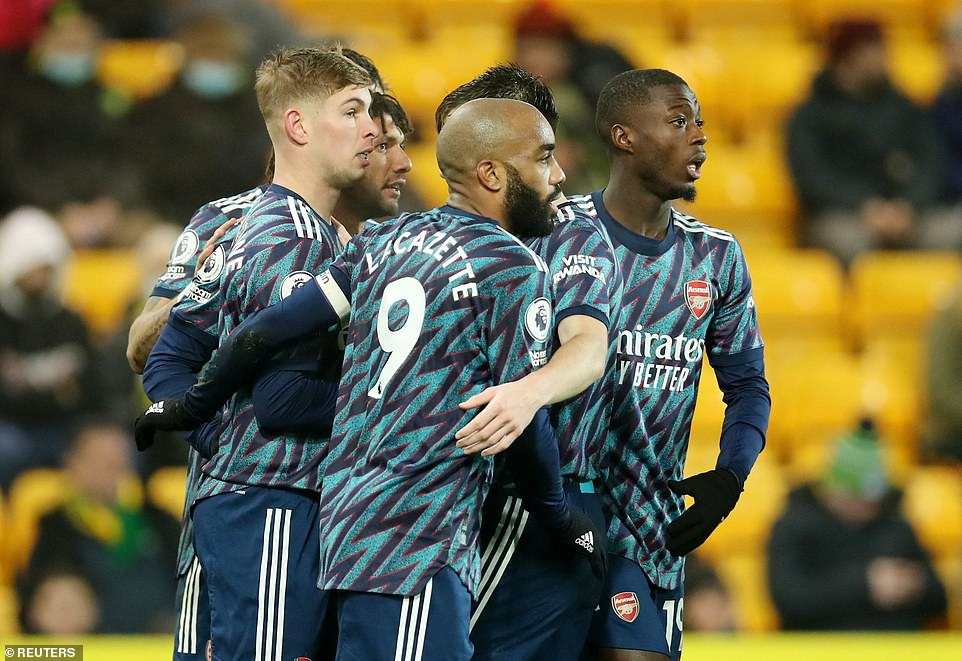 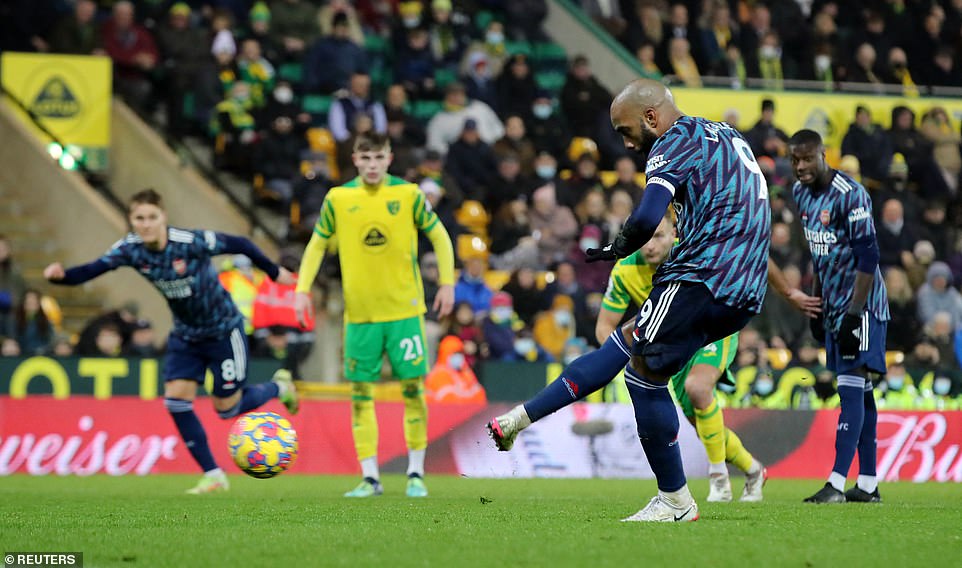 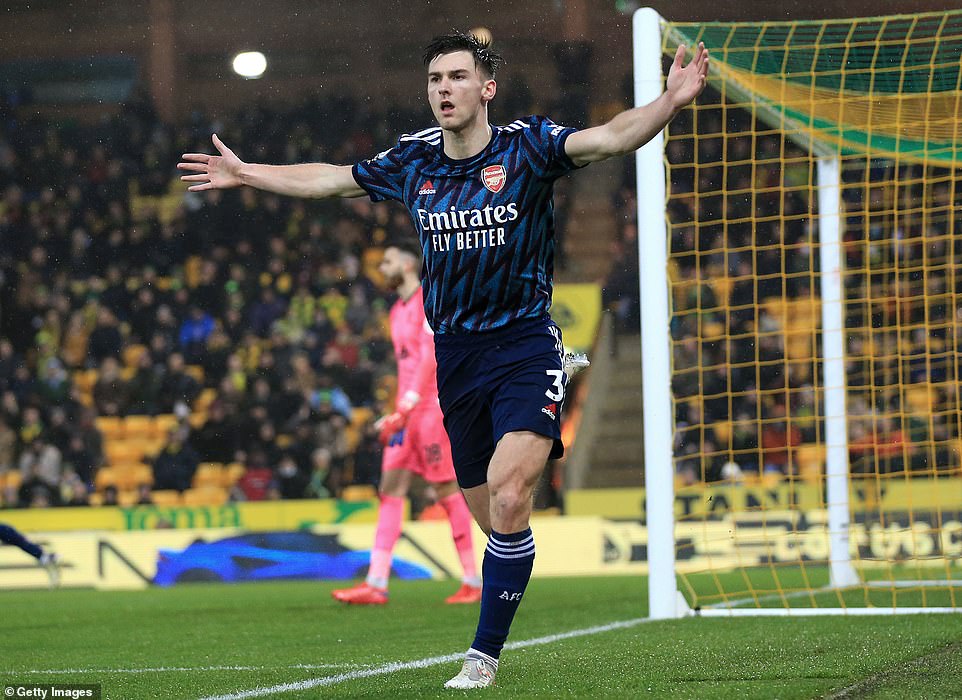 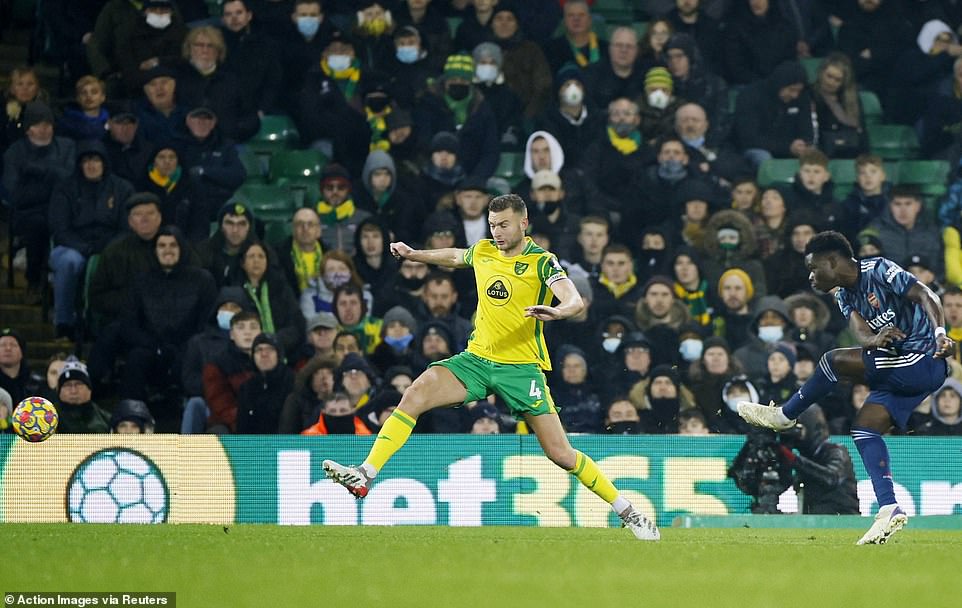 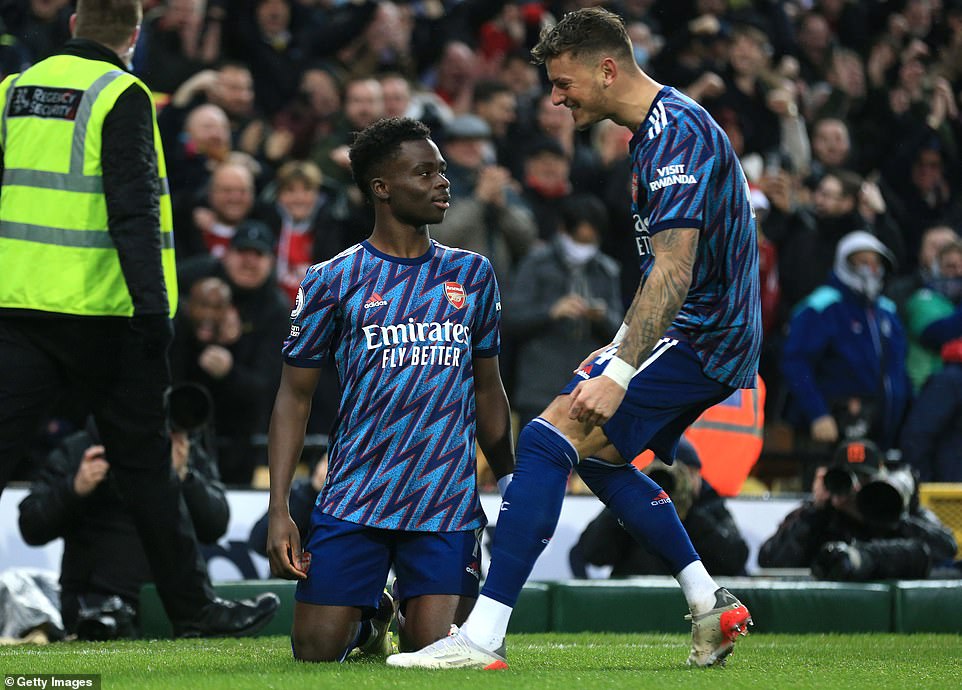 Arsenal have a healthy balance. They are solid at the back and with a goal threat up front. They are back into contention for the top four but the hard part starts now for Arteta.

They are back in action in an early game on Tuesday against Wolves, who have been resting, and then face Manchester City on New Year’s Day.

By then, we will have a better idea of precisely what Arteta’s team is made of. For now, we must admit they are improving fast.

Arsenal seized control in the sixth minute when Saka open the scoring after a slick move down the left and an assist from Martin Odergaard. Arriving from the right, he took a touch, shifted the ball onto his left foot and found the net for the second game in a row.

Norwich keeper Angus Gunn was too easily beaten, diving low to his right. Not the start he wanted on his first Premier League appearance since conceding nine for Southampton against Leicester, more than two years ago.

First-choice ‘keeper Tim Krul was among the Covid absentees, which hit both sides. Arsenal were devoid of right-backs. Takehiro Tomiyasu, Cedric Soares and Ainsley Maitland-Niles all recorded positive tests, forcing Arteta to shuffle what has become a settled defensive unit.

Rob Holding came in alongside Gabriel as Ben White moved to right-back, Still, there was no recall to the fray for Pierre-Emerick Aubameyang, the captain frozen out since a disciplinary breach, although it did not interfere their attacking power.

Arsenal spent the first half hour at Norwich comfortably on top, with Saka and Odegaard particularly creative and influential, revelling in the space generously afforded by their hosts.

They ought to have scored more. Alex Lacazette headed wide from one of Saka’s crosses when he should have done better and Gunn saved an effort fired straight at him from 25 yards by Gabriel Martinelli.

Norwich flickered into life as the half-time interval loomed. Przemsyslaw Placheta broke clear on the left and drew a save from Aaron Ramsdale, and Arsenal’s goalkeeper dashed from his penalty box to clear from Teemu Pukki. 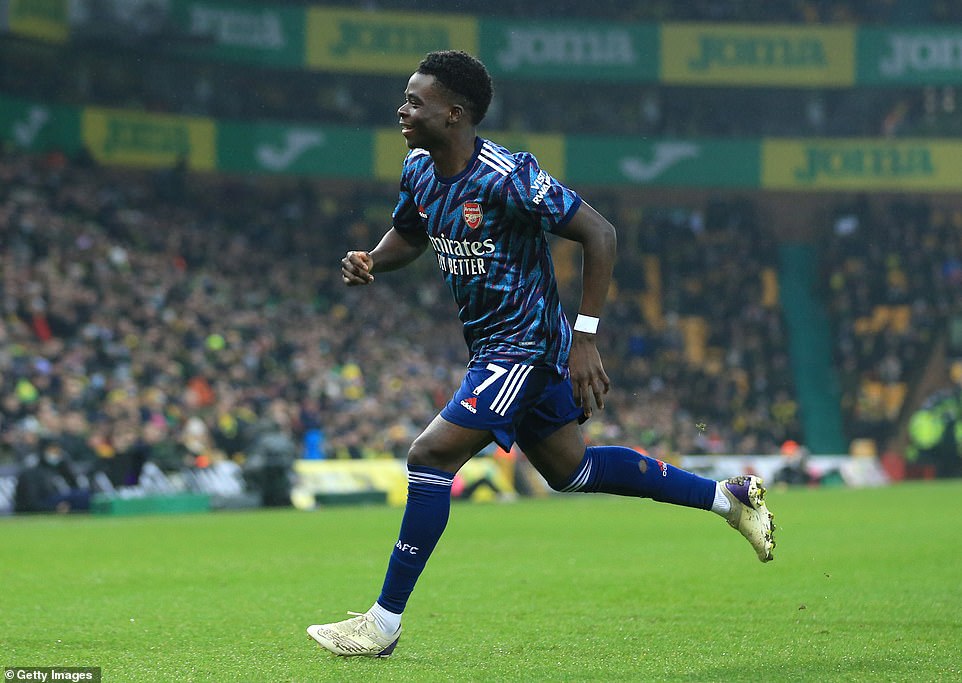 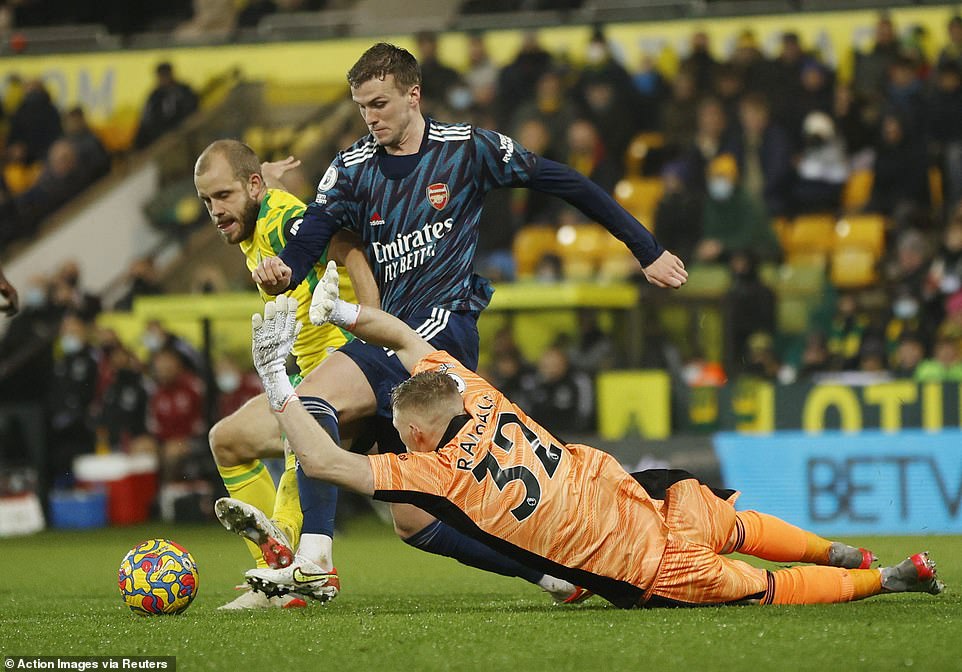 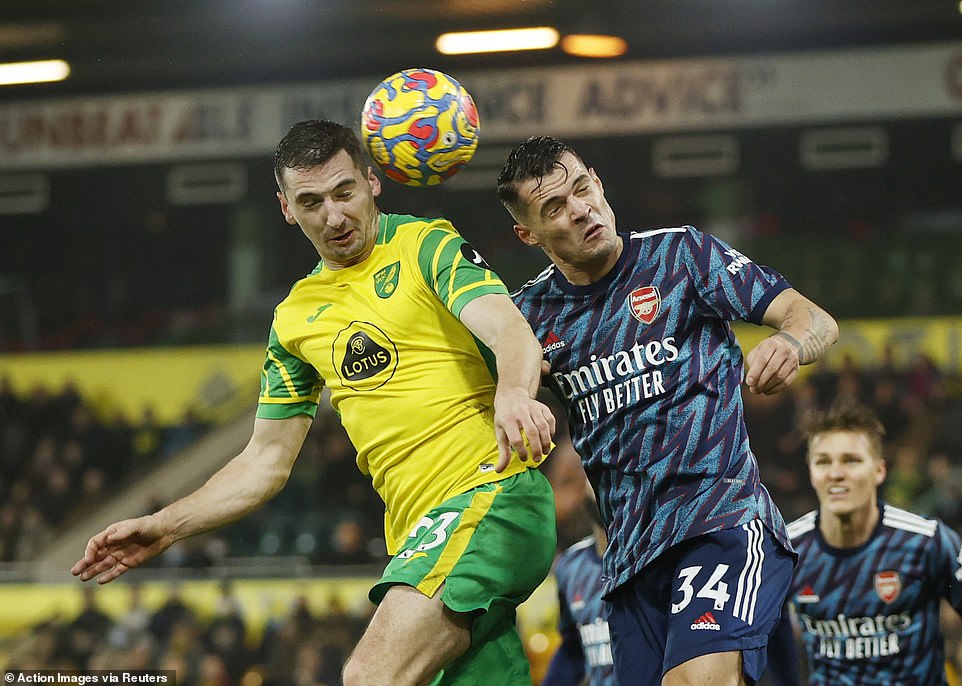 There were a couple of minor flashpoint and the home crowd stirred but, just as a genuine contest threatened to emerge, Arsenal scored their second, another eye-catching move, sweeping from right to left via Odegaard.

Tierney came charging forward from left-back, took Odegaard’s pass on the run, advanced and applied a precision finish with his second touch, low across Gunn and in off the far post. It was his first goal of the season.

Martinelli thought he had scored the third when a deflected shot took a heavy deflection, spun over Gunn and dropped in only to find he was offside. The flag went up as soon as the ball hit the net.

Saka made it 3-0 with his second of the game. He collected a pass from Lacazette, skipped past full-back Brandon Williams and curled in a low shot from the edge of the penalty area.

Lacazette added the fourth from the spot after he was ruled to have been fouled from behind by Ozan Kabak and Smith Rowe came on to make it five, tapping in from a cross by Nicolas Pepe. 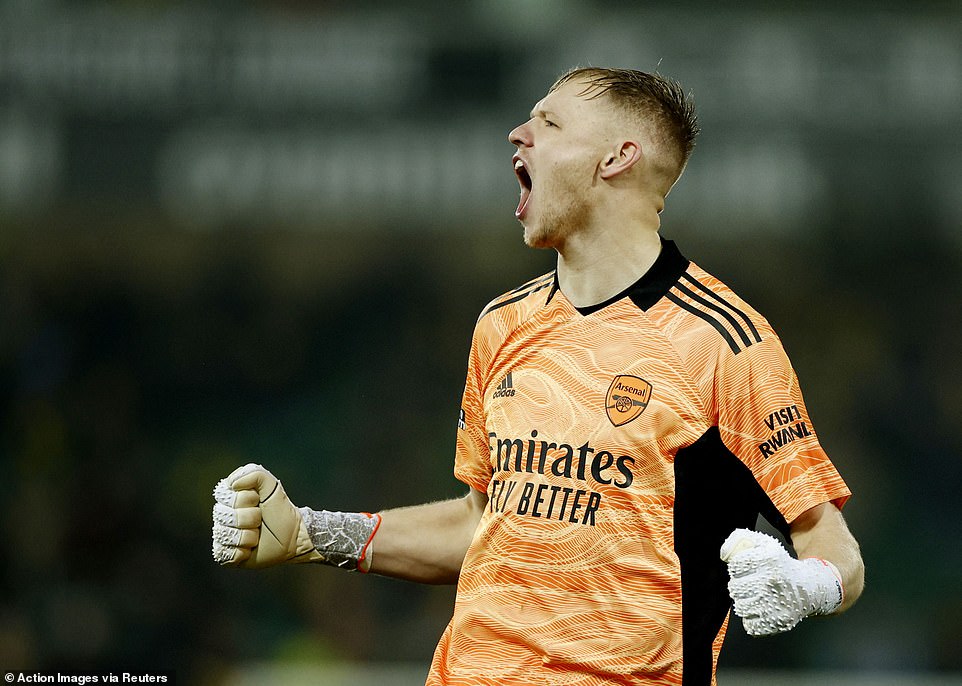